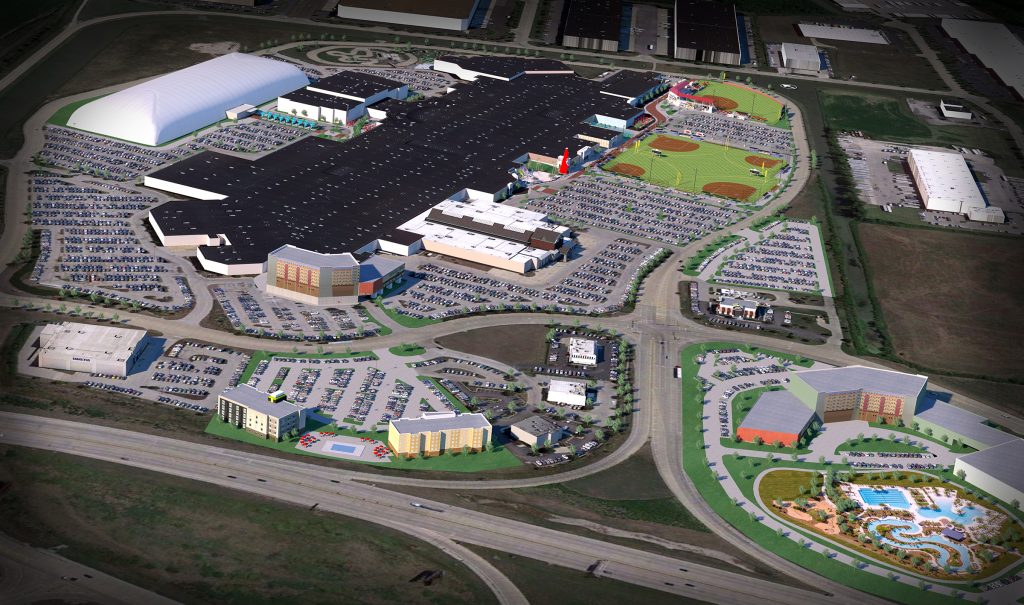 The St. Louis region could be home to a one-of-its-kind $63 million youth sports mecca as soon as next year, with a developer closing this month on the former St. Louis Mills mall and transforming it to the “POWERPlex.”

The Hazelwood City Council approved the final terms and a settlement agreement between the property’s former owners and Big Sports Properties, the project’s lead developer, which paves the way to create the 160-plus acre youth sports tourism destination.

POWERplex owners say they will host more than 180 major sports tournaments and special events per year.

“If you can dream it, we can host it,” said Dan Larson, one of the five Big Sports Properties project investors.

The public-private partnership will include six major sports venues, 13 restaurants, hotels and more than a dozen sports-focused retail stores. Many of the venues will open in early 2020, with substantial completion of all the sports complexes slated by fall 2020.

The mall is the current home of the practice facility for the St. Louis Blues, but the team will eventually move to a new venue in Maryland Heights, leaving their current Ice Dome for youth hockey.

“Most people in the country have never seen anything of this size and scope,” said managing partner Dan Buck.

Hazelwood City Manager Matthew Zimmerman said visitor projections are in line with other sports facilities, except “nothing like this has been built in America.”

If it all works out, owners say the complex’s visitors could outnumber Six Flags or Grant’s Farm, while revitalizing North County and an old mall property.

“This is an ambitious proposal, and I want to credit Councilmember Harder for his leadership over the past two years as he recognized, when this proposal didn’t quite make it in Chesterfield, he recognized the opportunity at the Mills project and put the developer together with the opportunity,” Page said. “We are excited the County Council was able to approve… tourism funds to invest in this project… to help this development succeed, bringing new jobs to St. Louis County and attracting visitors outside to spend their money in St. Louis County.”

Six new sports venues specifically created to accommodate the needs of each sport are being designed both inside and outside the 1.5 million-square-foot former St. Louis Mills mall. The campus will also include the largest indoor dome in America, spanning 750 feet by 300 feet feet. It will soar 120 feet into the air.

“It will be the biggest air supported structure we’ve ever built,” said Scott Biason, the vice president of St. Louis-based Arizon, the manufacturer of the air structure. “It’s only appropriate that our biggest dome ever is here in our hometown.”

More than a dozen local sports teams, clubs and organizations already have agreed to call the $63 million sports campus home for practices, leagues and competitions,

Among those baseball, softball and volleyball teams, more clubs are being added weekly as the project moves toward the construction phase in September.

“This is like scoring a huge goal in overtime,” said Lloyd Ney, co-owner and operator of the Ice Zone, which has been at the future POWERplex for over 15 years. “What the city and Big Sports Properties have achieved in a very short time frame for all the remaining land owners is nothing short of miraculous. We were facing a disaster scenario where we would not be able to fulfill our mission of growing youth ice sports and now we get to be a part of a thriving, new sports destination campus. It’s all very exciting.”

The largest anchor tenant, Cabela’s, has more than three years remaining on their current lease and is excited to partner with the POWERplex in a wide range of ways. Hope Church, which has nearly nine years remaining on its lease, is anticipated to stay, providing a good resource for Christian sports families looking for a Sunday service to attend between games.

Bradley Beal is also on board the Big Sports Properties ownership team. Beal, a current NBA All-Star for the Washington Wizards, is a St. Louis native. “This is something that doesn’t just transform sports in our region. This place will change lives and impact kids for decades to come. I’ve never been more excited to make a dream become a reality.” The complex will headquarter his nationally ranked Elite Basketball Club.