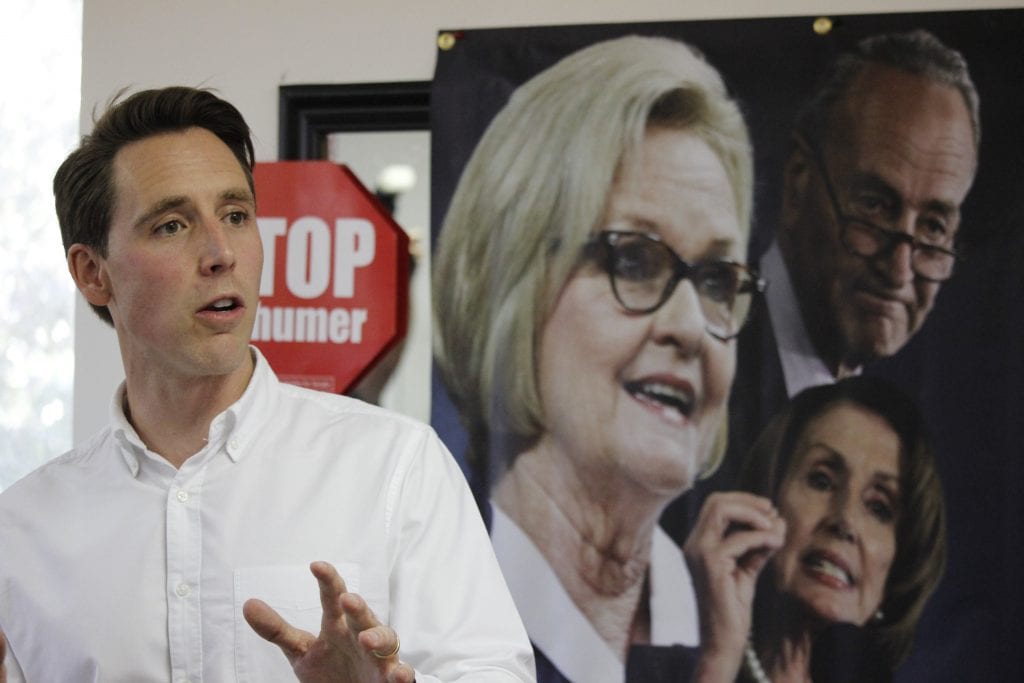 After a day of insurrection and deadly violence at the U.S. Capitol, Missouri Republican Sen. Josh Hawley continued his push on Wednesday to overturn the results of the 2020 presidential election.

But his efforts were for naught, as lawmakers early Thursday certified Electoral College votes declaring Joe Biden the winner.

Hawley, who became the public face of the push in the Senate to block certification of Biden’s victory, is facing accusations that his rhetoric and actions in the days leading up to the vote contributed to the violence that erupted Wednesday.

Among the loudest critics is his political mentor — former U.S. Sen. John Danforth — who Thursday afternoon told the St. Louis Post-Dispatch that working to get Hawley elected to the Senate in 2018 “was the worst mistake I ever made in my life.”

Hawley made headlines with his announcement that he would object to certifying Biden’s win, arguing that Pennsylvania’s electoral votes should be disqualified because he believes a 2019 law approved by the state’s Republican Legislature and sustained by the state’s supreme court violates the Pennsylvania Constitution.

In the days leading up to the vote, Hawley was a fixture in the media, hyping his objections and decrying protests outside his Virginia residence. He sent a fundraising email Wednesday morning focused on his efforts to overturn the election, and was photographed pumping his fist to the crowd outside the Capitol that morning.

From our Francis Chung, Sen. Josh Hawley greeting protesters in the east side of the Capitol before riots began. pic.twitter.com/I8DjBCDuoP

Yet he remained silent for most of the day after the pro-Trump rioters forced their way into the Capitol and on to the floor of the House and Senate, endangering lawmakers, staffers and reporters who were eventually evacuated to an undisclosed location.

He eventually tweeted a thank you to Capitol Police and called for the violence to end. Later that night, after the riots were quelled, he spoke on the Senate floor.

“We’ve seen a lot of violence against law enforcement, and today we saw it here in the Capitol of the United States,” he said. “And in this country, in the United States of America, we cannot say emphatically enough, violence is not how you achieve change.”

In Missouri, Hawley is facing an avalanche of criticism.

“I have never regretted a vote as much and as quickly as my vote for  (Josh Hawley) in 2018,” tweeted state Rep. Shamed Dogan, a Republican from Ballwin. “His refusal to accept the legitimacy of Joe Biden’s election, even after today’s violence, is an embarrassment.”

The Student Bar Association of the University of Missouri Law School, where Hawley taught before entering politics, publicly called on Hawley to resign “for the sake of our state, for the benefit of our country, but most importantly, for the protection of the rule of law.”

Bishop Bob Farr of the Missouri Conference of the United Methodist Church said the violence on Wednesday was not surprising because the president and Hawley have “been whipping up fear and anger among their radical supporters for weeks, months, even years.”

When it came time to vote, Hawley held firm in his opposition to Biden’s victory. However, some Republicans backed away from their earlier objections.

“I cannot now in good conscience object to the certification of these electors,” said Republican Sen. Kelly Loeffler, who lost a runoff race in Georgia on Tuesday. She added that the violence that played out was “a direct attack on the very institution my objection was intended to protect.”

Nine hours after the Senate began considering the objection to Arizona’s electoral votes, senators rejected it, 93-6, late Wednesday. Hawley was among the six.

Hawley outlined his complaints about Pennsylvania’s 2019 law expanding who is eligible to vote by mail. Neither of Pennsylvania’s senators, Republican Pat Toomey and Democrat Bob Casey, supported Hawley’s objection to the state’s election process. Casey decried it as an “attempt to disenfranchise” Pennsylvania’s voters.

Those objections and the day’s tumult did not change the final result announced by Vice President Mike Pence: a certification of Biden winning 306 electoral votes and Trump coming in second with 232.

As Congress resumed the certifying process, top lawmakers from both parties condemned the violent mob that stormed the Capitol as a group of “thugs” and “goons.”

Minority Leader Chuck Schumer (D-N.Y.) called it “one of the darkest days” in the nation’s history, casting blame on Trump, who had urged supporters rallying on the National Mall to march to the Capitol and did not seek to tamp down the violence.

“This mob was in great part President Trump’s doing,” Schumer said. “Today’s events certainly  would not have happened without him.”

While there have been fatal shootings and other violence at the Capitol, Wednesday’s insurrection was unlike anything seen in modern history. The last time the Capitol was breached was in 1814, when it was burned down by the British during the War of 1812.

The rioters swarmed past barricades and broke windows to enter the Capitol, which has been closed to the public amid the coronavirus pandemic. Photos and videos showed Trump supporters hanging off the balcony in the Senate chamber and trespassing in the offices of lawmakers, including House Speaker Nancy Pelosi (D-Calif.).

In the House, lawmakers and Capitol Police officers had barricaded the entrance as rioters busted glass panels and defaced the walls. Outside that chamber, a woman was shot amid the melee and later died at a D.C. hospital.

Pelosi said the violent actions from the rioters would not prevent the House members from finishing their duty to certify the presidential election results.

“A shameful assault was made on our democracy,” she said.

On the House floor, Rep. Ruben Gallego (D-Ariz.) begged his Republican colleagues to withdraw their objections to the Electoral College and to do the right thing and stop spreading falsehoods of election irregularities.

House Minority Leader Kevin McCarthy (R-Calif.) condemned the mob that tore through the Capitol and called for respect for differing opinions. For weeks, McCarthy has supported GOP lawmakers in challenging the presidential results and has supported lawsuits to overturn results in states that Biden won.

“No one wins when this building and what it stands for, is destroyed,” he said.