With Blues celebrating historic victory, the Stanley Cup could be headed to South County 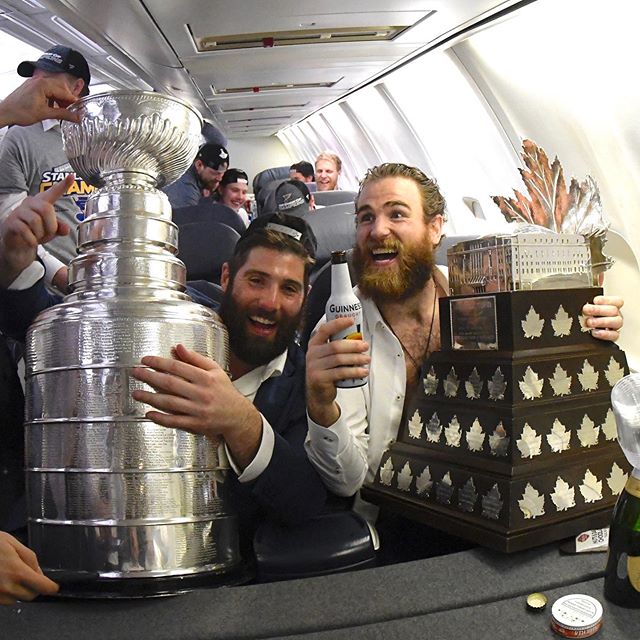 The St. Louis Blues won their first-ever Stanley Cup Wednesday, and they will be celebrating with fans for days and weeks to come, starting with an epic downtown parade that fans have been waiting more than 50 years to see.

The Blues defeated the Boston Bruins 4-1 in Game 7 in Boston to earn one of the most difficult championships in sports. The team had been the oldest existing franchise in the NHL that had never won it.

And in the festivities, Lord Stanley’s Cup could even be making its way to South County. Hometown player Pat Maroon’s son told a reporter that his father will bring it to Oakville.

Maroon, an Oakville native and 2007 Oakville High School graduate, is the son of Oakville’s Phil and Patti Maroon and the father of 10-year-old Anthony Thomas-Maroon, a player for the Meramec Sharks who is the primary reason Pat Maroon returned to St. Louis on a one-year contract to play for his hometown team.

Maroon smiled when a rinkside reporter called him the “Pride of Oakville” after Game 7.

“It means the world to me to bring the Stanley Cup back to St. Louis,” Maroon said. “Being from St. Louis, being a Blues fan all my life and to do it, to put this jersey on and be with the boys – I just can’t wait to party with St. Louis, the community. We all came together, the city came together, we re-amped this city, and I’m so proud of these guys…. We freakin’ did it, we get to go home and we get to take the Stanley Cup home to a city that’s been waiting 40 freakin’ 9 years, I can’t wait.”

And although all Blues fans are excited for the team’s victory, Oakville hockey fans are particularly proud of their hometown player.

Oakville resident and Mehlville Board of Education member Samantha Stormer joked that she would make a motion to rename the school district “Maroonville” after what could be its most famous alumnus.

“It goes to show that our kids here can do anything, and kids getting to see that is amazing,” Stormer said.

After taking out a full-page ad newspaper ad thanking the fans that had leaked ahead of Game 6, Blues owner Tom Stillman is celebrating alongside the players:

Enjoy these moments, Tom. And thank you for helping bring a #StanleyCup to St. Louis. #stlblues #WeAllBleedBlue pic.twitter.com/dXUA29hOX7

The winner of the playoff MVP trophy, the Conn-Smythe Trophy, was Ryan O’Reilly, who is the first player in history to score in Games 4, 5, 6 and 7 of a Stanley Cup Final. The vote was made public Thursday, and O’Reilly took 13 of the possible 18 first-place votes, with goalie Jordan Binnington taking the other five. The contingent from St. Louis on the panel, two sports writers from the Post-Dispatch, selected Binnington.

And after a late flight after the game, the Stanley Cup is now home in St. Louis.

Now the players can commence with the Stanley Cup-celebrating traditions, including drinking Budweiser out of Lord Stanley’s mug.

Maroon said he would be “drinking out of it, I don’t know, just having fun with it, showing it off to all the fans.”

St. Louis made history as possibly the first championship winning team to celebrate a victory simultaneously in three stadiums — the TD Garden in Boston, but also the sold-out watch party inside the Enterprise Center in St. Louis and a packed watch party at Busch Stadium, home of the Cardinals.

The Busch Stadium fans who weren’t under a roof were soaked during an early downpour in the first period, but they didn’t mind at all.

We’ve waited 52 years, you didn’t think a little rain would stop us from cheering on the @StLouisBlues! pic.twitter.com/qmYdhdD2y7

And with another seven-game series wrapped up, we can’t help but look bak at Pat Maroon’s two gamewinning goals against the Dallas Stars in Round 2 of the playoffs, when the “Pride of Oakville” put the city on his shoulders and got them to the next roun.

Who in South County could ever forget Maroon’s gamewinning double-overtime goal in Game 7 against the Dallas Stars?

And to make this even more of a storybook ending, the goalie that Maroon scored that goal on, St. Louis native Ben Bishop, has family members who started rooting for the Blues once he was eliminated from contention. Bishop’s father owns the Bishop’s Post bar in St. Charles and hosted a Stanley Cup Final Game 7 watch party. If the Blues won, he promised to buy everyone’s drinks and appetizers.

When I was growing up, I loved those “History Will Be Made” commercials the NHL put out during the Stanley Cup Playoffs.

I decided to make one for Pat Maroon’s game-winning goal in double overtime of Game 7. pic.twitter.com/CXxBca73Ww

“I may have taught him a few things,” young hockey player Anthony said in an interview after his father’s gamewinning goal.