Board agrees to seek grants for bathrooms at three parks 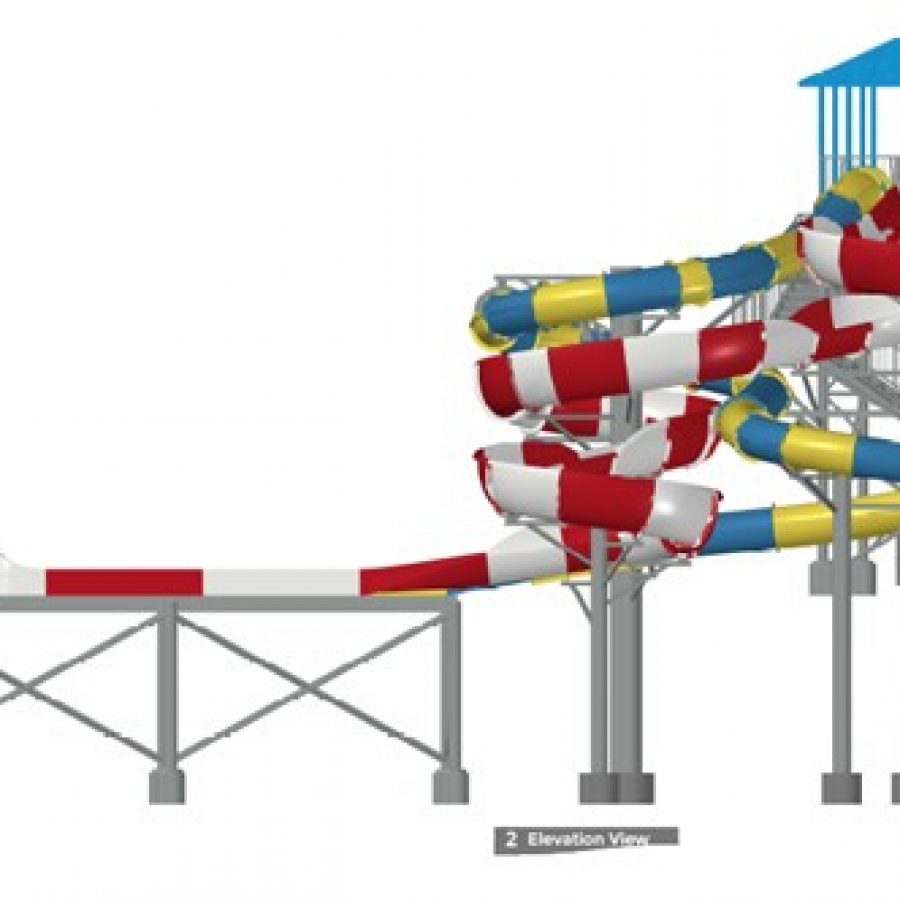 A rendering of the two waterslides proposed at the August meeting of the Sunset Hills Board of Aldermen.

Sunset Hills City Administrator Eric Sterman removed a pair of new water slides at the Aquatic Center from the city’s five-year capital improvement plan last week after they were rejected by the Board of Aldermen last month.

The Capital Improvements Committee unanimously recommended an updated version of the plan without the water slides when it met Aug. 28 to finalize its latest five-year recommendation for the Finance Committee and board.

The slides were in the plan and came heavily recommended by the city’s Parks and Recreation Advisory Board and Pool Committee, but aldermen rejected them 4-2 Aug. 9, citing cost and liability concerns.

If aldermen agreed to the slides, the city would have jointly applied for St. Louis County Municipal Parks Grant funds with Grantwood Village for the new attraction.

The initial bid to bring the country’s first stand-up water slide to Sunset Hills was rejected in July, but Parks Director Gerald Brown brought the idea back without the stand-up slide to potentially make the August grant deadline.

But aldermen rejected the slides by a greater margin the second time, as Price changed his vote.

“It would seem to me that getting our parks up to date may be more beneficial than a slide,” Price said.

The best thing about the current Aquatic Center is its family atmosphere, and that has not changed in the 20 years she has been going to the pool, frequent pool user Karen Fox said.

Speaking about the stand-up slide, she said, “I didn’t want anything that would bring people from all over the place to our community.”

The slides were runoff slides that would not have emptied into any body of water, Brown said.

Musich read letters from two city residents who opposed the slides for various reasons. Tom Blackwell suggested that anyone wanting to use a slide could go to the aquatic centers at Crestwood, Kirkwood, Des Peres or Webster Groves rather than Sunset Hills, which he argued is already crowded.

Even with the grant, she said, “I still think it is too much to ask Sunset Hills citizens to pay for this.”

The alderman reading her letter agreed that he could not get on board with the cost, even once the grant money was subtracted.

Mayor Pat Fribis noted that the slides would not be funded through property taxes, but by a voter-approved sales tax that has to go to parks and stormwater improvements.

Liability was also a concern for critics.

Musich raised the fatal incident last year on the 168-foot-tall Verruckt ride at the Schlitterbahn water park in Kansas City, Kan., that resulted in the death of the 10-year-old son of a Kansas state lawmaker. The water park settled a subsequent lawsuit from the boy’s parents for $20 million and tore down the slide.

The slides proposed in Sunset Hills would have been 24 feet tall.

“I realize it’s comparing apples and oranges, but there can be serious injuries to people falling less than 15 feet,” said Musich, who is a retired physician. “We can sustain severe injuries to the brain and lumbar spine. I think that liability is not worth the extra $300,000 to $400,000.”

Water slide opponents suggested alternate ways for the city to spend the money.

The money could instead go to the salaries of employees “who do such a great job for our city,” Musich said.

The city should look at providing other services like leaf pickup in the fall, Ludlow suggested.

But Public Works Director Bryson Baker said that most cities that pick up leaves want to get out of what becomes a “huge expense.”

Leaf pickup requires “one giant machine that operates three months a year, and when it breaks …,” Bersche added.

“Everyone would pay for it,” Baker interjected.

With the water slides out, aldermen approved applying for the county parks grant for $100,000 for three park bathrooms, a project also in the five-year capital plan.

The bathrooms would be constructed at Minnie Ha-Ha Park, Kitun Park and Nancy Eschbach Park.

Former Ward 1 Alderman Frank Hardy asked aldermen to consider the return on investment, or ROI, of the water slides as they voted. Questioned by Hardy, Brown noted that the slides would last 20 to 30 years and cost an extra $7,000 for workers each year. The city would break even on those expenses the first year.

But Hardy contended that the overall cost of the slides would take longer to pay off.

“Where do you break even? How long does it take?” he asked.

After the bathroom vote, Bersche joked, “Gerald, is there an ROI on these bathrooms? Could we charge for them?”