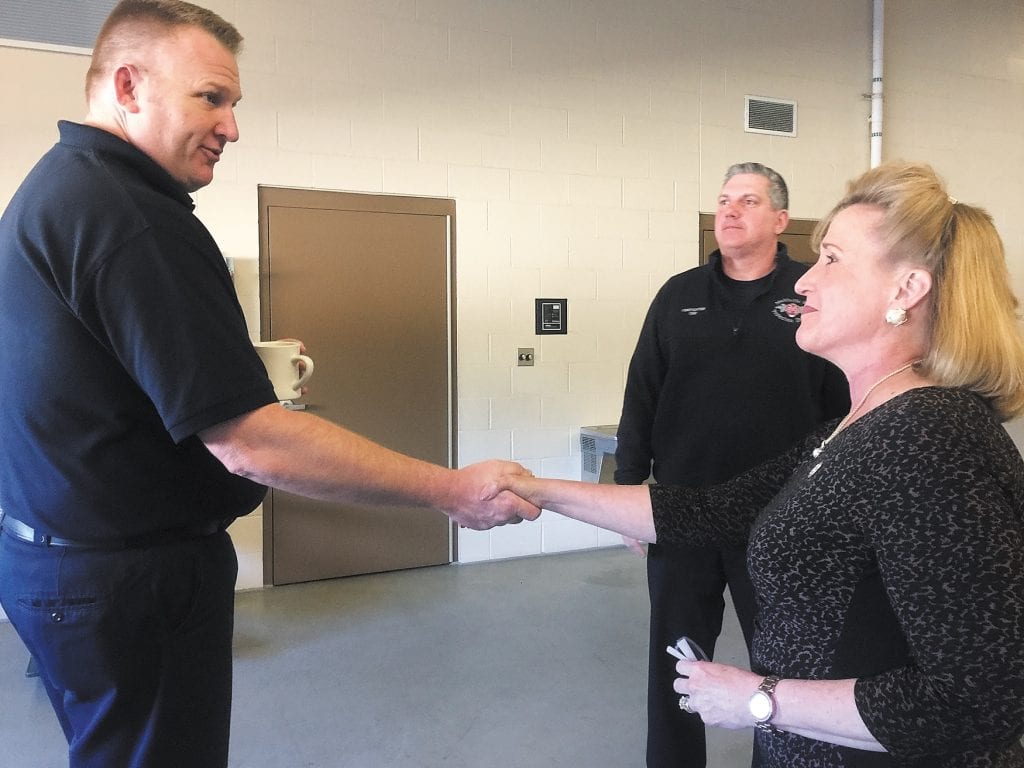 Wagner hand-delivered an application to Board of Directors Treasurer Bonnie Stegman, board Secretary Ed Ryan and Assistant Chief Dan LaFata Feb. 12 and asked them to apply for rescue grants.

She also took the opportunity to tour the latest and greatest in the fire district’s facilities, Engine House No. 3 at 4811 S. Lindbergh Blvd., which Stegman, Ryan and board Chairman Aaron Hilmer built while decreasing the district’s tax rate.

“This is the crown jewel of the district,” LaFata told Wagner. “We have some beautiful pieces of equipment to show you.”

But while Wagner was looking around the engine house and meeting the firefighters, she also mentioned that she’d heard how the district has improved services while keeping the tax rate down.

“From a financial standpoint, what you’ve been able to do is wonderful and kind of impressive,” she said. “Good stuff.”

Ryan, an engineer, examined all the building plans extensively before construction, Stegman noted.

“He really knows what we need as far as electrical and plumbing and engineering, so he’s great,” she said.

While touring the firehouse, Stegman and Ryan told Wagner about two of the district’s recent initiatives that might qualify for federal safety funding. The district is building a new training center on Baumgartner Road in Oakville.

The district is also purchasing a new customized rescue boat to replace the inflatable Zodiacs it has been using for water rescues on the Meramec River.

Applications for the federal grants opened Feb. 12 and close this month. The district does plan to submit an application, LaFata told the Call a few days after Wagner’s visit.

“We’re willing certainly as a member of Congress to backstop that and send letters of support for whatever you guys may need,” Wagner said. “Let us know how we can pile on and push those along. It’s a short period of time where it’s open, it’s 34 million bucks and it’s just been allocated if you’ve got some specific needs requests.”

Stegman, who is an assistant professor of nursing at Maryville University, thanked Wagner for legislation passed by Congress days earlier that repealed caps on Medicare payments used by the fire district. The existing caps had hit the fire district financially, Stegman said.

Ambulances have been categorized that way since the 1970s.