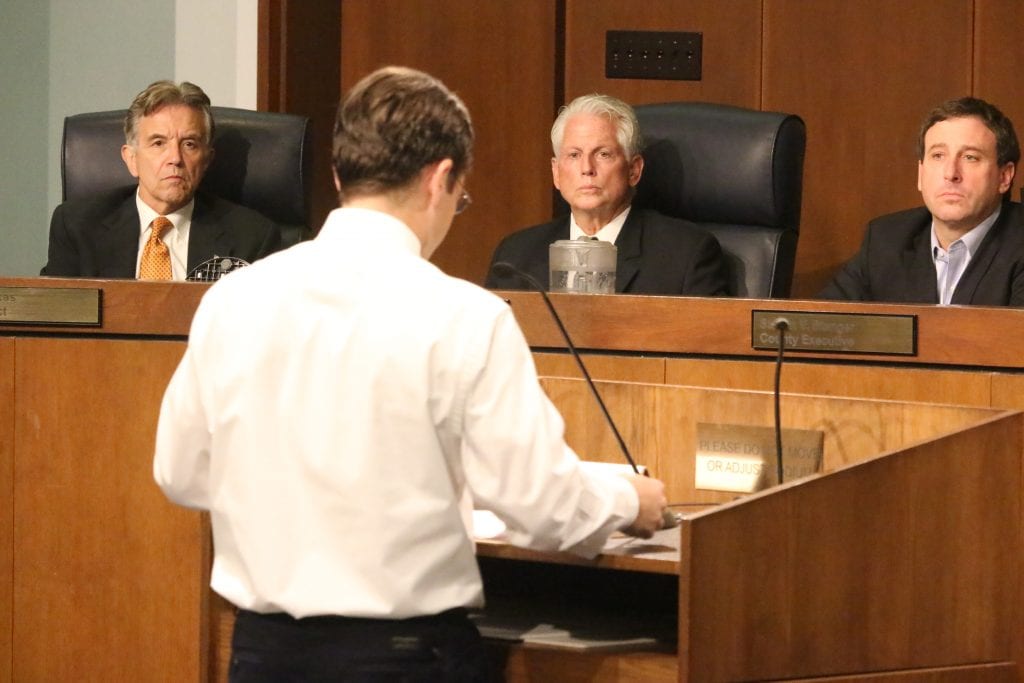 St. Louis County voters will consider two proposed amendments to the county Charter, the Constitution-like compact that the county operates under, in the election Tuesday, Aug. 7.

Residents were originally set to consider three changes to the Charter, but in response to a lawsuit from a Kirkwood man, a judge yanked a campaign-finance measure that would have created campaign-contribution limits at the county level and requires any budget transfer to be approved by the County Council. That amendment, Proposition 4, will still appear on the ballot, but votes for it will not be counted.

The other amendments that voters will consider are Propositions 2 and 3. The County Council overrode County Executive Steve Stenger’s vetoes in May to place them on the ballot 6-1, with only 5th District Councilman Pat Dolan, D-Richmond Heights, opposed.

Proposition 2 would allow the council to pay for its own lawyer instead of relying on the county counselor. Proposition 3 would change the definition of “employment” in the Charter so that council members could work as independent contractors for other governmental bodies.

But Stenger has argued that the cost of private attorneys will be too much for county taxpayers and that if the definition of employment is changed for council members, it could lead to the types of conflicts of interest that the original writers of the Charter wanted to prevent when they wrote that clause in the first place.

Proposition 2 — Should the County Council have its own attorney?

County Council members are proposing Proposition 2, an amendment that would allow them to hire their own attorney if they believe the county counselor isn’t representing them properly — which is the current status of their relationship with County Counselor Peter Krane, who was appointed by Stenger and approved by the council when Stenger took office in January 2015.

The Charter mandates that the county counselor serves as the county’s only attorney, but the majority of the council now argues that since Krane is appointed by Stenger, he cannot offer the council impartial advice in case of a conflict with the executive branch.

Under the amendment, the council could hire a staff attorney of their own to counter other legal advice from current county lawyers. That would fix what Trakas calls a “fatal flaw” in the Charter that created a basic conflict of interest between the executive and legislative branches.

“I’ve come to the conclusion finally that there’s not one piece of advice we can rely on from the counselor,” Trakas said.

There is no spending cap on the bill or any limit on the salary of the new staff attorney.

“They want to spend unlimited amounts of money on an attorney,” Stenger said. “It’s just a complete waste of taxpayer money. I have never seen a member of St. Louis County government ask taxpayers to pay their lawyer bills for manufactured cases that they’re putting together. It is the — I’ll just say it in common parlance — it’s the craziest thing I’ve ever seen. I’ve never seen anything like it.”

As an example of why Page believes the amendment is necessary, he points to the June 26 court hearing in the lawsuit to keep the Charter amendments off the ballot. Jordan Grommet, 22, sued the St. Louis County Board of Election Commissioners to pull the Charter amendments, but four County Council members intervened as individuals.

Krane went to court ready to represent the council, but the council brought its own private attorney, Elkin Kistner of the council’s preferred law firm Bick & Kistner.

“The need for these Charter amendments became obvious when we were in court and our county attorney appeared as summoned by the court to defend the council’s position and instead, to my disappointment, argued against the County Council position,” Page said.

But the potential price tag of private attorneys is too risky, Dolan said.

“I don’t believe the taxpayers should be burdened with paying for outside counsel,” he said.

In the veto letters Stenger sent to Page rejecting every one of the council’s Charter amendments, he argued the Charter change comes without “any limitation in scope or funding and without any benefit to county residents… In addition, this effort would eviscerate the core concept of the American system of three branches of government with a separation of power delineating among those branches various core functions and providing checks and balances. Under the proposal, the council, the legislative branch, would gift itself with the executive function of entering into contracts in the name of St. Louis County.”

The ballot language also does not mention that the county already employs a full-time attorney who represents the council, Stenger noted, referring to the county counselor.

Proposition 3 — Change the definition of employment

To prevent conflicts of interest, the county Charter currently bans county elected officials from holding any other public office or employment with any other government entity.

But Stenger argues that the current clause keeps council members from holding outside public positions that could open up potential conflicts of interest for county elected officials, who could “serve two masters.”

The change is aimed at Trakas, who is in a court battle fighting to keep his office after a special prosecutor recommended that he be removed from office because his contract legal work for public school districts violated the current Charter prohibition against council members working for other government entities.

Trakas has argued that since his work as an attorney for the three school districts was in the role of independent contractor, it shouldn’t count as employment. But the special prosecutor, St. Charles County Prosecuting Attorney Tim Lohmar, said that case law is clear that even contract work counts as employment. A St. Charles judge will soon decide the case.

The change would not immediately impact Trakas’ situation, since it would not be retroactive. But it could impact him in the future: If he was ousted from office and ran again in a special election, he would be able to conduct legal work for school districts during that new council term.

Stenger said in his veto letter that the definition change would “upend the county Charter by allowing council members to work for outside governmental entities” and “cover for the alleged misdeeds of one of its own members.”

The amendment “constitutes a brazen attempt to excuse the alleged disqualifying actions of one of their own members. Worse still, this action sets the stage for future violations of the public trust. The county’s Charter, like that of good governmental entities across the nation, was carefully and conscientiously crafted in regard to this issue so that elected officials would not be positioned to serve two public masters, with all the ethical dilemmas such situations are bound to entail,” Stenger said.

Page said the amendment would fix a problem that “if not corrected, would make it very difficult for someone who’s an attorney to run for office in St. Louis County.”

Stenger, also an attorney, said that’s not that difficult to do, and he did it for six years in the same position Trakas serves in, 6th District councilman. Before he took office in 2009, he quit his position as prosecuting attorney for Cottleville due to the Charter prohibition against holding other public employment. City attorneys and municipal prosecuting attorneys typically work as independent contractors.