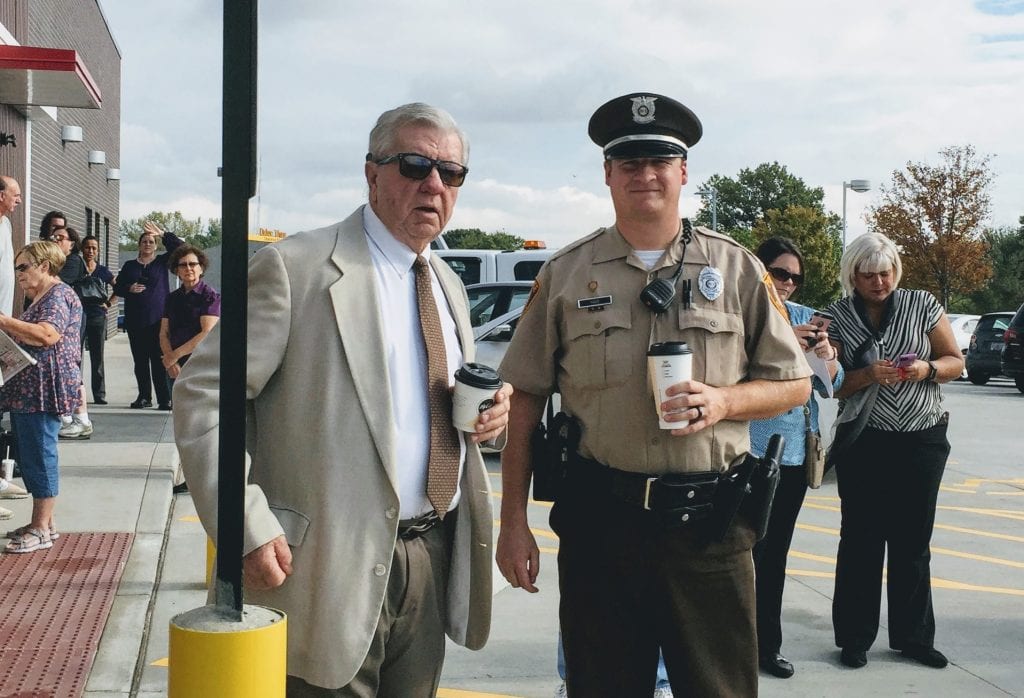 An ordinance seeking to amend Green Park’s contract with the St. Louis County Police Department to add a second neighborhood policing officer died after failing to receive a second on final passage at the Oct. 16 Board of Aldermen meeting.
The board will again consider the ordinance when it meets Monday, Nov. 20.
Aldermen have been discussing at recent meetings how to spend the estimated $131,000 the city will receive as its share of Proposition P, the countywide half-cent sales-tax for police and public safety voters approved in April.
The board voted 5-0 to approve the first and second readings of the ordinance to add the second officer at an annual cost of $91,611.68. But Ward 2 Alderman Tim Thuston’s motion to consider final passage of the measure did not receive a second.
Ward 1 Alderman Michael Broughton sought to amend the ordinance to have the second officer hired on June 1 instead of immediately and to make the hiring contingent on the city’s receipt of the Prop P funding. If the funding is not received, the amendment would be null and void, according to Broughton’s proposed amendment.
He later withdraw the amendment after it became apparent it would not receive a second.
Of the Prop P funding, Capt. Melissa Webb, commander of the Police Department’s Affton Southwest Precinct, told aldermen, “… That funding source is not going to be disseminated to any of us officers until after the first of the year …”
City Administrator/City Clerk James Mello said, “It’s just a matter of when we’ll start receiving it.”
Broughton said, “We need to do some due diligence here. We’re discussing spending almost $100,000 here on another police officer, and I think we should be doing some due diligence …”
Thuston asked, “What kind of due diligence?”
Broughton said, “Well, we don’t have an escape clause from this contract. If there’s a lawsuit over this, and there very well could be. We don’t know. They don’t know. This money could be tied up for years.”
But Thuston said he believes a second police officer is needed regardless of whether the city receives the Prop P funds.
“Well, has that been determined?” Broughton asked.
Thuston said, “Yes. We discussed it last meeting, and the meeting before that and the meeting before that.”
Broughton noted that he previously suggested that the city may need two additional officers.
“… We need to have some further discussion and some further investigation on what the police officers do and the crime statistics and the crime around here,” he said. “I would suggest that if this comes to fruition that we entertain going to the University of Missouri-St. Louis, to the Criminal Justice Program, and ask them to do a survey …”
Thuston said, “For what? We hear complaints all the time from larcenies out of cars, for speeding, for traffic violations. I think we need another officer — not two officers. Let’s get one officer. If we need another one, we can add an additional (one) another time. But to have another meeting, to have due diligence and another — what the hell do we want to study?”
“Well, we haven’t studied anything yet. That’s the point,” Broughton replied.
Thuston later reiterated that Broughton’s proposed amendment was unnecessary.
“Whether we get the money or not, we need to add an additional officer,” Thuston said.
Ward 1 Alderman Carol Hamilton said, “I believe that’s true.”
Mayor Bob Reinagel voiced his support for hiring a second police officer.
After approval of the first and second readings of the ordinance, Thuston’s motion for final passage did not receive a second.
Broughton said, “We don’t have a second, so the bill’s dead.”
Thuston said, “That’s ridiculous.”
He later asked to have the board consider the measure at its next meeting.
“I’ve just been directed to do so,” Mello said.