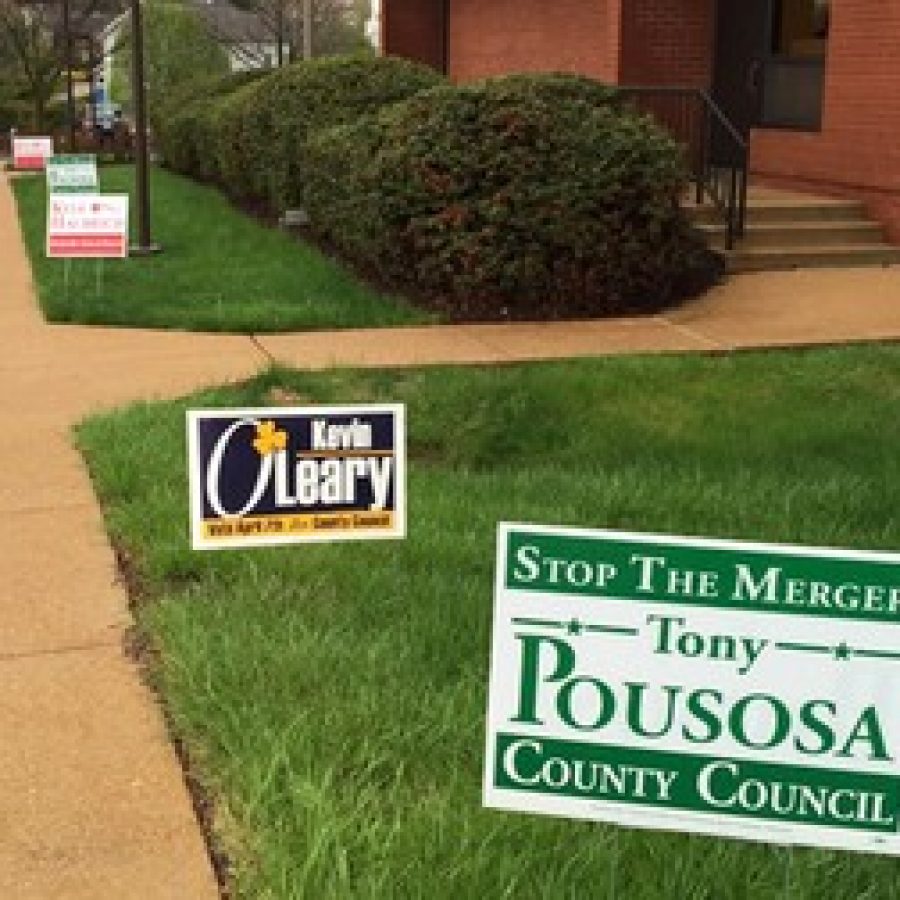 Democrat Kevin O’Leary is the apparent victor over Republican Tony Pousosa and Constitution Party candidate Cynthia Redburn in the race for the 6th District County Council seat, according to unofficial results released by the county Board of Election Commissioners.

In O’Leary’s victory speech at Genesis Banquet Center Tuesday night, the Oakville resident thanked all the supporters who “came out of the woodwork” to help him defeat Green Park Ward 1 Alderman Tony Pousosa, 54 percent to 42 percent.

Introduced as the 6th District victor by the previous holder of the seat, County Executive Steve Stenger, a visibly emotional O’Leary, 63, struggled to sum up his thoughts on being newly elected to the County Council. He could be sworn into office as soon as April 21, when the results will be officially certified. The seat is vacant after Stenger resigned Dec. 31 to take office as county executive the next day.

“We did it, we did it as a team — and I ‘m looking so forward to getting started on this and trying to make a better community,” O’Leary said, concluding his speech, “This is kind of cool.”

“I want to thank Steve for all his support — I was hanging out there lost, so he kind of guided me on the path,” O’Leary said, also thanking county Prosecuting Attorney Robert McCulloch and Rep. Bob Burns, D-south county, for their guidance.

A newcomer to politics after selling the namesake bar O’Leary’s that he co-owned in Sunset Hills with his childhood friend, actor John Goodman, O’Leary said despite months of campaigning and support from Stenger, McCulloch and other key county Democrats, he had a hard time believing that he actually pulled off the 6th District victory.

“How can I be up here?” O’Leary asked the room packed with supporters, including most of the other Democratic Council members, Council Chairman Pat Dolan, D-Richmond Heights, and 2nd District Councilman Sam Page, D-Creve Coeur.

“We’re trying to figure that out, too,” a man called from the audience, and O’Leary replied, “I’m sure a lot of people are.”

Trueblood previously served as an alderman from 1993 to 2006, when he was unable to seek re-election because of term limits.

A former candidate and a former alderman vied for the Crestwood Ward 4 Board of Aldermen seat in Tuesday’s election.

Timothy Anderson is the apparent victor. He ran unsuccessfully for a Ward 4 seat in 2013, and Deborah Beezley, who served as an alderman from 2009 to 2012, sought the Ward 4 seat currently held by Mike Vincent.

Sunset Hills Ward 1 Alderman Dee Baebler is the apparent winner, fending off a challenge from a resident who previously sought office.

Two political newcomers vied for the Sunset Hills Ward 3 aldermanic seat held by Jan Hoffmann, who is stepping down after serving 24 years.

Incumbent Pat Fribis is the apparent victor after two candidates challenged her for the Sunset Hills Ward 4 aldermanic seat in Tuesday’s election.

Sal Frisella and Thomas Hammelman sought to unseat Fribis, who has served on the Board of Aldermen since 2008.

Frisella did not respond to a Call questionnaire.

Four candidates, including two incumbents, sought two seats on the Lindbergh Board of Education in Tuesday’s election. Incumbents Kate Holloway and board Secretary Karen Schuster are the apparent victors.

Besides Holloway and Schuster, Andrea Gannon and Daniel Sampson vied for the two seats, which carry three-year terms.

Lisa Dorsey and Jamey Murphy are the apparent winners of two seats up for election Tuesday on the Mehlville Board of Education, defeating incumbent board President Ron Fedorchak and Kyle Haubrich.