UPDATED: Crestwood board to consider resolution in support of city’s Police Department

Board of Aldermen to meet next Tuesday 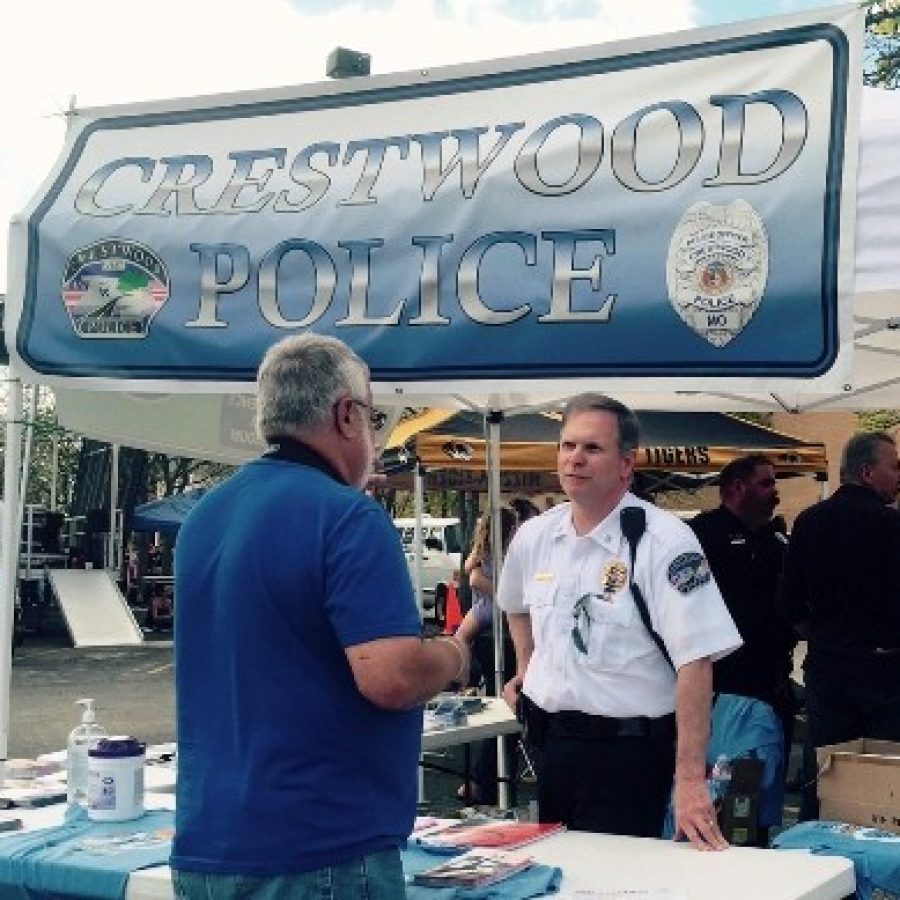 Crestwood Deputy Chief Ron Compton talks with a resident during the 'Food Truck Party at the Plaza' event Saturday.

A resolution in support of the Crestwood Police Department is scheduled to be considered by the Board of Aldermen when it meets next week.

The Board of Aldermen is set to meet at 7 p.m. Tuesday, April 26, at the Government Center, 1 Detjen Drive.

Consideration of the resolution will come two weeks after St. Louis County Police Chief Jon Belmar oversaw a presentation and question-and-answer period about the possibility of his department providing police service to the city. Residents — and many members of the city’s Police Department — packed the aldermanic chambers on April 12 to hear Belmar’s presentation.

The resolution states, “ The people of Crestwood have expressed their satisfaction with the outstanding police service provided by the Crestwood Police Department and value the ability to develop relationships with the officers patrolling the city, and to voice their concerns to local officials regarding enforcement priorities  The Board of Aldermen has explored alternative means of providing police service to the city, and has determined that the Crestwood Police Department is perceived by its residents as being the best equipped to protect and serve the city.”

As previously reported by the Call, Belmar met with the Board of Aldermen during a Jan. 25 closed session.

In February, Ward 3 Alderman Grant Mabie requested that the presentation on a potential municipal contract be scheduled.

“… At the first meeting in April if we could put on the agenda to have a presentation and public question-and-answer with the St. Louis County Police Department on potential municipal contracting with the city of Crestwood …,” Mabie said at the Feb. 9 board meeting.

St. Louis County Police Chief Jon Belmar’s presentation to the Crestwood Board of Aldermen last week is the beginning of a conversation with residents about how to stabilize the city’s finances, while continuing to provide the high level of services they have come to expect, according to City Administrator Kris Simpson.

With many members of the city’s Police Department present April 12, Belmar oversaw a presentation and question-and-answer period about the possibility of his department providing police service to the city. Residents packed the aldermanic chambers to hear Belmar’s presentation.

“I really appreciate that they came out,” Simpson said of the county police representatives who attended the meeting. “Obviously, they’re a quality organization, and I think they represented themselves very well. I suppose anyone that’s a resident of the city of Crestwood, they know the situation that the city’s in financially.

“It’s our duty to do our due diligence in exploring all options available to get the city to a financially sustainable position. The board doesn’t have a position on the police situation, at this time. But this is the beginning of a conversation we need to have with the community about what we can do to get ourselves to a financially sustainable situation, while still maintaining the high level of service that we have offered to residents.”

Belmar said, “… We met with the board on the 25th of January, and they came to me and they said that because of some fiscal issues in the city of Crestwood that they wanted to talk to us. My mandate at the time was to have a quorum and actually be able to explain to the board exactly what kind of offerings the St. Louis County Police Department could provide.

“But I also said at the time that I felt that it was important that we have this meeting that we’re having tonight because if they were actually serious in contemplating this, I think that the citizens of Crestwood need to understand exactly what this would look like.”

The county Police Department has $22 million worth of municipal contracts for a variety of police services, Belmar said.

If Crestwood contracted with the county for police service, the city could realize a savings of over $1 million. The cost to Crestwood would be roughly $1.7 million for two officers on patrol 24 hours a day.

An additional officer would cost another $500,000, while increases to the contract would be capped at 5 percent annually.

Crestwood Police Chief Frank Arnoldy said the city’s current police budget totals about $2.8 million, and the city normally has four officers on patrol 24 hours a day, with no less than three.

If the city elected to contract with the county, a captain would be housed at the Affton Southwest Precinct, but all other employees would work out of the existing offices at City Hall, Belmar said.

Noting the city’s Police Department has 26 employees, he said, “I would be looking to hire conditionally every one of those employees, whether they are police officers or whether they are dispatchers. There is a caveat to that. They would ultimately, after a conditional hire, have to go through a background investigation that would include a polygraph because that’s what all our police officers go through. Now the professional staff that you have wouldn’t have to do that.”

But Crestwood officers hired by the county would not serve in Crestwood, at least during their one-year probationary period, Belmar said.

Simpson told the Call the discussion with residents on this issue is just beginning.

“… We’re trying to have a conversation with the residents. We’ve got the survey that was on the (city’s) website and we received almost 300 responses so far,” he said, noting that the many residents who attended last week’s meeting made it clear they are opposed to contracting with the county for police service. “Only a few people spoke, but there were a lot of folks there who I think had strong opinions on the matter.

“This is something we need to hear from the residents on. We want to know what we need to do, and if they’re willing to make trade-offs in terms of service level, then we don’t need to pursue any sort of revenue increases. But if they want to keep everything we’ve got — I mean, we can’t keep doing what we’re doing. The numbers just don’t make sense.”

Police Board Chairman Rich Bland, a former Ward 1 alderman, has expressed concerns that the Police Department is being unfairly targeted, but Simpson said that’s not the case.

“Police is the largest area of expense in the city, and if you’re looking at areas to make reductions, you want to start with the biggest ones because that’s where you could potentially do the most good. Obviously, we’re limited in other areas. I would love to say, ‘Yeah, we could just do away with all the stuff we do for parks,’ but the revenues we get for parks are specifically segmented for that purpose …,” he said, adding, “… This isn’t unfairly targeting police. Everything’s on the table and we’re doing everything we can.”

The Board of Aldermen recently approved roughly $25 million in tax incentives for Chicago-based UrbanStreet Group’s $104.3 million mixed-use redevelopment of the former Crestwood Plaza.

But when completed, the revenue generated will essentially get the city back to a break-even point, Simpson said.

Assuming that the redeveloped mall would generate roughly $400,000 in new revenue for the city, he said, “We’re at just a break-even point, and really, if you’re talking about providing high levels of service to the residents — we’re a service organization. Our largest expense category is people, and if you want to keep good people and if you want to take your people and make them better, you’ve got to invest in them. Which means, unfortunately, salary increases from time to time — nothing major, 2, 3 percent — something to keep up with the cost of living and offer them enough of an incentive to stay …

“Even though it might be a break-even situation, assuming that the revenues come in at that level and obviously we’re hoping they will exceed the level they were projected at — I just don’t think from a city finances’ point of view that where we are today, breaking even with that, is sufficient to offer the residents what they’ve come to expect.”