Police chief tells Mabie, 'It's now time to put this to rest' 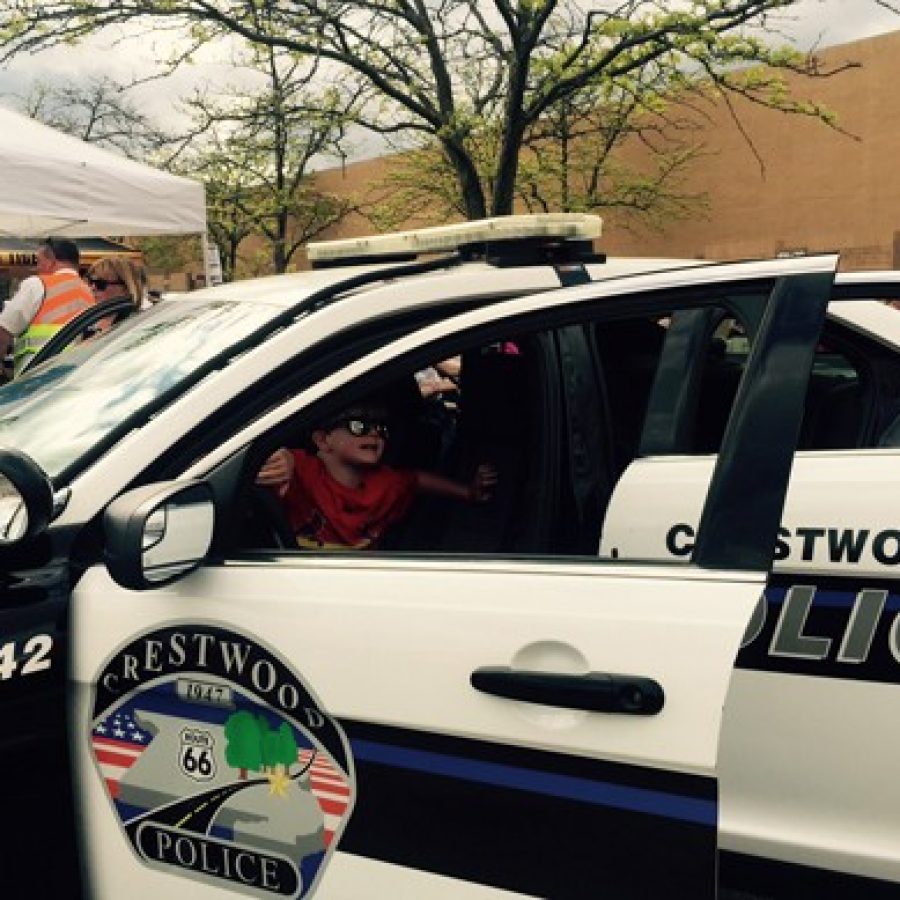 A young Crestwood resident tries out one of the city's police cars on display at the April 16 'Food Truck Party at the Plaza' celebration.

The Crestwood Board of Aldermen voted 7-0 Tuesday night to adopt a resolution in support of the city’s Police Department.

Consideration of the resolution came two weeks after St. Louis County Police Chief Jon Belmar oversaw a presentation and question-and-answer period about the possibility of his department providing police service to the city. Residents — and many members of the city’s Police Department — packed the aldermanic chambers on April 12 to hear Belmar’s presentation.

The resolution states, “… The people of Crestwood have expressed their satisfaction with the outstanding police service provided by the Crestwood Police Department and value the ability to develop relationships with the officers patrolling the city, and to voice their concerns to local officials regarding enforcement priorities … The Board of Aldermen has explored alternative means of providing police service to the city, and has determined that the Crestwood Police Department is perceived by its residents as being the best equipped to protect and serve the city.”

After a public backlash against Mayor Gregg Roby and other city officials for exploring outsourcing the Crestwood Police Department to the county to save money, the city’s Board of Aldermen had a chance earlier this week to halt the idea for now.

Aldermen were set to consider a resolution in support of Crestwood police officers and against outsourcing police services to the St. Louis County Police Department when they met Tuesday — after the Call went to press.

The addition of the resolution to Tuesday’s agenda came just days after Crestwood Police Chief Frank Arnoldy challenged the alderman who suggested investigating outsourcing, Ward 3 Alderman Grant Mabie, at the April 18 meeting of the city’s Police Board. As Mabie came up to the chief to ask a question, Arnoldy — who has worked in Crestwood for 43 years and would lose his job if the city switched to county police — told the alderman that the city’s police officers were in fear of their jobs and want reassurance that the city isn’t going to shut down the department.

“Grant, it’s time, my friend — it’s time to make this go away,” Arnoldy told Mabie. “You’ve done your due diligence, you have done it. It’s now time to put this to rest … You’ve got 30-some people on pins and needles. Do what you can.”

Arnoldy and the alderman had a good conversation in the chief’s office for more than an hour on the “police proposal, logistics, morale and everything else,” Mabie told the Call, adding that he did not know who requested that the resolution be placed on the agenda.

The resolution notes that Crestwood residents “value the ability to develop relationships with the officers patrolling the city, and to voice their concerns to local officials regarding law enforcement priorities.”

The resolution ends by stating that the board wants city police to “protect and serve the city for years to come.”

During budget talks last year, aldermen winnowed a projected $1.2 million budget deficit down to $700,000. If no changes are made to city finances, Crestwood will eventually be forced to outsource police services anyway because it won’t have the money to fund them, Mabie wrote in response to a Facebook post from a Crestwood officer upset at the idea of working for the county.

But since Belmar’s presentation, Roby and aldermen have received a mandate from residents that outsourcing police should only be investigated as a last resort, Mabie noted.

“Based on the feedback we’ve gotten from the public, there is not a lot of interest in pursuing that, and there are certain people who are downright hostile to it,” he said.

At last week’s Police Board meeting, Ward 2 Alderman Justin Charboneau listed his opposition to the idea due to the one-year probationary period, loss of seniority and potential loss of retirement accounts that Crestwood officers hired by the county would face.

Working off numbers given to him by the city, Belmar presented a plan for staffing officers for two beats, which would save the city $1.1 million compared to the $2.8 million currently budgeted for police. But Arnoldy noted at the police board that the city has experimented with different numbers of round-the-clock beats and has found a sweet spot with three beats since 1997.

Adding $500,000 to a potential county contract to staff the three more shifts required for a third 24-hour police shift would make the savings closer to $600,000, Charboneau said.

Arnoldy outlined responses from the survey the city posted to gauge residents’ happiness with their police services, noting that 70 percent want to keep the police force they have now.

Out of 300 responses, 86 percent of which were from residents, 152 respondents gave Crestwood police the highest ranking, and only eight gave police the lowest, the chief said. Seven out of 10 respondents said they were willing to pay more money to fund city police.