UPDATED: Belmar reprimanded by police board 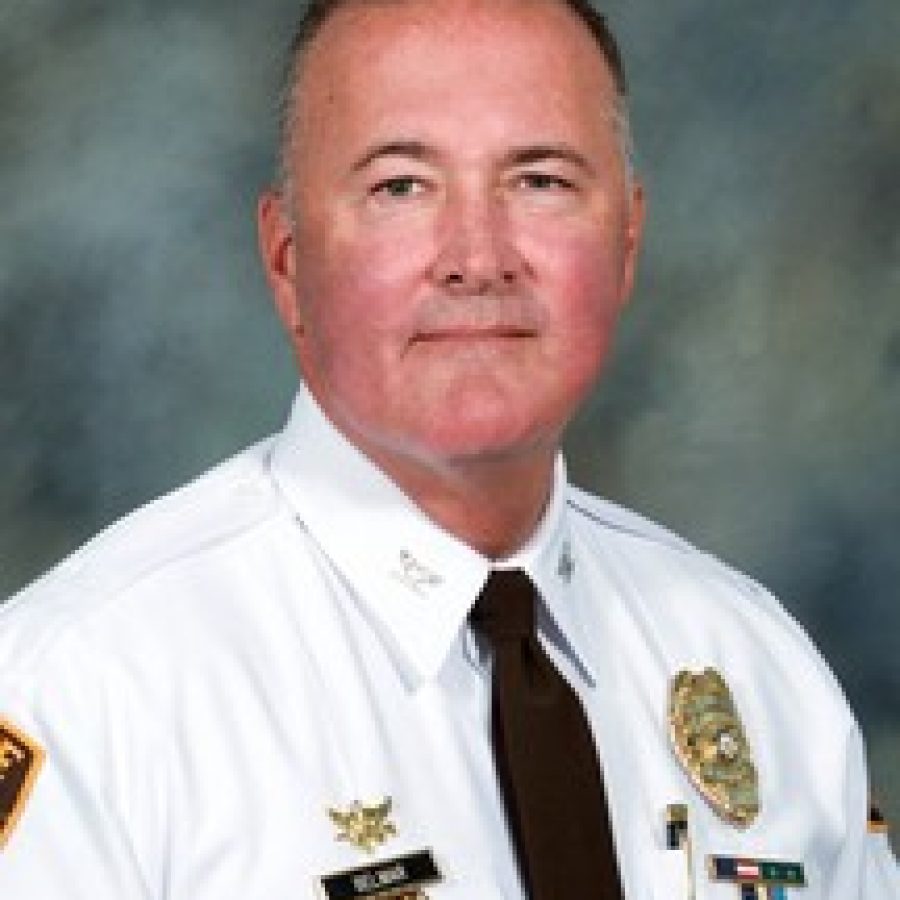 The county Board of Police Commissioners last week reprimanded Chief Jon Belmar for writing a letter to a federal judge in support of a convicted member of a drug trafficking ring, a month after County Executive Steve Stenger wrote a similar letter.

Belmar and Stenger wrote to U.S. District Judge Catherine Perry last fall asking for leniency in the Dec. 17 federal sentencing of Michael Saracino II, who was indicted in 2014 with a dozen other members of a drug trafficking ring that made millions of dollars over four years bringing marijuana to Missouri from California.

Belmar did not know Saracino personally but in his letter, he wrote that he had known other members of the extended family of restaurateurs for more than a decade.

“With regard to Michael’s offense, I will offer no excuse, but to say that I believe that he has the benefit of having a strong family surrounding him, who will provide the right type of support, and demand accountability from him as he moves from the tragic decision that he alone bears the responsibility for,” Belmar wrote. “… I remain confident that whatever decision you render in this matter, it is the right decision, and you enjoy my full support.”

In Stenger’s letter, however, he concentrated on his personal relationship with Saracino that began when then-Bartolino’s South waiter Saracino impressed Stenger with his “kind personality and his interaction with customers.” Defense attorney Stenger also represented Saracino in an unrelated drunk driving case in 2012.

“Based on my experience with Michael and his family, I respectfully request that you grant him leniency in your sentencing for the crimes he has committed,” Stenger wrote to Perry, noting that a remorseful Saracino branched into management at Bartolino’s with the help of his father, Michael Saracino.

Stenger’s letter used the address of the county executive’s office in Clayton but, unlike Belmar, he did not write it on official letterhead.

The police board voted unanimously in a two-hour closed session Jan. 28 to take action against Belmar by issuing him a letter of reprimand, board Chairman Roland Corvington said.

The chief still has the “full support” of the board, however, Corvington told Belmar directly after the announcement.

It is a rare official black mark on the record of Belmar, who has spent his entire 29-year career in the St. Louis County Police Department, where he has served in every division and received at least 87 awards, commendations and letters of appreciation.

Stenger and Belmar wrote the letters at the request of Saracino’s uncle John Saracino, who held one of the highest-paid positions in county government as Stenger’s director of constituent services.

He was a board member when the board chose Belmar as chief two years ago. Stenger has not yet appointed his replacement.

In a statement, Saracino said he was resigning with a “heavy heart” but is not ashamed of asking for the letters on his nephew’s behalf because they are an integral part of sentencing, and anyone would do the same for a family member.

“The merciful administration of justice is as fundamental to the rule of law as anything there is,” Saracino wrote.

Saracino II pleaded guilty last week to a state charge of money laundering at River City Casino. When he pleaded guilty in July on federal drug charges, he admitted his role in a multi-state drug conspiracy that mostly moved marijuana but also turned violent with a misdirected firebombing that destroyed an elderly widow’s house in south county in 2013.

Saracino II reported to a federal medical prison camp in Springfield Jan. 27 to begin serving the two-year sentence Perry handed down in December, less than the recommended minimum for the charge but more than the house arrest his attorney Scott Rosenblum requested.

A group led by activists Zaki Baruti and Anthony Shahid attended Tuesday night’s County Council meeting with the intent of asking Stenger about the letter. The county executive did not attend due to an illness, and Belmar was also absent.

Wearing a sign on his chest with a picture of the firebombed south county house and a sign on his back with a copy of Belmar’s letter, Shahid said activists will attend every council meeting until they can ask Stenger directly if he will intercede on behalf of all incarcerated nonviolent drug offenders in the county.

He also questioned whether members of the council knew and approved of the letters.

“Are you writing letters for El Chapo in Mexico?” he said.

Shahid noted that he agreed with the St. Louis County Police Association, which came out against the letters, and stands with south county residents upset by the firebombing, especially the woman who lost her house.

“This is a breach of public trust, and as the homeowner says, she said this is betrayal,” Shahid said. “Are you all writing letters for dope dealers now? Kidnapping, 100 (kilos) of drugs, firebombing? I’ll ask the board this question: Why are you ignoring this?”

If Dooley had written a similar letter while he was county executive, he would have been endlessly castigated, Shahid noted.

Representing the Universal African People’s Organization, Baruti said he wouldn’t criticize Stenger for writing on behalf of a drug offender, but wants Stenger to extend his efforts to others similarly incarcerated.

“I’m just here to say ‘Don’t be a hypocrite’ to Steve, and y’all pass that on for me,” Baruti told the council. “We want to start a campaign for leniency for the hundreds and thousands of nonviolent offenders here in the jails across this St. Louis County… Justice and leniency for all.”