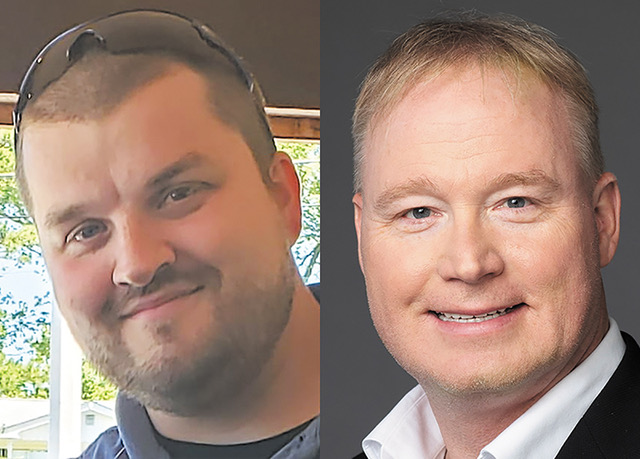 Two newcomers to public office will contend in the Republican primaries Aug. 4 for the chance to run in November for the 1st District Missouri Senate seat currently held by Sen. Scott Sifton, D-Affton, who is term-limited. The winner of the GOP primary will face Rep. Doug Beck, D-Affton, who does not have an opponent in the primary.

Mitchell Kohlberg, 35, of Affton, is a law enforcement officer who did not provide his personal information and address due to his job.

When asked why he was seeking office, he said, “To protect parental rights regarding education and medical decisions. To protect our constitutional rights.”

Lenihan, 53, 19 Kings Crossing Court, Oakville, is the CEO of Tiber Health and president of Ponce Health Sciences University, which has campuses in both Puerto Rico and St. Louis.

Lenihan is married to Karen Ahlemeyer, and they have two sons. He is a doctor in medicine and neurosurgery.

When asked why he wants to run for Senate, Lenihan said, “We need a vision we can all get behind. A vision that includes education, health care and a way to create new jobs. We need a vision that links all aspects of society to ensure everyone has a chance at success.”

The candidates gave the following response to The Call’s questionnaire:

What issue do you consider the single most important in this race and why?

Kohlberg said, “Parental rights because parents’ beliefs and decisions are being overruled by schools, hospitals and our government.”

Lenihan said, “Creating opportunities for all of us by working to establish an environment for job creation, expanding technology in education and increasing access to health care by reducing costs. This is what I have been doing for 15 years and why I am investing in St. Louis, helping to create over 450 jobs in our community.”

Kohlberg said, “Pro-life, as a society we need to protect our unborn.”

What do you think of the death penalty?

Kohlberg said, “I believe the death penalty should be used for the most heinous of acts of violence. In recent studies, the cost difference to Missouri residents to change policy is too close.”

Lenihan said, “I am opposed to the death penalty.”

Would you support voters deciding whether to repeal the supermajority requirement for school-district bond issues?

Kohlberg said, “I would support such a repeal. If a simple majority of the residents want to increase funding for education, why make it harder?”

Lenihan said, “It depends — I would not support guaranteed (constitutional) general revenue bonds because this would make all residents liable for the obligation regardless of any economic situation. I would also want two key elements. One, to restrict the total leverage a district is able to bond and two, a requirement that a portion of the funds is invested to improve technology. Given these restrictions, I would support an amendment.”

Kohlberg said, “It does need to be looked at. I believe the last time it was approved was in 2005.”

Lenihan said, “Yes — changes need to occur to ensure that resources such as technology investments occur each year and that funds are available to provide options to students where courses are not available. I have worked in universities where these investments were made and understand how to make them successful and enhance the educational experience for the teacher and student.”

Are changes needed to the state’s Sunshine Law? If so, what would you propose?

Kohlberg said, “Yes, government accountability is key. Audio recordings at a minimum should be used for closed meetings.”

Lenihan said, “In 2018 Amendment 1 established that legislative records are open to the public. I will respect the will of voters.”

Kohlberg said, “I would first see if funds could be reallocated. I am not for increasing taxes.”

How will you improve the state economy?

Kohlberg said, “I would push for stronger STEM (science, technology, engineering and math) programs and vocational studies. This will create a market for businesses to come to Missouri.”

Lenihan said, “Personally, I am investing in Missouri to create jobs, because I believe in this state. We need to promote what we excel in, such as energy, agriculture, health care and education. This will attract new businesses and promote job creation. Then we will remove the barriers that inhibit growth, allowing businesses to succeed.”

Kohlberg said, “I strongly oppose a city/county merger. I also believe it should be left to the residents of St. Louis city and St. Louis County, not the state.”

Are changes needed to teacher pensions?

Kohlberg said, “I was a member of the PEERS program for approximately five years and did not have a problem. However, my story is different from others and I would want to hear others’ concerns.”

Lenihan said, “No. A deal is a deal, and we must respect what we agreed to for the teachers. I do not support raiding any pension funds to support new pet projects.”

Read on for web-exclusive questions and answers:

Lenihan said, “We need to provide a vision of Missouri and St. Louis that entices business to be innovative, creating new jobs. This must include expanding our technology in education, investment in infrastructure and making health care affordable. Our political leaders need to represent all of us, not just in Missouri, but globally. We are not just competing against Illinois or Kansas, we are competing globally for investment, jobs and reputation.”

Kohlberg said, “I’m for city/state development as long as it’s done right and the residents of the area are placed first and approve the TIF.”

Lenihan said, “TIFs are useful to drive investment into communities where resources are needed. However, if a TIF is used to move a Walmart or Mercedes dealership three blocks down the road, then I am against. The TIF must also generate significantly more tax revenue than the amount of the project TIF.”

Are changes needed to the law allowing Missouri citizens to carry concealed weapons? If so, why? If not, why not?

Kohlberg said, “I believe in a constitutional carry, however, private businesses do have the right to now allow firearms on their property.”

Kohlberg said, “I oppose eminent domain. I believe the owner of the property should have absolute rights over the land. I’m also against personal property tax.”

Lenihan said, “Yes. We need to ensure that eminent domain is used only for projects of substantial community need. It must not be used for pet projects.”

Would you support amending the state’s Sunshine Law to require public governmental bodies to make audio recordings of all closed meetings? Such recordings would not be available to the public or press.

Kohlberg said, “I believe all meetings regarding elected officials should be recorded in some fashion. This recording should also be made available to the public.”

Lenihan said, “I do not know. I would need to read the amendment to ensure that free and fair discussion can occur. If that could occur, I would always support more transparency than less.”

What do you think of the performance of Gov. Mike Parson?

Kohlberg said, “Being governor is a difficult job. Gov. Parson had a few bumps, but overall I believe he is doing a good job as governor.”

Lenihan said, “Excellent — I support Gov. Parson’s investment in workforce development and job training. These programs ensure that all Missourians are given the tools for economic success. I also support the governor’s ability to make a decision in these difficult times. A true leader is able to make the call — Gov. Parson has done that.”