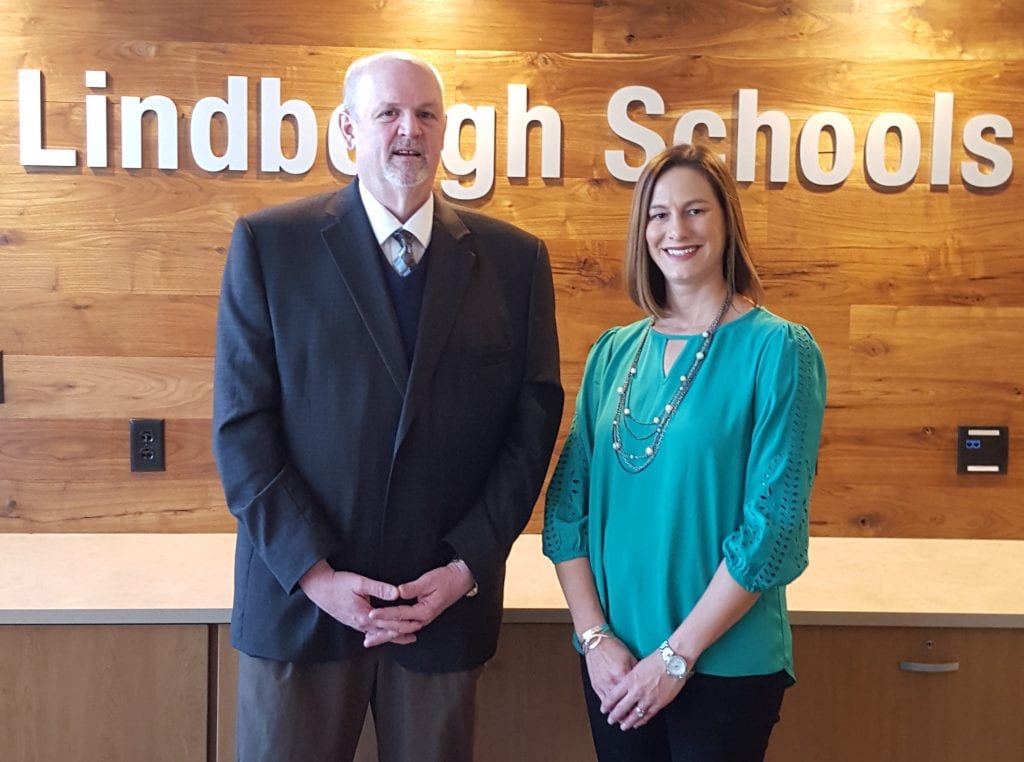 Pictured above, from left: Board Treasurer Mike Tsichlis and Board Vice President Jennifer Miller.

Two current members of the Lindbergh Board of Education say they are running again in April.

Board Vice President Jennifer Miller and Treasurer Mike Tsichlis say they will both seek election to a second term. They were both first elected in April 2016.

Fenton resident Miller, 37, is an early-intervention therapist with Missouri First Steps. She and her husband have a son in fourth grade and a daughter in second grade at Concord Elementary. She has a master’s degree in early intervention in deaf education. Tsichlis, 57, lives in Sappington and is a nonprofit-fundraising consultant who holds a doctorate in public policy administration. He and his wife have a son in his junior year at Lindbergh High School. Tsichlis previously served on the Crestwood Board of Aldermen.

“We’re thrilled to be a part of launching an exciting new chapter in the history of the Lindbergh School District,” Miller and Tsichlis stated in a joint news release. “We have and will continue to reach out to all members of our community as the district charts a future emphasizing building positive student character and embracing innovative

Miller and Tsichlis along with the entire Lindbergh board hired new district Superintendent Tony Lake in January after an extensive candidate search, following the announced retirement of former Superintendent Jim Simpson.

Miller serves as vice chair on the Special School District governing council and on the Lindbergh High School Programming Committee. She served on SSD’s yearlong Peer Review Committee and as the Lindbergh board alternate delegate to the Missouri School Boards Association, or MSBA. She continues to volunteer at her children’s school and at their extracurricular activities.

Tsichlis has served on the Lindbergh Safety and Teacher Salary committees, and currently is on the district Strategic Planning Committee. He has volunteered as Lindbergh representative to the high-school Youth in Government

program and the district Chess Club. Tsichlis has served as the district’s delegate to the MSBA as well as regional Leadership Development Committee chair.

Both Miller and Tsichlis currently serve on the Lindbergh Curriculum and Instruction and Technology committees and each has received master’s-level board member certification awards from the MSBA.