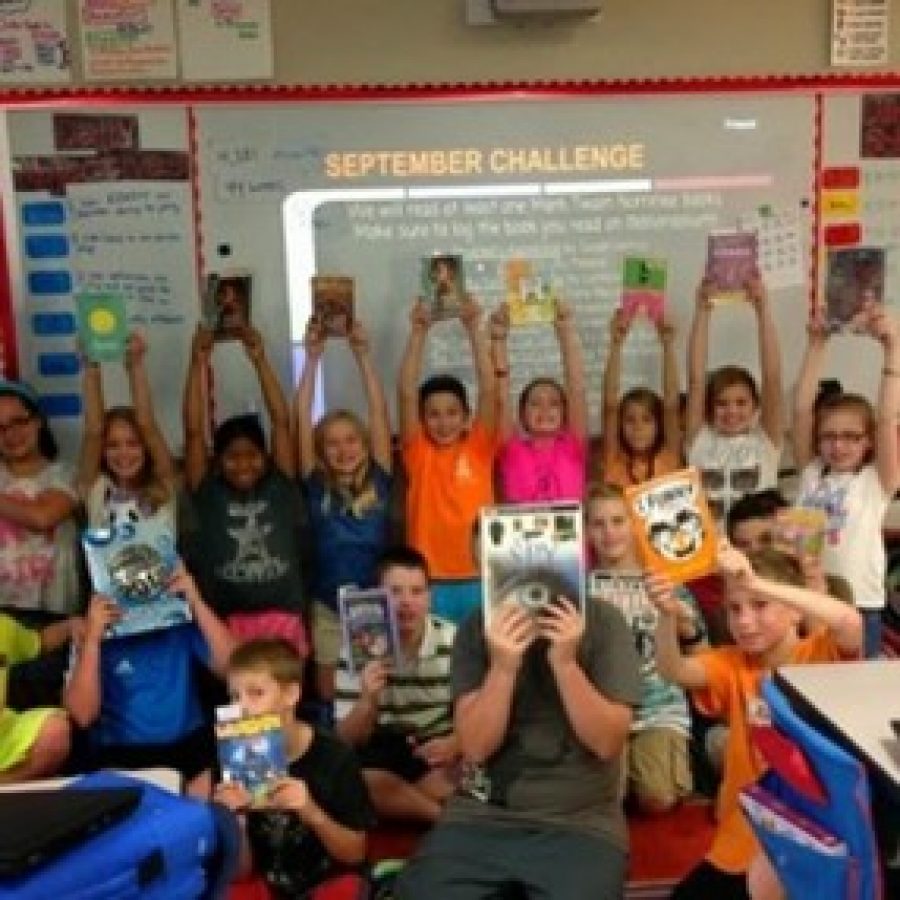 Students in Mallory Krueger's fifth-grade classroom at Sappington Elementary pose with their books, which need bookshelves, for Krueger's DonorsChoose request.

In a surprise donation, Twitter founder Jack Dorsey funded all the open DonorsChoose projects in Missouri in honor of Best School Day March 10, including projects in Lindbergh and Mehlville school districts.

Promoting the initiative with the hashtag #BestSchoolDay, Dorsey fully funded Missouri teachers’ projects on the site and encouraged others to do the same in other geographical areas. Following his lead, Bill and Melinda Gates funded projects in the Bronx and actor Ashton Kutcher funded all projects in Iowa. Throughout the day, more than 50 athletes, actors, founders and philanthropists announced surprise donations of more than $14 million to fund nearly 12,000 projects nationwide.

In a news release, Lindbergh Schools said more than 300 students at all grade levels will be impacted by Dorsey’s donation.

Only one Mehlville School District teacher had a project listed on Best School Day, but the teacher says the project will help hungry students have food to eat when they’re not at school.

Dorsey funded $993.27 for a new initiative by Erica Brown, a teacher at Margaret Buerkle Middle School, whose students came up with an idea to use food waste from cafeteria lunches to help feed other students who may not have enough food at home.

The Giving Basket project initially started with students donating their unused, unopened food and Brown storing it in her classroom refrigerator, but the demand for the extra food items soon outgrew the teacher’s mini fridge.

To kick off expansion of the Giving Basket, Brown asked on DonorsChoose for a refrigerator and 20 insulated tote bags so that students can take food home over the weekend.

In her request, Brown noted that Buerkle is a diverse and high-poverty school, with 60 percent of students qualifying for free or reduced lunches and students speaking over 15 languages at the school, which is a National School of Character.

Thanking Dorsey, Brown said that after he funded her project, Buerkle’s cafeteria staff immediately came up with a plan to keep the Giving Basket refrigerator fully stocked with food to send home with children who would otherwise go hungry.

“Being fully funded on #BestSchoolDay was just the motivation I needed to get through this part of the school year. My excitement was contagious and helped encourage students to make it their best school day,” Brown wrote. “The students in my building will be blessed by your generosity. Our cafeteria staff has created a plan to help keep our new fridge stocked so we can continue to end hunger in our school. The funding for this project will reach far beyond the classroom and halls of our school. Stay tuned for updates and photos.”

Among the projects Dorsey funded in Lindbergh Schools was a request for $180.36 from Truman Middle School library media specialist Megan Vallis for a celebration and rewards – including a bookmark and book lights – for 150 student volunteers who serve as “shelf leaders” in the Truman library. As shelf leaders, the students volunteer to come to school early once a week to organize, dust and check on their designated library shelf.

“The students take their work seriously and try to keep the library a clean and organized place,” Vallis wrote in her request.

Vallis, a Lindbergh graduate herself, wrote in a thank-you note to Dorsey after Best School Day: “I can’t fully express my joy, excitement, and thanks for your donation to my project. It is great to see that you share my vision for reaching children… The students have been working so hard being active shelf leaders in our library.”

Other local projects Dorsey funded include:

• $2,232.18 for standing desks to create alternative learning stations for Lewis Naeger’s fifth graders at Long Elementary School. In his request, Naeger noted that his very active fifth-graders cannot sit still for long periods and would learn better if they had the option of standing desks along with more traditional ones. The desks will also help students collaborate in groups for science experiments, he noted.

The news that the learning stations were fully funded just before the deadline was “unbelievable and completely unexpected,” Naeger said in a news release.

“My students and I are all extremely excited about the versatility that these desks will bring to our classroom,” Naeger said in a thank-you note. “It’s nice knowing that this job, which I find so self-rewarding, is appreciated by others.”

• $1,426.08 for five $234 Apple iPad Minis for Liz Hageman’s second-grade classroom at Sappington Elementary School to have 1:1 devices. In her request, Hageman said her school is very pro-technology, and she wants her students to become more comfortable using it for research and other classroom work. Not all of her students can afford to bring their own device to school, she noted.

“I hope to see my students take charge in their learning by research topics they are interested in rather than always topics I or our curriculum chooses,” Hageman wrote.

In Hageman’s thank-you note to DonorsChoose and Dorsey, she noted that Sappington is already the largest elementary school in Lindbergh and next year could top 800 students.

• $1,068.31 for human anatomy models for the human anatomy classes taught by Lindbergh High School teacher James Denner. In his request, Denner said many of his students hope to go into a healthcare profession, and he wanted to be able to show them lifelike models of articulating joints and the bones and muscles of the knee, shoulder and pelvis.

In a thank-you note, Denner wrote, “Students retain and understand much better when they have the opportunity to see and manipulate life-like models, as opposed to mere lecture and reading. Your donation will help many classes of future health care professionals for years to come!”

• $763.17 for bookcases for Mallory Krueger’s movie-themed fifth-grade classroom at Sappington Elementary. The students love to read, Krueger said, but their old, broken $10 bookshelves were not enough to hold their “precious” class library. Krueger included a photo of her students holding up their books.

In Krueger’s thank-you note, she wrote that as a new teacher, she couldn’t pay for the bookshelves herself, and she and her students are “SO grateful for your generous donation.”

“The kids cheered when I told them!” Krueger wrote. “We can’t wait to organize our new library and put our favorite books on display!”

In her request, Kapodistrias explained that her students try to be good friends to each other every day, but at times they each get down on themselves. She wanted to help them make Friendship Frames with thumbprints of every classmate in a tree so that the students can look at the frames when they’re feeling lonely at home.

“I’m hoping the nicely framed artwork can be seen before going to sleep at night,” she wrote. “Before laying one’s head on the pillow, this donation will serve as a reminder of the love and support from classmates and friends.”

In her thank-you note, Kapodistrias said she had not yet told her students about the donation because she wants to surprise them with the art materials.

“I have, however, told all the teachers from my school about it! We’ve been jumping for joy!” she wrote.