Truman educator finalist for Missouri Teacher of the Year 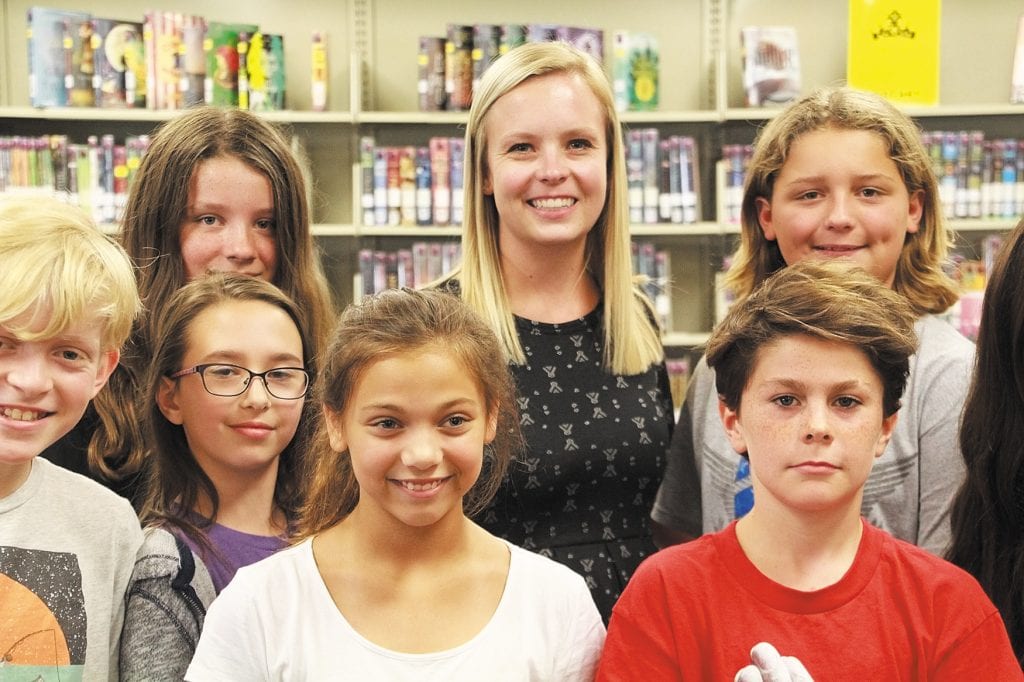 Truman Middle School library media specialist Megan Vallis is one of six finalists for the 2017-2018 Missouri Teacher of the Year Award.
School districts throughout the state submitted nominations for the award, and the finalists were chosen by a selection committee appointed by the Department of Elementary and Secondary Education.
The finalists were selected from among 32 regional teachers of the year.
Vallis began her career teaching second grade at Crestwood Elementary School for seven years and is now entering her third year at Truman. She is an innovative educator who has transformed the library into a learning space that utilizes cutting-edge technology and provides a welcome, inclusive gathering space for students in a variety of grades, reading levels and interest groups, according to a news release.
“Believe it or not, I did not like to read when I was in middle or high school. It wasn’t cool,” Vallis stated in the release. “I wanted to change that for Truman, and that was my mission. When I became library media specialist in 2015, my goal was to make the library — a stereotypical, quiet, boring, stale place — into a fun, energetic, sometimes loud space that students would want to come to, not have to come to.”
Vallis has achieved her goal, the release stated. Library checkouts have increased by more than 4,000 books a year, and the number of students who read for pleasure has increased dramatically.
In addition, Vallis constantly looks for ways to share technology and professional development with her fellow teachers.
Whether she is stepping in to teach an English class, developing reading curriculum for Flyer Time classes, or providing guidance for teachers about how to grade research assignments, Vallis’ colleagues appreciate her knowledge of good instruction and enthusiasm to share resources so that all students can succeed.
“The Truman library serves as the core for literacy and learning, and Mrs. Vallis has continued to have a positive impact on the entire school community,” Principal Mike Straatmann stated in the release. “She is such a great resource for students as well as teachers, and has developed the library into a positive, fun and enjoyable place to learn. She has an amazing ability to develop meaningful relationships with all members of the school community.
“I am honored to be able to work with Megan on a daily basis in her role as library media specialist. We are extremely pleased with Megan’s leadership and her positive impact on our school, and we are proud to have her represent Truman as a Missouri Teacher of the Year finalist.”
This summer, Vallis launched Camp Innovate, a STEM — Science, Technology, Engineering and Mathematics — camp for middle school students featuring LEGO Robotics, Minecraft, Sphero, Breakout boxes and app creation.
Throughout the school year, Vallis invites students to stop by the library before school each month and check out apps like Geometry Dash, Color Switch and Doughnut Day, during “Appy Hour,” a program she created to engage students in technology and bring them together in a fun environment. She has created clubs for struggling readers, finding interesting books and magazines for students who might not otherwise have an interest in reading.
Vallis earned her bachelor of science degree in education from Missouri State University in Springfield in 2007. She went on to earn her master of art degree in education in library media in 2011 from Lindenwood University.
She is the district’s fifth Missouri Teacher of the Year finalist since 2011.
Others include Katie Johnson, Lindbergh High School (2016); Melissa Nussbaum, Truman Middle School and Kim Dailey, LHS Special School District (both in 2015); and Eric Cochran, LHS (2011).