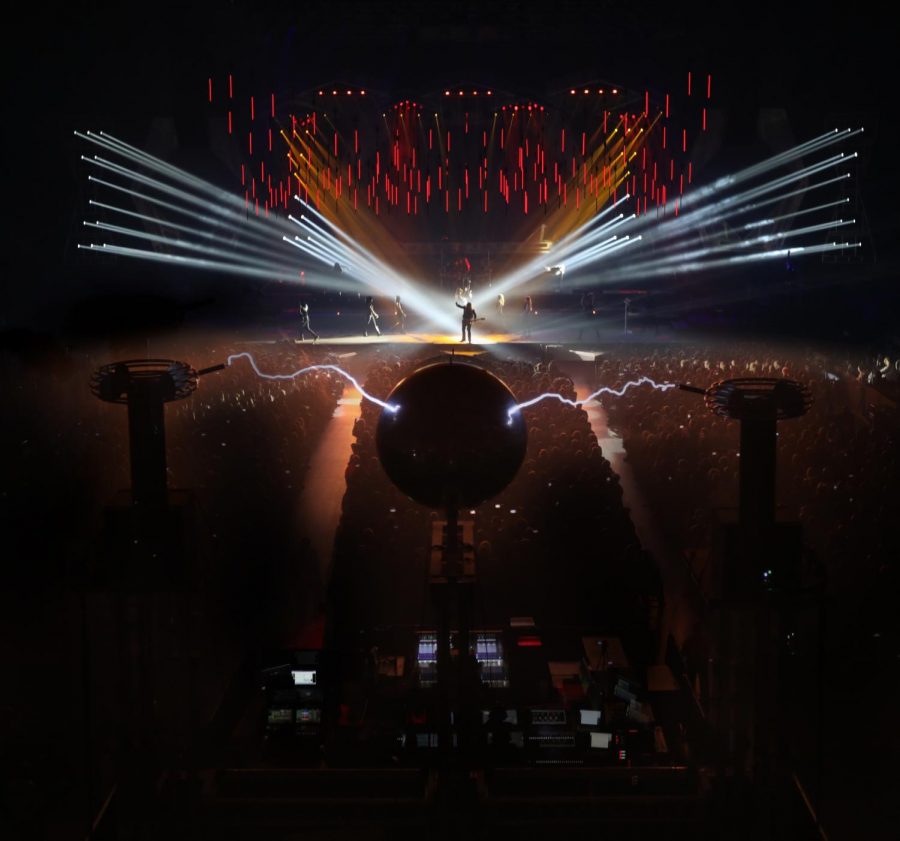 By Alan Sculley, For the Call

To help fill the void, the TSO team put together a livestream concert. Scaling the show from an arena where TSO deploys a spectacular light show and all manner of pyrotechnics and special effects to something that works on a TV or computer screen was a challenge, but the livestream, which featured the 1996 “Christmas Eve and Other Stories” album, went over well.

In a way, the livestream took TSO back to its beginnings, before founder/songwriter, the late Paul O’Neill, was financially able to create the visual concert extravaganza fans now know and love. The livestream also revealed an important truth to Al Pitrelli and Jeff Plate, the musical directors for TSO’s two touring ensembles.

“If you go back to our first show in ‘99, Jeff and I, I think we had, I don’t know, seven or eight cities on the tour,” Pitrelli said in a teleconference interview shortly before rehearsals for this year’s tour began. “We had a box truck, two buses, and a fog machine. The curtain came up, the lights went down, and we played the songs from top to bottom. It wasn’t the sensory overload that it grew up to be. It was a beautifully written story that Paul O’Neill put pen to paper back in ‘95, and we started recording in ‘96. The people fell in love with the characters. They fell in love with the story. They fell in love with the sentiment of it. Because at the end of the day, at the center of Paul’s story is about missing somebody, and everybody misses somebody, especially around the holidays.

“I think during the livestream, it showed me, in particular, two things,” he said. “One is that people, they love the story. It didn’t have all the special effects. There’s no physical way we could do that. But the band played amazing. The singers brought the characters to life. I heard after the fact that we sold almost 250,000 of those things. From a financial standpoint, I could care less. It didn’t matter to me. What really made me emotional is that people wanted their tradition. Albeit virtually, we were all joined together.”

Now Pitrelli and Plate are taking the two touring ensembles of TSO back to arenas across the country, including two shows at the Enterprise Center in St. Louis Dec. 30. It will be different than in the time before people heard of COVID, but the protocols involved with taking the dozens of musicians and crew members in each touring company on the road aren’t dampening the enthusiasm for being back on stage or the willingness to take whatever COVID precautions are necessary along the way.

“I think I could speak for Jeff on this one saying we’ll show up in hazmat suits and play,” Pitrelli said. “We’re just like caged animals chomping at the bit. To not do what we’ve been doing for 20 something years, to have that taken away from us last year, you love something this much, once you have it back in your hands, you love it, cherish it, protect it that much more. So I just want to put a guitar around my shoulders and stand out in stage center and say, ‘Let’s go.’”

And 25 years into TSO’s history as a recording act, Pitrelli and Plate know fans are ready to see TSO in person again, but they’re also as surprised and gratified as anyone at TSO’s success. After all, when O’Neill founded the project, he envisioned something new and unproven in contemporary music.

For one thing, TSO would combine a rock band with an orchestra playing concept albums/rock operas with cohesive story lines. It was a genre O’Neill, who passed away in 2017, called rock theater. Instead of building an image around a singer, guitarist or conductor, the ensemble would use multiple singers and a range of instrumentalists who would remain largely anonymous to listeners. How to market the group was a big question.

Plenty of industry people questioned whether TSO could be viable financially. O’Neill took a meticulous approach to making albums, searching for the perfect singers to voice the characters in his lyrical stories and bringing in whatever types of instrumentalists his music required – steps that expanded the recording timelines and budgets. As for touring, taking such a large musical group on the road with the kind of high-tech visual show O’Neill envisioned would be expensive as well. The group would need to play arenas from the start – something no music act had done.

Nevertheless, Atlantic Records got on board with O’Neill’s vision and signed TSO. The label has been rewarded as the trilogy of Christmas albums became hits that continue to rack up new sales every holiday season.

The first release was 1996’s “Christmas Eve and Other Stories.” Spurred by the hit single “Christmas Eve Sarajevo 12/24,” it has sold 3 million copies and set the stage for the other two holiday rock operas that make up TSO’s Christmas trilogy -– “The Christmas Attic” (1998) and “The Lost Christmas Eve” (2004) – which have each topped 2 million copies sold. In addition, the group has released a Christmas EP, 2012’s “Dreams of Fireflies (On A Christmas Night),” and three full-length non-holiday rock operas – “Beethoven’s Last Night” (2000), “Night Castle” (2009) and “Letters from the Labyrinth” (2015). In all, the group’s CDs and DVDs have sold more than 12 million copies and generated 170 million streams in 2020 alone.

The group’s annual Christmas trek is easily the most popular holiday tour going. Since its debut in 1999, the holiday tours have played to more than 15 million fans and grossed $700 million.

“It’s just amazing to be on stage all these years later after all the doubt and the questions and everything circling around this thing when it first started,” said Plate, who joined Pitrelli for the teleconference interview. “To be able to be doing this all these years later with millions of people on board with you every year, it’s something that we’ve become a tradition. That’s a pretty heavy thing to say. But I think last year really showed that with the amount of people that turned out for the livestream but just how upset people were that we were not touring, not just fans, but also band members, everybody involved.”

This year, as in 2019, TSO will perform the “Christmas Eve and Other Stories” album as a first set, followed by a selection of other material in the second set. That 1996 debut album was played for a dozen years when TSO started touring, then was set aside to feature the other albums in the Christmas trilogy on subsequent tours. Bringing back the album that began the TSO journey was special for Pitrelli and Plate and they’re excited to perform “Christmas Eve and Other Stories” again this year.

“Yes, this is my favorite show,” Plate said. “I’ve said all along, I think this story is really the star of the show. This is what kept bringing people back every year was when people connected with the story and realized it’s about them. It’s about everybody. This is just how people, just word of mouth, kept coming back. These audiences kept building every year. This (was) our first venture with the Trans-Siberian Orchestra, ‘Christmas Eve and Other Stories,’ so this has a lot of meaning. It’s very special for all of us. The songs, the story, (everything) about it, I think is fantastic.”