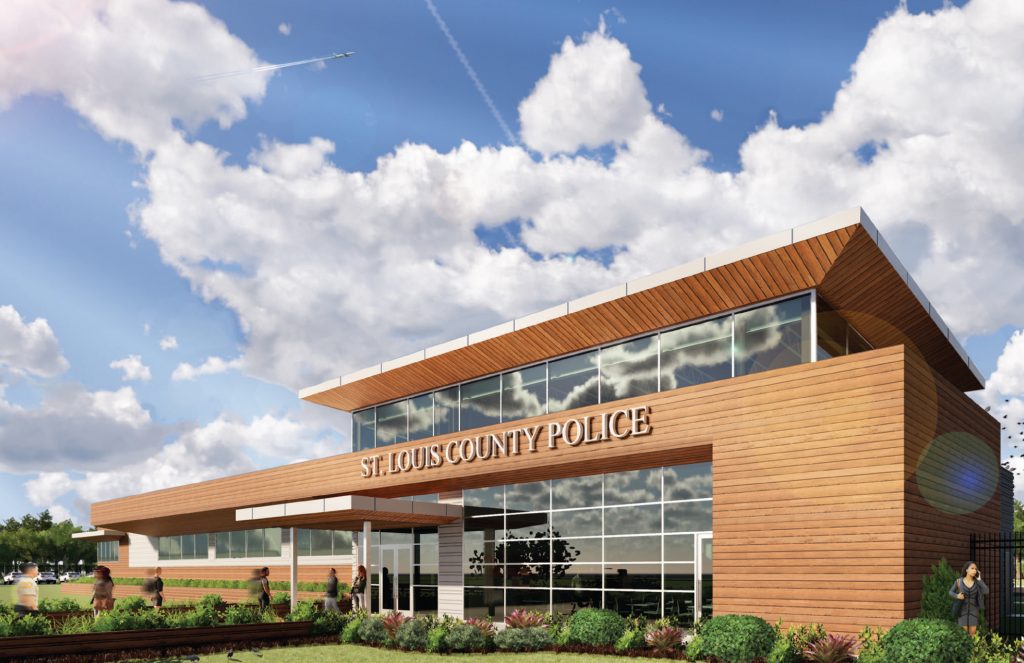 Above: A rendering of the Affton Southwest Precinct.

The St. Louis County Council learned last week that the county scuttled plans for a new county police precinct in South County to build the new North County Precinct instead, but 6th District Councilman Ernie Trakas said Wednesday he came to a deal with County Executive Sam Page to move ahead with both precincts.

Trakas, R-Oakville — who is being challenged by Rep. Bob Burns, D-Affton, in the Nov. 3 election — said in a press release Wednesday that he has “secured an agreement” for construction of the stalled precinct. Construction is now expected to start in spring 2021 in South County if the council approves financing through bonding this winter, the 6th District representative said.

County voters approved plans for two new St. Louis County Police Department precincts, one in South County and one in North County, in April 2017 as part of the Proposition P countywide sales tax for police and public safety.

County officials have told The Call since the passage of Prop P that the new Affton Southwest Precinct/3rd Precinct would be built before the new North County Precinct/1st Precinct, and the precinct in South County is much farther along, with land purchased, zoned and prepared and designs finished. The new site, on 4.1 acres and five parcels at 11448 through 11530 Gravois Road, is 2.6 miles and a five-minute drive down Gravois from the since-abandoned original location at 9928 Gravois Road.

Designs were finished by the April 2019 resignation of former County Executive Steve Stenger, who oversaw the passage of Prop P two years before he pleaded guilty to federal corruption charges that sent him to prison.

Page, a Democrat who is also up for re-election Nov. 3 against Republican Paul Berry, succeeded Stenger. Designs and architectural renderings are not yet finished for the North County station, which has also not received the necessary zoning or permits, Trakas said.

In the years since the April 2017 vote, the Affton Southwest Precinct has been forced to move twice, once in 2018 to temporary digs in Crestwood and once in 2019 to office space at 5030 Griffin Road off Tesson Ferry Road in Concord.

Progress on both precincts was delayed earlier this year due to the COVID-19 pandemic, but council members were taken by surprise last week by Budget Director Paul Kreidler, who while outlining Page’s proposed 2021 budget said that the Affton Southwest Precinct was on hold and the new North County Precinct would move forward instead.

Kreidler’s confirmation came in response to a question from 3rd District Councilman Tim Fitch, R-Fenton, a former county police chief, who said he had heard rumors from the Affton Chamber of Commerce that the precinct was dropped.

The new Gravois Road precinct location lies near the intersection of three council districts: Fitch, Trakas and Chairwoman Lisa Clancy, D-Maplewood, who represents the 5th District that includes part of Affton and Crestwood.

The precinct is not the only police news in Affton in the last month. The Affton Southwest Precinct commander during the Prop P vote and in the years since, Capt. Melissa Webb, was reassigned to lead the MetroLink division, and the precinct currently has no permanent commander. It’s unclear whether the two moves are related, but Webb was a supporter of the new precinct and what it would do for officers, touring other departments and giving input on the design.

In January 2018, Webb told The Call, “The officers are getting very excited. They would love to have a new building and a new place, especially for this community. It’s so amazing.”

During those years, the South County station appeared to move ahead, while progress on the North County one came later.

“I thought the Affton station was far ahead of the North County station as far as any sort of completion,” Fitch noted at the Oct. 6 budget hearing.

Trakas said later in the meeting that he was shocked by the news.

“It was my clear understanding that that was a priority item, the Prop P funds used to purchase that property were done expressly for that purpose and that in fact the drawings have been completed, the land has been prepared and frankly I find no sufficient excuse as to why that project has been put on hold,” Trakas said. “And if it’s canceled, there will be serious and spirited discussions with respect to that.”

After Trakas followed up with county officials, construction is now expected to begin in early 2021 on the Affton Southwest Precinct, after the county uses bond financing this winter to pay for the higher cost of the two new precincts. Under the deal, both precincts would move forward at the same time, Trakas said.

He said the decision to move forward with only the North County station had been made by Barton when she was sworn in after the retirement of former Chief Jon Belmar, who had championed the new precincts as part of Prop P.

The Affton Southwest Precinct has been forced to move twice since the April 2017 vote. In 2018, the county was forced to abandon the longtime rented location of the Affton Southwest station because of a roof leak that appeared to cause mold. The precinct temporarily moved to Crestwood and now to a location in Concord in office space off Tesson Ferry Road.

The precincts were originally envisioned to be built on parallel paths, Trakas said, but Stenger moved ahead with the South County precinct first.

In a letter to Page before their meeting, Trakas said that after consulting with officials from the county Department of Public Works, he is blaming Stenger, whose administration underestimated the costs to build the precincts by half in order to stretch the proposed Prop P budget. Each precinct was originally projected to cost $6.5 million, but now each is expected to cost $13 million.

Trakas said in his letter to Page that for reasons he did not know or agree with, Barton had decided earlier this year to delay the Affton station.

“This agreement with the County Executive is a big win for the safety of residents in the Affton community and all of County Council District 6,” Trakas said in a news release. “Construction of this station was at the heart of this community’s support for Proposition P and to delay this project any further was unacceptable to me and the residents of the district.”

Trakas said he worked with county officials to identify “potential funding for these two precinct projects as part of the county’s bond transactions this winter. With the Council’s approval, the bond transactions could include financing for both precincts and allow this construction to stay on schedule.”

The councilman said in the release, “The public safety of my district and the safety of my constituents is at issue here and I want to thank County Executive Page and the Department of Transportation and Public Works for their review of these projects and their willingness to work together to find a tenable solution for the residents of Affton and Council District 6. I will encourage my Council colleagues to support financing for both precincts in the bond transactions this winter and construction of the Affton police station should begin in early 2021.”

See renderings of the proposed new Affton Southwest Precinct below: