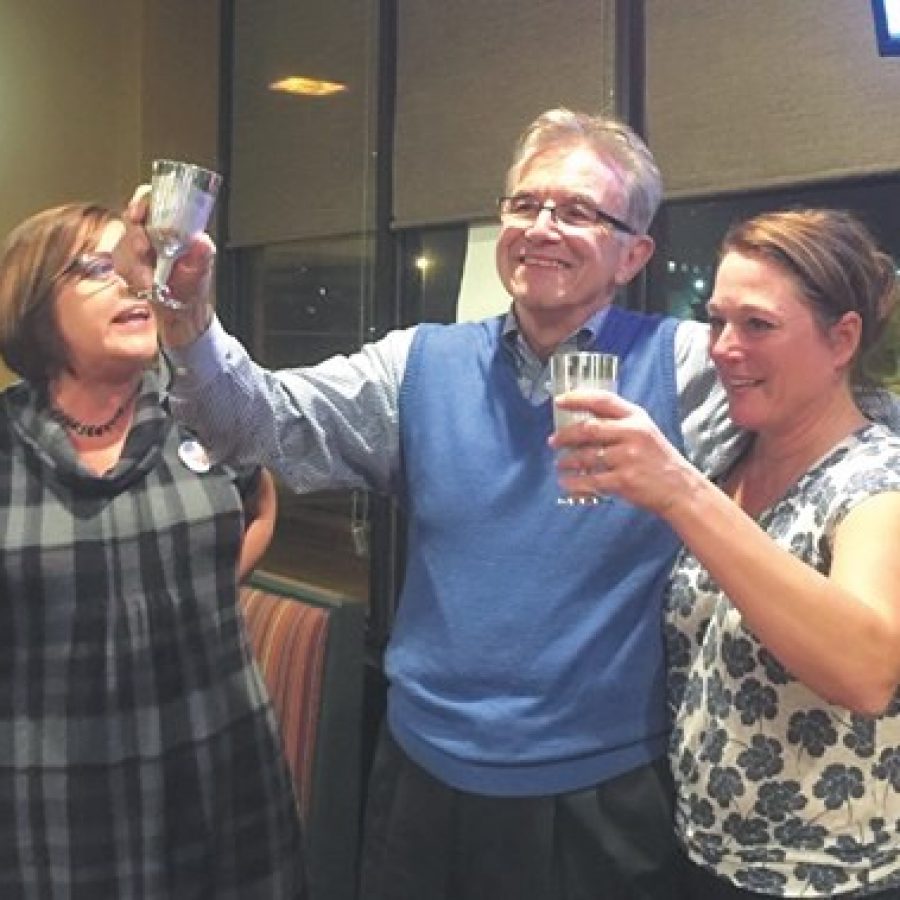 Like voters across the country, south county voters took a decisive stance last week against the political establishment by electing Ernie Trakas to the County Council.

“This is not my victory, this is Bauer Road’s victory. This is your victory, not my victory,” Trakas said at his Nov. 8 victory party at Dulany’s, near the proposed site at Tesson Ferry and Bauer Roads of a now-withdrawn apartment complex that drew widespread criticism from south county residents for the Clayton officials who supported it.

Trakas will take office Jan. 1 as the “mayor of south county,” where he will serve 140,000 constituents across Oakville, Lemay, Affton, Concord and Green Park.

Yaeger was endorsed by County Executive Steve Stenger to replace 6th District Councilman Kevin O’Leary, D-Oakville, who did not run for re-election. O’Leary was also endorsed by Stenger, who held the 6th District seat from 2009 to 2015, when he was elected county executive.

In his victory speech, Trakas promised to stand firm against a city-county merger — “not on my watch” — and against MetroLink expansion to south county, along with reforming the zoning process so that residents with concerns about developments “can get a legitimate audience and be heard.”

But perhaps more important than individual issues, things have changed for 6th District residents who feel perpetually ignored by Clayton, vowed Trakas, who is an attorney for Mickes O’Toole and represents school districts across the state.

In a statement to the Call, Stenger welcomed Trakas to his former seat.

“I welcome Ernie Trakas in his position as county councilman,” Stenger said. “I look forward to working with him to move our county and the 6th District forward.”

In a year where several races took everyone by surprise, Yaeger said national forces driven by surprise presidential winner Donald Trump and a Republican sweep of races across Missouri affected the 6th District outcome.

“I was shocked,” she said. “As some people said, I got run over by the Trump train. It just seemed like voters wanted new people everywhere.”

The thousand-vote victory was close, but Trakas said he’d take it.

“You know like they say, they’re all line drives in the record books — Texas Leaguer, you know, a blooper fly,” he said. “So a win’s a win, folks, a win’s a win.”

With backing from Stenger and his base, Yaeger outraised Trakas 3:1.

Although Trakas had never run for office before he entered the 6th District race, his name is well-known in south county because his wife, Lori, served on the Mehlville Board of Education until she was defeated after her first term in April.

She served as his campaign manager and gave her own mini-speech on election night, thanking his volunteers.

Near the end of an otherwise congenial campaign, Yaeger’s campaign sent out fliers with devil-like figures that recounted some of Lori Trakas’ votes under the headline “Trakas Votes to Defund Education,” with smaller print noting that the vote was taken by Lori, not Ernie. The mailers also mentioned letters that a newspaper reported that Trakas sent to critics of the Fox School District when he served as the school district’s attorney under former Superintendent Dianne Critchlow.

“All through the campaign, we were gracious to each other,” Yaeger said. “I think toward the end some of the people that worked on my campaign might have gone a little bit on their own, but that’s the way things go.”

The former state legislator appeared to be the frontrunner in the race until the apartment complex became a contentious issue, going through zoning twice during the campaign before Stenger announced that Oakville-based developer J.H. Berra dropped it a month before the end of the race.

Stenger had endorsed O’Leary, who upset his constituents this summer when he suddenly stopped responding to phone calls and emails from them and the media after the introduction of the Bauer Road complex. The development’s neighbors said he would not meet with them.

Trakas often appeared alongside the opposition to the apartments and spoke to the council against it, but Yaeger at first declined to take a stance and then later said she opposed it due to many concerns outlined by residents.

“I was basically in the same position he was in thinking about it, but I just didn’t go and talk before the council and that, because I didn’t think that was my place at that time,” Yaeger said.

But given a chance to do it over, Yaeger said she didn’t believe she would change anything.

“It really doesn’t matter why, he won, I lost, and I’ve got to go on from there,” she said, noting that she may step away from some of the many community activities she’s involved in to pursue other hobbies and spend more time with her family.

“I didn’t lose because I didn’t have support, because I did — the business community, individuals, first responders,” she added. “But it just wasn’t quite enough.”

But there are no hard feelings from the race. In what Yaeger said was a “gracious” call Monday, Trakas asked to use Yaeger as counsel on south county issues.

Since Trakas is from the Oakville and Concord side of the district, Yaeger said she was worried at first that he may be more focused on those areas than on the rest of the 6th District.

“But he said he wouldn’t forget the inner-ring communities, Lemay and Affton, so that made me feel better,” she said.

As for how Trakas will govern, he ended his victory speech by echoing the promises he makes to juries.

“I’ve talked to some of you about how I always open to juries, and I’ve told them that when a politician gives a campaign speech, they can promise the sun and the moon because they don’t have to deliver on anything before you cast your vote,” he said. “Well, now this is an opening statement, folks. I know I have to deliver on everything I’ve promised you, and I welcome that responsibility.

“If I tell you I’m going to do something, take it to the bank, because I’m going to do it. So I want you to feel good tonight — know that we pulled this one off, and you’ve got a voice now and somebody that’s going to listen to you and respond to you when you want to be heard.”