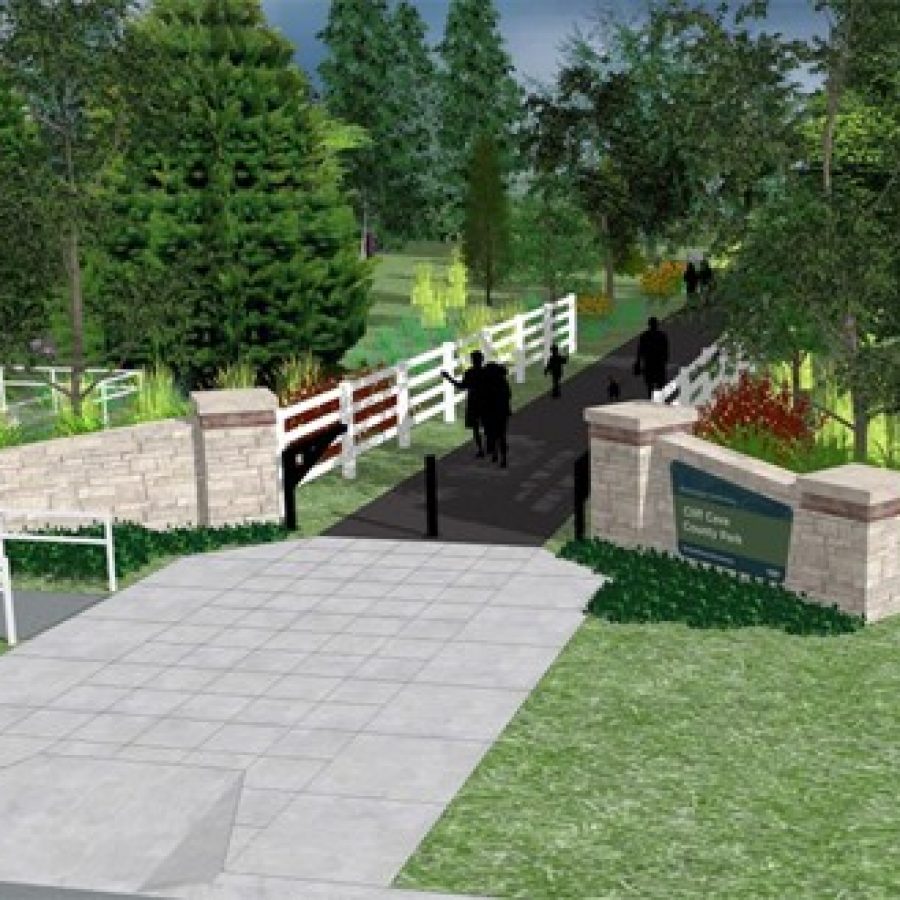 The proposed entrance to the Cliff Cave trail at Telegraph and Erb, now on hold pending a safety study.

Neighbors opposed to a trail expansion in Cliff Cave County Park took the county to court this week, arguing that construction should stop because of endangered bats and alleging that the county approved the deal illegally.

Despite neighbors’ attempt to stop the $5 million trail by suing the county, regional trail district Great Rivers Greenway, or GRG, finished taking down trees at two sites in Oakville last week to make way for the 2-mile paved loop.

The path will wind up and down the bluffs from a trailhead on Cliff Cave Road.

But he allowed the case to go to a preliminary hearing Monday so that both sides could bring documents to argue basic facts of the case, including whether money for the trail comes from the county or GRG.

Plaintiffs Kenneth Elliott and Joan and Nicholas Steska are represented by Great Rivers Environmental Law Center, a nonprofit law firm, and were in court Monday along with Elliott’s wife, Amanda.

County Counselor Peter Krane argued at both hearings that the Oakville plaintiffs have no standing to sue because the county is not directly paying for any of the trail extension. Instead, the money is from taxes collected by GRG, which receives funding for trails from a sales tax in St. Louis County and city and St. Charles County.

At Monday’s hourlong hearing, Vincent made no final decisions, but granted a technical motion that allowed the law firm more time to examine subpoenaed documents the county handed over to the law firm Monday morning.

Vincent had not yet made a decision in the case at the Call’s press time.

Krane filed a motion to dismiss, arguing that the neighbors could not bring suit against the county for the trail because the county is not funding the trail.

“I think the allegations may not be sufficient, but I’ll give you an opportunity,” Vincent said to Great Rivers attorney Bob Menees. “Once you can show me that there’s funds generated by the county, then we’ll proceed.”

An operations and maintenance agreement for the trail was hung up at the County Council for months by 6th District County Councilman Ernie Trakas, R-Oakville, after he took office Jan. 1, until County Executive Steve Stenger circumvented Trakas and said the agreement had only gone to the council as a courtesy.

With Trakas and the neighbors in the courtroom Monday, Krane and Menees didn’t discuss the bats, but mostly traded arguments over whether the county or GRG funded the $4.6 million trail or the estimated $500,000 to $1.7 million in planning and design costs that came with it.

GRG Communications Manager Seth Treptow told the Call that the greenway funded the entire project, but Menees said he believes that the county either funded the $1.7 million or will incur significant costs from a 20-year maintenance agreement that should be approved by the council.

Along with the motion to dismiss, one of the rulings Vincent is set to make is whether the neighbors have standing to sue.

“This is not a complicated case,” Vincent said near the end of the second hourlong hearing. “I guess you’re disputing the one fact of whether the county is funding the project, and if that is disproven, they can’t prove (the case).”

“If we’re not using our money, then they don’t have standing,” Krane said.

“We believe there are taxpayer funds ready to go on this project,” Menees said. “They can have standing as taxpayers, or as neighbors adversely affected by the structure.”

As evidence of the county funding the trail, Menees produced a March 11 email to Trakas from Dave Buckel, the Oakville-based owner of GRG’s contractor on the project, Ideal Landscape, to Trakas.

Summarizing the email, Vincent said that Buckel asked Trakas not to hold up the project since $1.7 million in taxpayer funds had already been spent on it.

“That’s GRG, not the county,” Krane said. “Ideal Landscape is run by a guy who is a resident of St. Louis County and was im-ploring Mr. Trakas not to hold it up. That’s not evidence of direct expenditures.”

“Yeah, it doesn’t say anything about government expenditures — it says ‘the taxpayers already invested $1.7 million,'” Vincent said. “What he did not say was ‘expenditures by St. Louis County.'”

Given more time, the neighbors could call Buckel as a witness to see where his funding is coming from, Vincent suggested.

Menees and his fellow Great Rivers attorney, Kathleen Henry, asked Vincent to grant his law firm more time so they could dive through the county documents and offer proof of the county’s costs.