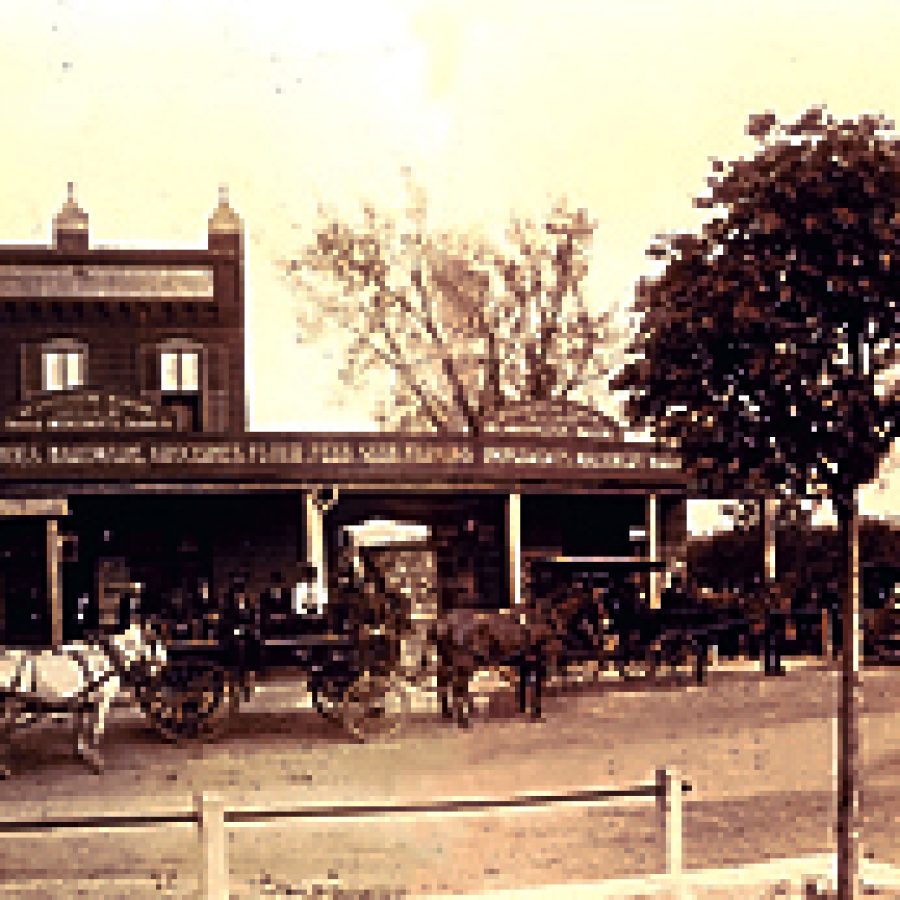 The Winheim Bros. Grocers and General Store was the hub of commerce in Oakville near where St. Paul's United Church of Christ, the Charles Meyer Insurance Agency and the Shell station now stand on Telegraph Road by Cliff Cave Road. It also served as Post Office from 1876 until the early 1900s.

Oakville never incorporated and doesn’t have a city hall like Crestwood or Sunset Hills, but the area is well-known to people.

Unlike well-documented histories of the cities of Crestwood and Sunset Hills, Oakville’s origins are shrouded in mystery as oral recollections begin to fade as they’re handed down from generation to generation.

“I got sick a few years ago and started thinking that all the stories I had been told about the community, and its origins ought to be written down,” said Bill Nottelmann, a local music store owner and philanthropist. “The people who told the stories and the people they talked about were nearly all gone. We were losing more every day.”

He used his connections to mobilize the Oakville-Mehlville Alumni Association, Midwest BankCentre and like-minded residents.

The fruit of that labor was “Reflections: a History of the Mehlville School District and Its Communities,” which was released in 2002.

It is the most recent effort to memorialize the origins of a community that traces its origins back to land grants bestowed on fur trappers and ferryboat operators by French or Spanish kings.

But as many dates of Oakville’s origin can be found as there are history books.

Citing the large number of towering oak trees in the area, the only thing the books agree on is the name comes from Justice of the Peace Johannes Schulte sometime in the late 1800s.

The centennial was celebrated at Frankie’s Twin Pools, a facility still visible past the intersection of Telegraph and Fine roads near the Meramec River. The centennial featured a three-day horse show sponsored by the committee.

The show featured 10 events in each of the western and English divisions. Bessie Eek was hired to play the organ.

“They called us and asked if we would donate the organ so they could have entertainment,” Nottelmann recalled.

Other than the tie-in with the horse show, little else would seem to associate 1959 with the community centennial, according to local historians.

“I know of no significant event that took place in 1859,” said Esley Hamilton, author of “A History of St. Louis County.” “I can’t imagine why that date was selected.”

Local historian Robert Lightfoot said he didn’t attend the centennial, but worked on his family’s farm.

“I was working on the farm during the day,” Lightfoot said. “In the evening, we sold our produce in Soulard.”

Searching for the origin of the Oakville community, the Call was able to locate an 1844 map by surveyors Sidney E. Morse and Samuel Breese.

Robert G. Schultz’s “Missouri’s Post Offices, 1804-1981,” indicates Oakville’s first post office opened in 1841 at the Winheim Bros. Grocers and General Store on Telegraph Road across from what is now the Oakville Shopping Center.

History-related pamphlets commissioned by churches, a chamber of commerce, various historical societies, the Oakville Centennial Fair Committee and newspaper articles from the time indicate various dates ranging from 1860 through the early 1880s for the origin of Oakville.

During those formative years, the closest thing to a government that ever existed in Oakville was the Oakville Farmers’ Club.

Founders dedicated the organization to the social welfare of the community, particularly marketing its produce and obtaining better prices for items needed to operate the area’s farms.

Only the Utica, N.Y., farmers’ organization predated the Oakville club’s 1866 formation, according to the 1959 Centennial pamphlet. But the Oakville club did not adopt a constitution and bylaws until April 5, 1874.

The club’s meeting hall stood at the intersection of Telegraph and Yaeger roads, where Handyman Hardware is now. It was the site of political rallies, socials and wedding parties.

That’s where Evelyn Getner and Arthur Rhomberg had their wedding reception on Feb. 12, 1944, when the hall caught fire.

“It was a miserably cold day,” Mable Rhomberg Hudson told the Call in February 1991. “It sleeted all morning and snowed all afternoon. I was in the eighth grade at the time.

“The fire started between the roof and the first-floor rafters. They broke the windows in the cloak room and just started throwing things out.

“They started with some of the wedding gifts. Half of those got broken, the other half just got burnt. We always teased them later that they had such a hot reception they burned the place down,” she recalled.

The story of the Rhombergs’ wedding reception illustrates the rich nature of Oakville’s unwritten history and why Nottelmann’s effort to record the community’s history was long overdue.