Tower Tee is growing in its greens as it prepares for construction, reopening 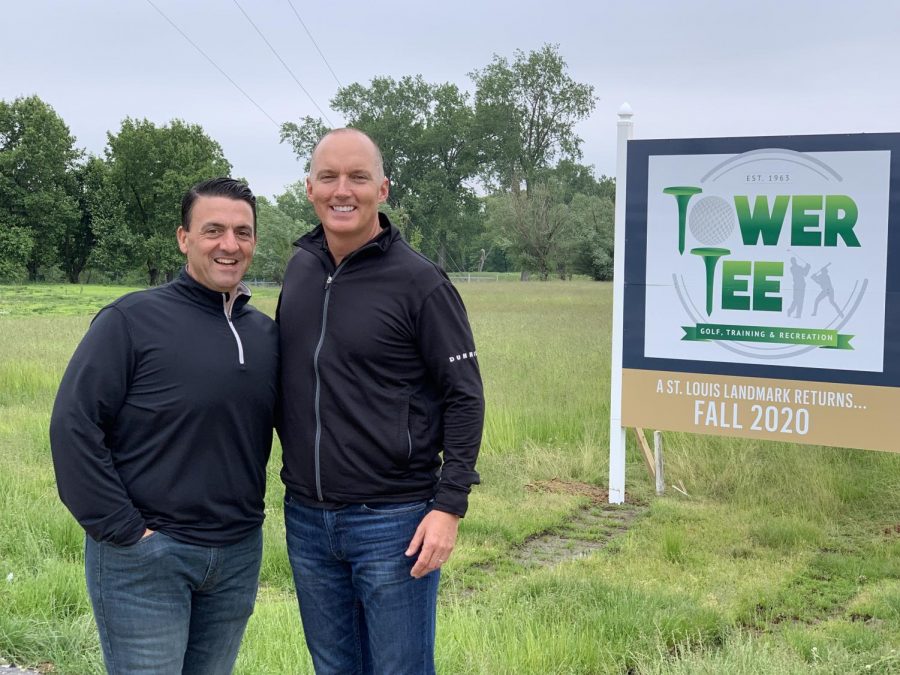 Construction could start any day now on the reimagined Tower Tee, with the developers anticipating the golf course reopening by May 2021, depending on how quickly St. Louis County approves building permits.

May would mark the two-year anniversary of the surprise announcement that two South County natives would buy the 27 acres of Tower Tee and reopen it as a golf course and modern recreation complex. The beloved South County institution at 6727 Heege Road in Affton had been bought for a new subdivision by McBride Homes, with dozens of residents repeatedly showing up to County Council meetings for 16 months to oppose the plan.

The passionate response to save the golf course caught the attention of Arizona resident and Affton native Steve Walkenbach and his childhood friend, Concord resident and Lindbergh Board of Education President Mike Shamia.

A grand opening timed for May could serve as a much-needed post-pandemic celebration for South County. But for Walkenbach and Shamia, it would also mark two years since the journey to the new Tower Tee began with that surprise announcement in May 2019, making that date a sentimental target they hope to meet by kicking off construction as soon as possible. A soft opening could happen even sooner.

“We’re moving forward, and we’re excited and look forward to hosting everyone when we get open,” Shamia said. “I think it’s going to be a great thing, Tower Tee.”

With Shamia managing things on the ground while in near-daily contact with Walkenbach, the business partners are close to getting the sign-off from the county roughly six months into the permitting process, which has included approval from the planning, public works and health departments. By the time The Call went to press, the county had not yet granted the final go-ahead to start construction.

“We’ve been told as soon as today even, but we’re still waiting,” Shamia said last week, noting that some of the professionals who work with the county on permits frequently have said that the back-and-forth over Tower Tee’s permitting seems “extraordinary.”

“If your heart and soul is not in it, the process can get frustrating,” Shamia said. “It’s been a bit of a frustrating process dealing with the county … a little discouraging, but I think we’re very close. For us to be doing sort of this philanthropic project here reviving Tower Tee, that’s one of the most frustrating parts.”

Despite that frustration of nearing the finish line to the kickoff of construction but not being able to cross it, Shamia said he and Walkenbach have “no regrets” about their decision to buy the property and build the facility.

“This project that we’re doing is not something that we’re going into as some sort of profit grab — this is at the heart of a philanthropic project for the community,” Shamia said.

The new Tower Tee promises to be one of the most modern golfing facilities in the St. Louis region, with a more modern golf course with USGA-caliber greens. But it will still have features for those who spent decades going to Tower Tee and want it back in much the same way.

Each step of the way when the developers have posted an update about Tower Tee to Facebook, they have been gratified at the outpouring of response and encouragement from the Affton community and beyond.

“The comments just really bring you back to why this is being done and they reinvigorate you and it makes sense again, even though the construction part of it has been frustrating,” Shamia said. “There’s a lot of positivity about the project and enthusiasm and gratefulness that’s encouraging to Steve and I both.”

Looking back, if Shamia could do anything differently, the one thing he might change is trying to have construction finished sooner so that Tower Tee could have been open during this year’s stay-at-home orders, when business at golf courses boomed. Shamia, a golfer himself, notes that “it’s an amazing sport, it really is,” and that he hopes the people who started playing golf or took it up again this year continue with their new hobby after Tower Tee opens.

Although thousands of people have cheered the reopening, the community will have to come out and support the facility for it to stay in business once it’s open.

Residents driving by have already commented on the wall bunker that’s already built on Hole 2 of the course, directly on Heege Road.

“I was blown away by the amount of people that reached out who were amazed by how nice the hole was and the bunker,” Shamia said. “They just didn’t expect something of that quality to be rebuilt on the course, and I think everybody’s real excited to get out there and try out the course.”

Shamia said that customers of the new Tower Tee will be “amazed” by the quality of the 6,000-square-foot clubhouse, which will have an inside training area, a lounge, expanded concessions and two covered outdoor patios for watching sporting events, along with green space, bocce ball, a playground for children, a foot golf course and miniature golf — along with the batting cages that people already associate with Tower Tee, but with more modern technology.

The driving range will feature TopTracer technology and include a two-story structure.

The 15,000-square-foot practice green will be a top-notch addition to the 9-hole par 3 course. Holes on the course are designed to replicate famous holes around the world.

“Frankly the short game area is going to be the best publicly available practice area in the entire region,” Shamia said. “You can put a plan out or put a picture out, but it’s hard to really understand the quality of the product until you walk out and you see. … I think it’s going to be a sought after place for people to go.”

Kyle Moses is the course superintendent growing the USGA-level greens, and Shamia said he’s doing a “fantastic job with the grow-in.” Getting those greens perfect is part of what may delay a soft opening until later in the spring.

The golf side of things will be overseen by St. Louis native Maria Palazola, who with 26 years of experience will serve as the general manager/director of golf. Golf coach and LPGA professional Palazola met Walkenbach when he took some lessons from her many years ago.

“Golf can be an intimidating sport and one of our goals with the new facility has been to make it more approachable to all,” said Walkenbach. “Maria feels the same way. Players of all ages will easily connect with her. She is rock solid.”

Palazola said, “I have many fond memories hitting balls at Tower Tee with my mother and father, especially on Christmas Day as it was the only place open. … It is hard to believe I will be back after so many years.”