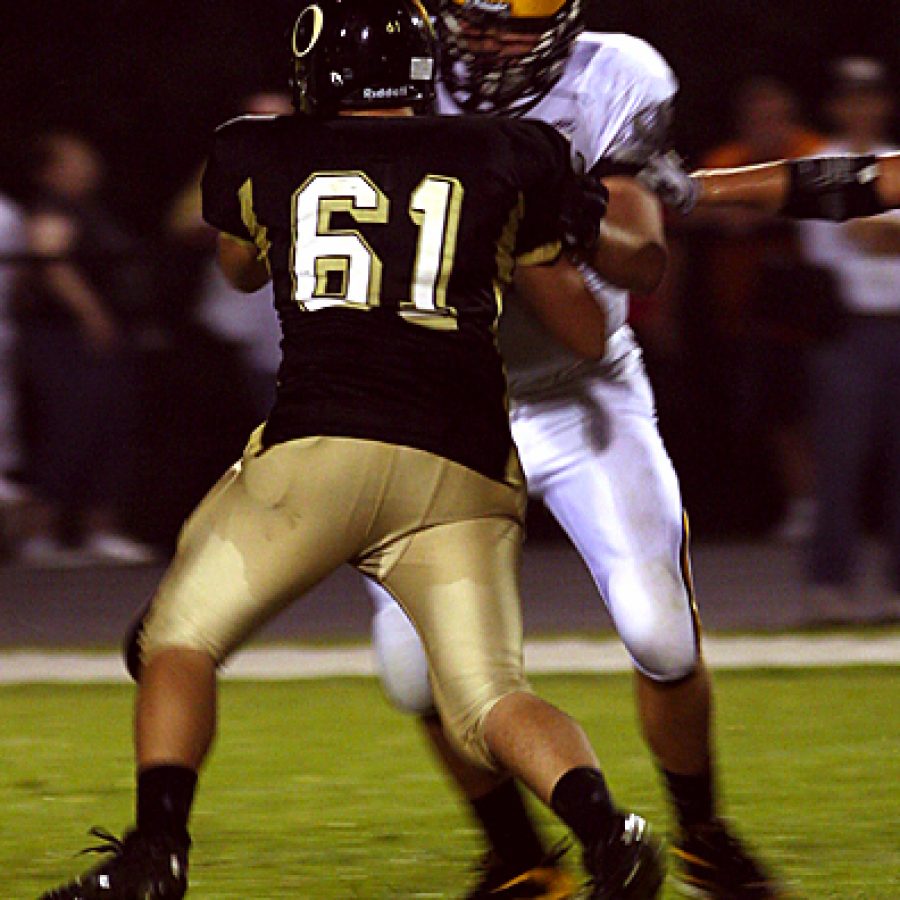 After suffering back-to-back, season-opening losses to Vianney, the Oakville Senior High School football team made sure that it wasn’t going to repeat last year’s 0-7 start with an 18-7 win over the Golden Griffins Friday night.

“It’s about time,” Oakville head coach Arlee Conners said about the Tigers’ victory over Vianney. “We went out there and capitalized on our opportunities and didn’t defeat ourselves.”

Zach Melber gave the Tigers a 6-0 lead on a one-yard touchdown run with 5:50 left in the first quarter. Melber carried the ball five times for 25 yards and a touchdown.

“Zach actually played both offense and defense for us all night,” Conners said. “He played a couple of different positions on defense and was pretty much all over the field for us.”

The Tigers (1-0) increased their lead to 9-0 when Andrew Messer nailed a 36-yard field goal with 7:36 left in the second quarter.

“Andrew’s a kid that we feel very confident in his abilities,” Conners said. “If we need a kick from 20 yards or in, we think that Andrew is very capable because he’s got a very strong leg.”

Midway through the second quarter, the Golden Griffins cut the Tigers’ lead to just two points when Vianney quarterback Dalton Hewitt connected with Conor Hasenmueller on a 20-yard touchdown pass to bring the score to 9-7.

But Darrion Moore hammered in a four-yard touchdown run to give the Tigers a 15-7 lead midway through the third quarter. Moore carried the ball 19 times for 108 yards.

“I thought that Darrion and Paul Taylor ran the ball really well,” Conners said. “We expect both of them to get called upon during every game because either one can be a feature back for us. The more weapons that you have, the better chance you have to win the game.”

The Tigers wrapped up the game midway through the fourth quarter on a 28-yard field goal by Messer for the 18-7 win.

The Tigers return to action Friday when they play host to Mehlville at 7 p.m.

Oakville is back in action this Friday evening as the Tigers host Mehlville at 7 p.m. The game between Oakville and Mehlville (0-1) will be the first conference game of the season for each team and will be a rematch of last season’s Class 6 sectional game in which the Tigers upset the Panthers 24-7.

The Panthers are coming off one of their worst losses in the past decade as they dropped their season opener to De Smet 38-0.

“Mehlville’s a game that’s important for a lot of reasons,” Conners said. “We feel that we can do well in our conference and Mehlville’s going to want revenge for what happened in the playoffs last year.”