Three years in as superintendent, Lake looking ahead for Lindbergh

After combing through $87 million budget, tax hike could be an option 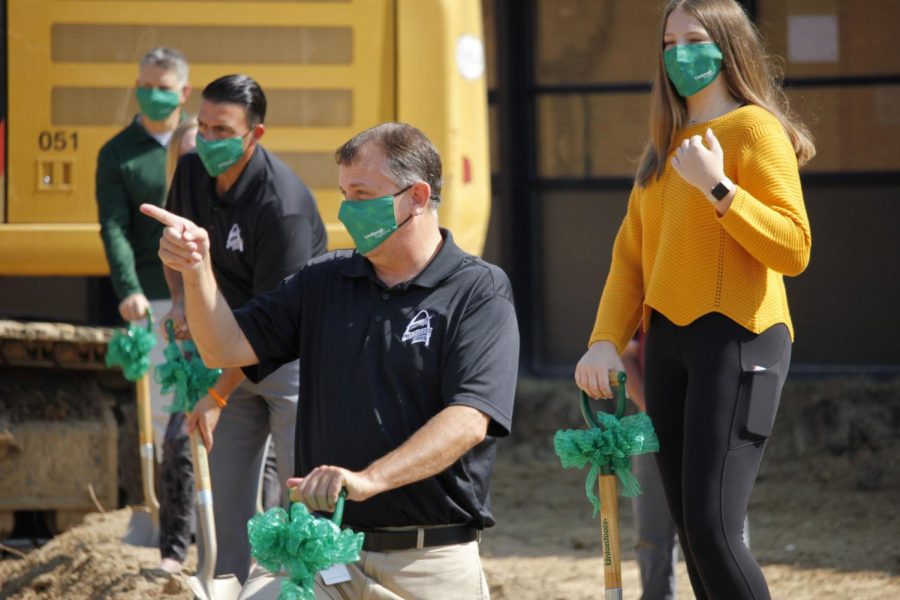 Superintendent Tony Lake has spent three years at the helm of Lindbergh Schools and is set to lead the district for at least another three after the Board of Education extended his contract through 2024.

After getting voter approval for a $105 million no-tax-rate-increase bond issue to build a new Lindbergh High School, Lake said he is now looking ahead to what the district needs in the future financially and facilities-wise and how to fund both of those missions.

The board voted unanimously Jan. 12 to extend Lake’s contract by another year, so he is on contract with Lindbergh through June 30, 2024.

For the 2021-2022 school year, Lake will be paid $227,136 in base salary, plus mileage and district-funded health insurance. That’s up from $200,000 when he started three years ago. Lake’s raise each of the next two years could range from 2-10 percent, but he doesn’t get a raise if teachers don’t. The district is also paying into two pension funds for Lake.

When Lake took over from retiring Superintendent Jim Simpson in July 2018, he was following a leader who over a decade led an academic surge that saw the district rank consistently near the top in test scores statewide — including five years in a row at No. 1. But with stagnant property values that gave the district little new revenue to work with for raises, Simpson faced pushback in the last few years of his tenure over teacher salaries.

Raising those salaries was the most pressing issue to the relatively new school board that hired Lake in January 2018: Most of them had won office on a union-backed slate that defeated incumbents in April 2017. Although some residents and teachers pushed for a tax increase, Lake said he made board members promise to give him a chance to find operational efficiencies to fund raises without raising taxes. With studies showing how dilapidated Lindbergh High School was, he knew facilities had to be the top priority for going to the voters.

“That was the vision of this board to hire me — they said this is what we want, now figure it out,” Lake told the board April 27. “I’m sitting there like, ‘We’ll figure it out.’ … You as a board should be really proud of that.”

More than 77 percent of voters approved the $105 million Proposition R in April 2019, which will pay for a new high school under construction at the current site, plus secure entry vestibules at each school. The district’s Facilities Steering Committee made up of district residents is already looking toward what could be included in the next bond issue. Planning for conservative assessed valuation, the district could ask for a no-tax-rate-increase $45 million bond issue in 2024, or potentially sooner.

Lake was helped in his mission to increase teacher pay by rising real-estate values that saw property assessments soar in the district. But the district can recapture little of those rising property values, since Missouri’s Hancock Amendment requires the district to roll back its tax rate until it takes in only what it made last year plus a small cost-of-living increase based on the consumer price index. In the last five years, those real-estate hikes and the rollbacks that follow have brought Lindbergh’s operational tax rate down to the second lowest in the county at $3.19 per $100 in assessed valuation, only above Ladue and just below Parkway, Rockwood and Mehlville, in that order.

So far, Cracchiolo has found a total of $1.3 million in operating efficiencies in the $87 million district budget, “not cutting costs but shifting expenditures — efficiencies that have been gained,” to the tune of roughly $500,000 a year the two years leading up to the COVID-19 pandemic. With the shift in schooling that caused, some changes had to be paused, like making a profit from Lindbergh’s print shop instead of running a deficit each year. Without the pandemic, Lake said this might have been the district’s best year for finding savings due to changes in busing. Instead, the district found $350,000 in efficiencies.

Besides raises, shifting money in the budget has funded more professional development for all staff, money for a 1:1 technology program for all students and new programs, including tests that measure students’ growth in reading and math over the course of the school year.

Lake still has some ideas to free up funds, but he is nearing the end of combing through the $87 million budget.

“Eventually if we want to continue doing what we’re doing, we’re going to have to generate more revenue through a tax,” the superintendent said.

It’s a different message than his first one to those residents who wanted a tax hike to pay teachers.

“I told our community and I told teachers and I told our employees that we aren’t even going to think about an operating levy until we know exactly how we’re spending this budget and we get every ounce and every efficiency out of this current budget. … I said no — not ’til Joël and I sit down and know where all $87 million go,” Lake said. As for a tax hike, “we’re not there yet, but people need to know that that conversation is going to have to start.”

But the superintendent noted that the district is not yet in “immediate crisis mode.” COVID-19 is still an uncertainty, and officials are still scouring for ways to keep expenses down, Lake noted. That process never stops.

“We’re fiscally responsible and efficient and looking at ways to save taxpayer dollars by maximizing,” he said. “We’re always … evaluating that best-to-next practice.”

But teachers remain a priority. Over the last three years, the district has brought up average teacher salaries to rank 10th out of 22 districts in St. Louis County, which is below the preferred target but far above the 20th ranking from the 2018-2019 school year.

“When I came in three years ago we were hemorrhaging our good teachers, they were leaving for other districts because of our compensation and so our board and myself talked — where do you want to be?” Lake said. “And we talked 5-8 (ranked in the county), not top 5 but in that 8 range, competing with districts so that people aren’t jumping ship to Kirkwood because I can make $12,000 (more).”

In 2017, the year that the Lindbergh National Education Association led protests and teachers “worked to contract,” or spent no extra volunteer time in schools, the district gave a 1.25-percent raise. Lake has given two 4-percent raises, but he said that may not happen again without changing the money coming in.

Cracchiolo highlighted “how far we’ve come” with finding efficiencies, including a shift away from owning equipment like copiers, vehicles and computers to leasing; outsourcing services like landscaping; and changing services that are outsourced like food service and buses.

To a person crunching numbers all day like the CFO, those line items mean even more because unlike one-time expenditures, when a teacher is given a raise that will have to be in the budget in every future year.

“When you give a raise every year it doesn’t go away, and so you start thinking about how we generate that money,” Cracchiolo said.