They thought they were safe, but they caught COVID-19 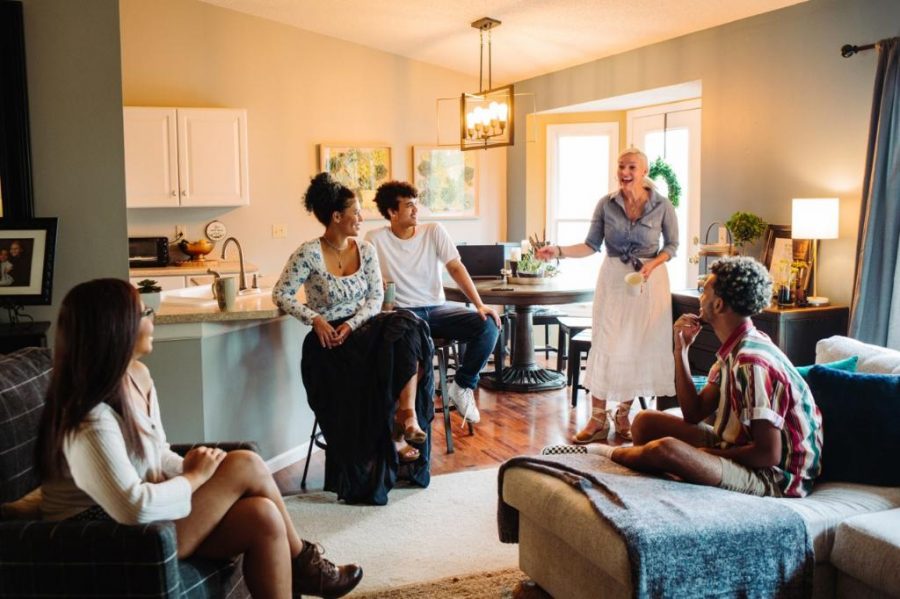 Tracy Verner (far right, standing), talks with her children at their home in St. Louis. They will spend Thanksgiving at home with just immediate family. (photo submitted)

Cat O’Toole says she did everything right to protect herself and others from COVID-19.

“I am strict about mask wearing,” said O’Toole, who works as a server at a high-end restaurant in St. Louis County. “I am constantly using hand sanitizer and thoroughly washing my hands, especially after talking with a guest or walking up to anyone’s table.”

The restaurant she works at has extensive protocols in place. They installed four medical-grade air filters and leave the doors open for airflow when the weather permits. They have contactless payments and mandatory masks for all employees and patrons when they are not seated.

The restaurant’s large patio and multiple dining rooms all have distanced seating.

At home, O’Toole gets her groceries delivered and doesn’t personally dine out. She keeps distance from others as much as possible.

Despite all this, O’Toole caught the virus.

So far she’s lucky and is only suffering from fever and a loss of smell. But the experience has left her shaken and convinced it’s no longer safe to dine out.

“The unfortunate fact of the matter is that no matter what precautions I take, my job still exposes me to unmasked people everyday,” O’Toole said. “I hope that people will understand that no matter how careful you are, you can get this virus, even if you always wear a mask.”

Missouri, like much of the Midwest, is seeing a surge in COVID-19 cases that threatens to overwhelm hospitals. With no statewide restrictions in place, local governments across Missouri have begun clamping down once again in a desperate attempt to slow down the virus’ spread.

That includes St. Louis County, where O’Toole estimates that she sees upwards of 650 guests a week during five shifts at the restaurant.

“When you think about a restaurant, even with good ventilation, you are still talking about a number of people with their masks down, eating and talking and breathing out,” said Spring Schmidt, acting co-director for the St. Louis County Department of Public Health.

The county has issued an order temporarily banning all indoor dining.

“The longer you’re in there,” Schmidt said of restaurants, “the more you’re exposed to it.”

It creates a cloud of “aerosolized respiratory droplets” that builds up in interior rooms, which servers like O’Toole have to walk through all day, Schmidt said.

What it means to be “safe” during the pandemic is changing with the increased amount of community spread, health experts say.

“We all have done thousands of things in the last couple months where we encountered somebody, and we didn’t get to COVID,” said Schmidt. “But the more COVID there is in the community, the narrower your chances get that your next interaction won’t be with someone who can pass COVID.”

With the surge in COVID-19 cases statewide, people have to make a distinction between what it means to lower their risk and what it means be safe.

The Independent spoke with several people who considered themselves hypervigilant, yet still caught the virus.

These are situations that many would have considered to be safe even a month ago — a bank manager having a breakfast meeting outside, an occupational therapist who wears the right protection every day, and a pregnant woman who went to the hospital thinking she was in labor.

“We’re headed for holidays,” Schmidt said. “And they matter to us the most when we’re traumatized and hurting and have been through a really rough year.”

But she, like many leaders across the country, is asking people to rethink their holiday plans and not gather for Thanksgiving.

“These are the people that I care about the most,” Schmidt said. “Caring about them the most means that I need to protect them.”

Tracy Verner is the community development manager at Alltru Credit Union in St. Louis. Throughout the summer, she had her business meetings outside at a nearby coffee shop, believing that it was the safest way to meet rather than indoors.

In October, she met with two bank colleagues and two business partners who don’t work at the bank.

They all wore masks to greet, get their coffee and order food. But after their food arrived, they took off their masks to eat and talk for about an hour. They sat around a rectangular table.

Verner and her colleagues ended up testing positive. The two business partners, who sat at the other end the table, did not. Later they learned that a colleague who they believe was sick but asymptomatic had a family member who was feeling ill that day.

“If anyone in your house doesn’t feel well, stay home,” Verner said.

Her case was thankfully mild, with only body aches and a low-grade fever for about a week. Her own daughter had the virus in the summer, but no one else in the house caught it because she isolated quickly.

“In our new normal,” she said, “we have to measure our risk carefully. Maintain your distance and don’t remove your masks.”

A mother who gave birth to her third child on Thursday morning spoke with The Independent about her positive COVID-19 test. She asked that she not be identified by name.

Her positive test came just nine days before her child was born on Nov. 2.

She and her husband considered themselves hypervigilant because she didn’t want to get sick and complicate her birth or pregnancy.

However at the end of October, she had a false alarm and went to the hospital thinking she was in labor. She and her husband were there for three hours in the early morning, and that’s their best guess for where they caught it.

Her husband tested positive two days before her, and he had eaten in the hospital cafeteria.

Outside of the hospital, they had been to the grocery store and their child’s daycare. But the day care center has not had any cases since February. The timing was about four days after they went to the hospital.

When she began feeling sick, she got tested. Finding out she had the virus left her terrified that her baby could contract it from her.

“Luckily after talking to several people at Mercy,” she said, “newborns born to COVID-positive moms haven’t had it.”

An occupational therapist who spoke with The Independent said though he takes every precaution he’s not surprised he caught the virus.

“My work has done a pretty good job, but we’ve had cases at work,” he said. “I’m careful but with the risk it’s just a matter of time, odds and luck.”

He wears a mask at all times and he’s screened every day before work.

Outside of work, he hasn’t attended any gatherings recently. He only gets carry out from restaurants. When he goes grocery shopping, he wears a mask and wipes everything down. He even changes clothes when he gets home.

“I’m more careful than most people because this is likely to be deadly to my clients,” he said. “Thankfully, because of testing and awareness at my work, it doesn’t look like I passed it to anyone.”

His symptoms started on Oct. 31, and his wife began feeling ill on Nov. 2. Because the virus doesn’t affect people equally, he said it’s impossible to know who was actually sick first.

“I feel lucky that it looks like I had a mild case,” he said, “but I’m knowledgeable enough to know that this thing might not be done with me.”

Schmidt said St. Louis County, like the rest of the state, is seeing many more cases coming from health care workers because they are exposed to more COVID-positive patients.

“Now that they’re seeing so many cases and our hospitals are at the verge of being overwhelmed,” she said, “they’re going through heartbreak to heartbreak and continuing to risk their own health day after day to be there to help someone else.”