NCR attorney tells board, 'I'm getting a sense that we're being picked on' 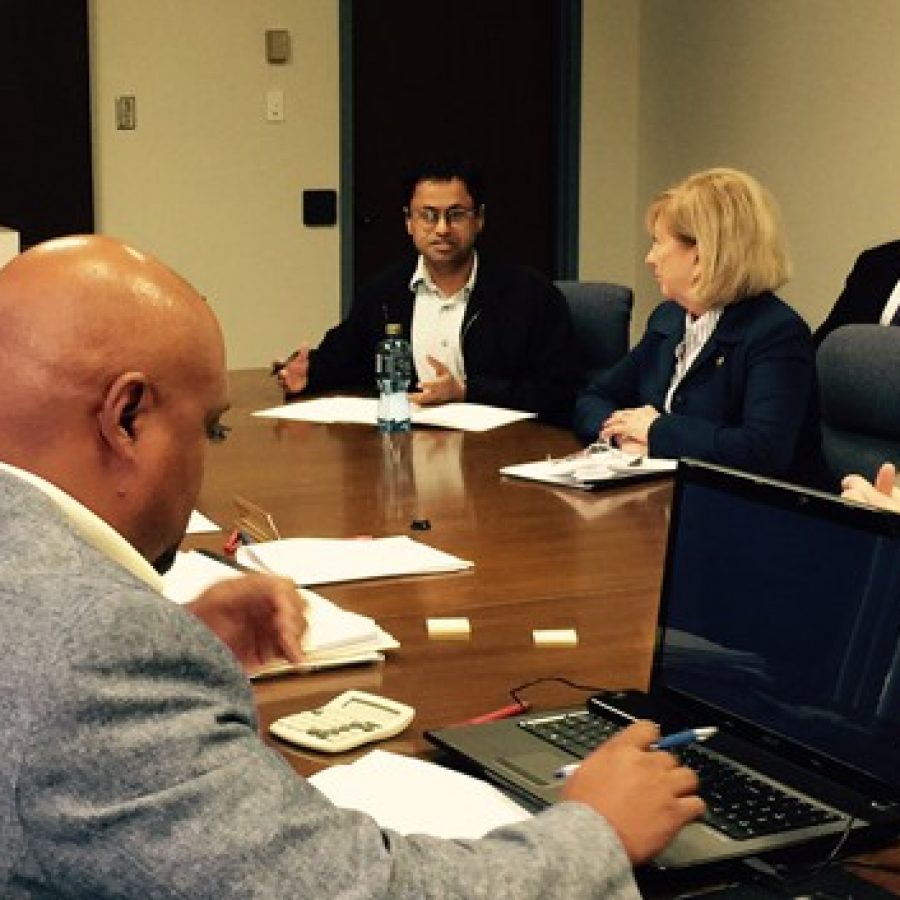 The National Church Residences Telegraph Road senior apartment complex in Oakville is facing opposition at the county level again — this time over whether it should pay property taxes.

Representatives of the Mehlville Fire Protection District and the Mehlville Board of Education, along with Rep. Marsha Haefner, R-Oakville, contended last week at a public hearing held by the county tax board, the Board of Equalization, that National Church Residences, or NCR, does not qualify as tax-exempt under Missouri law even though the Ohio-based housing developer is a nonprofit organization.

Making the case for NCR, attorney Jerome Wallach said he believes the company is being singled out by local officials due to its contentious history in Oakville, and a St. Louis NCR official said that since NCR is already losing money operating the Oakville complex, it has no money to spare for taxes.

The building’s neighbors — including the Goddard School private preschool and the nuns of the Monastery of St. Clare — unanimously contended during a massive backlash by Oakville residents against the complex in 2013 that they received no notice from the county of any of the public hearings on the proposed commercial rezoning for the site at 6050 Telegraph Road that were held in 2012.

The more than 1,000 residents who packed a town-hall meeting at Oakville High School and a series of meetings in Clayton against the project primarily focused on the size and sideways location of the three-story, 45-unit, $5.1 million apartment complex, which was funded by a $6.1 million low-income-housing grant from the U.S. Department of Housing and Urban Development, or HUD.

The building opened in June 2014, and County Assessor Jake Zimmerman sent NCR a $52,518 tax bill this year, based on a $4 million valuation.

But Wallach questioned whether south county officials object to all tax appeals or if his client is being “singled out for special treatment,” adding, “I’m getting a sense that we’re being picked on.”

The Board of Equalization, or BOE, held a hearing on NCR’s request earlier this year, but both the school district and fire district boards were unaware of the issue until Board of Education President Venki Palamand learned about the latest hearing and notified MFPD board Chairman Aaron Hilmer. Two members of the three-person BOE, Emerson Sutton Jr. and Thomas Craddock, heard the arguments for and against the appeal at last week’s hearing. The organization’s appeal rests on a hallmark Missouri Supreme Court case, Franciscan Tertiary Province v. STC, Wallach said.

But Haefner disputed that NCR qualifies and said she is backed by research from Missouri Legislature staffers.

Under state law, not all nonprofits are granted tax-exempt status on property, she noted, adding that in 2013 NCR posted annual revenue of nearly $269 million, with a total net worth of $187 million.

“NCR is looking for a loophole, or selfish interpretation of Missouri law, and should not be allowed to do so,” she said. “To allow NCR tax-exempt status is not only contrary to Missouri law, it shifts an increased burden to all taxpaying citizens who own commercial or residential property in the area.”

Since the fire district is losing money servicing repeated, non-billable 911 calls to the residents at NCR, the MFPD Board of Directors sent the district’s attorney, Matt Hoffman, to represent it at the hearing.

The fire district has lost at least $8,000 so far this year sending ambulances to NCR “multiple times a week,” Hoffman told the BOE. Often, elderly residents will call the department for help after they have fallen or to assist them into bed, and those calls cannot be reimbursed through Medicare, he noted.

“The mission of the district is to help people, but it is a burden financially,” Hoffman said, noting that neighboring fire districts have to provide backup when an MFPD ambulance is in use. “It is a very tough situation fiscally the district is in, and when they go screaming down the street with sirens on to help someone back into bed, they can’t charge any revenue for it … It really is a burden on the fire district. There’s been at least 20 times this year where there’s been no one to bill and they’re racing over.”

Palamand and school board member Jamey Murphy also went to Clayton last week to make the case against the complex’s bid for tax-exempt status.

State statute requires that a nonprofit property be used for a charitable purpose and benefit an “indefinite” number of people, and Palamand said NCR does not qualify because it is selective in what tenants it accepts.

NCR residents do not pay more than 30 percent of their monthly income for rent, but the company still collects a $550 market-rate rent on the apartments, with the difference made up by HUD, Palamand noted.

That means the company rakes in an annual income on its Oakville property of $300,000, he said, adding, “I would contend that if someone gave them the land, gave them $7 million to build it — that’s not a charity if it’s generating $250,000 or more in net revenue. Their status as a charity, in my opinion, is highly suspect.”

It’s an opinion shared by Superintendent Chris Gaines, who was not at the hearing but told the Call that his grandmother once opened a boardinghouse at her farm to make extra money, and it was classified as a commercial operation, not a charity.

“How is that not a business?” he asked.

Murphy said he would focus more on an “emotional appeal” and noted that essentially, the BOE is deciding whether NCR’s money will fund school districts and fire districts in St. Louis County or in its hometown of Columbus, Ohio.

“Are they going to bring it back to Ohio?” Murphy asked. “Should we as a St. Louis County governing council allow them to take that money outside of our community, where currently it’s being used for fire departments and our schools and other municipal services?”

Haefner and her son, Oakville attorney Mark Haefner, were the building’s most prominent opponents during its construction, and Mark Haefner also made the case against NCR at the hearing.

“If in fact they are there with no risk on their own not having to pay any taxes on their profits of $300,000, they are in fact going to be a drain on this district,” he said.

But NCR St. Louis Regional Vice President Sonya Brown said the developer is losing money on the Telegraph Road complex and has no revenues to share.

“Right now we have a negative cash flow,” she said. “We’ve made zero money off this project — we’re operating at a deficit.”

If the local building did make any profits, she contended, they would go back to HUD.

“Nobody’s making money off this,” Wallach agreed, noting that NCR meets the “indefinite” clause because it assists its residents with services like signing up for Meals on Wheels, which is a “relief of the burden on the public dole.”

In response to questions from Marsha Haefner on what percentage of the building’s expenses go back to Ohio for administrative costs, Wallach said he sees no problem if NCR pays its employees with rent money.

“The guy on the fire truck gets paid, the teachers get paid, and they’re tax-exempt organizations,” he said.

But Mark Haefner said the school district and fire district clearly qualify as tax-exempt under the statute since they are government entities, not privately operated.

He also questioned the finances that could lead to the Oakville complex operating at a loss, when it incurs few expenses beyond utilities, cleaning and minimal landscaping. He speculated that any extra money from the property is going to build up a reserve fund for future repairs and maintenance, not to required costs.

“That would be my assumption as to how a property with no mortgage, no upfront costs, 100-percent paid for by taxpayers, is operating at a loss of $300,000 a year with only three paid employees when the national average for a National Church Residences property manager is $60,000,” he said.