UPDATED: Suspect in hospital after officer-involved shooting in Oakville 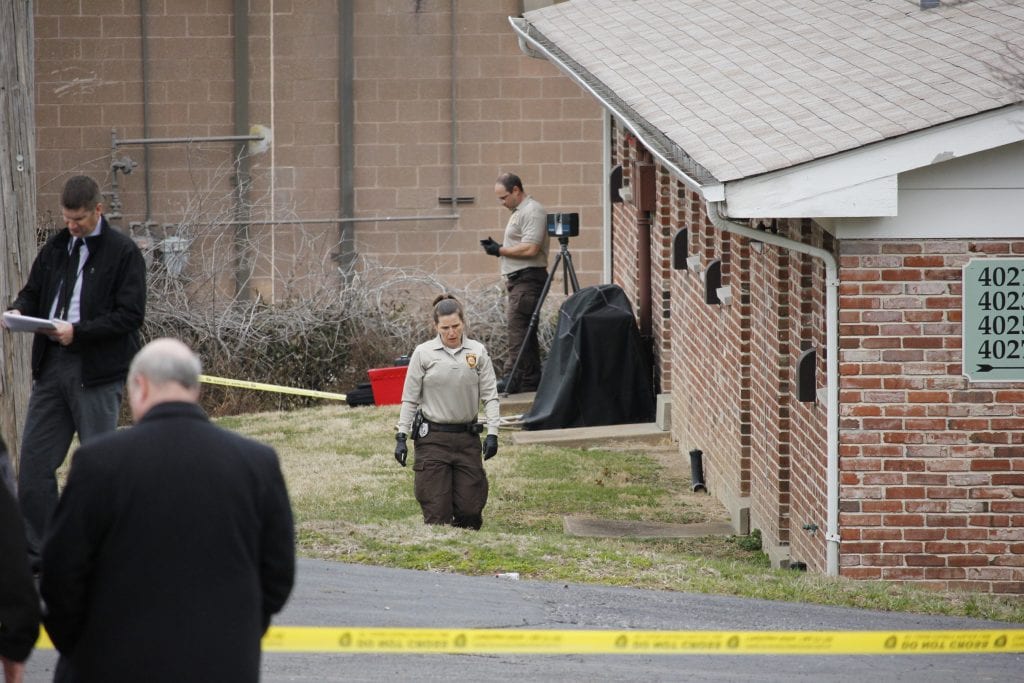 Pictured above: Police investigate the scene of an officer-involved shooting at an apartment complex off Nottingham Estates Drive in South County on March 19. The suspect who was shot by police was taken to the hospital with serious injuries. Photo by Erin Achenbach.

Police shot a man approaching them with a metal pipe Tuesday at Lemay Ferry and Butler Hill roads in Oakville, sending the suspect to the hospital.

A police officer from the St. Louis County Police Department arrived at the Butler Hill and Lemay Ferry intersection for a call for service and then was “involved in a shooting” with the suspect, police said.

The shooting happened in the basement of an apartment complex after police tracked the man down after he was reported as acting suspicious at a business, police said.

Police from the the South County Precinct initially responded to the scene at 12:15 p.m. Tuesday for a call about a “suspicious person with erratic behavior” inside one of the businesses in the shopping plaza in the 4000 block of Butler Hill Road.

The man ran out the back door of the business toward the apartment complex in the 4000 block of Nottingham Estates. More officers came to the scene to find them man, who was in the basement of one of the apartment buildings in that complex, police said.

In attempting to de-escalate the situation, police said, officers used two different types of unspecified “less lethal” force. But the man continued to come toward them, according to the police account.

“In fear of serious physical injury or death to him or others on scene, one of the officers discharged his department-issued handgun at the suspect,” police said.

The suspect was shot at least once and was taken to a local hospital with serious injuries.

It does not appear that any officers were injured in the shooting, a spokesman said.

The officer who fired his gun is 37 years old, with eight years of experience.

The investigation is being conducted by the Police Department’s Bureau of Crimes Against Persons.

Police are asking that anyone with information about the incident call 636-529-8210. To remain anonymous or receive a reward, call CrimeStoppers at 1-866-371-TIPS(8477) with any information.

We’re currently working an officer-involved shooting in the South County Precinct. It happened near Butler Hill Rd & Lemay Ferry. Suspect transported for treatment. No officers injured. We will have more details when they are available. pic.twitter.com/8X6LBiSuyz