Board of Aldermen can override the veto, if it gets six votes out of eight 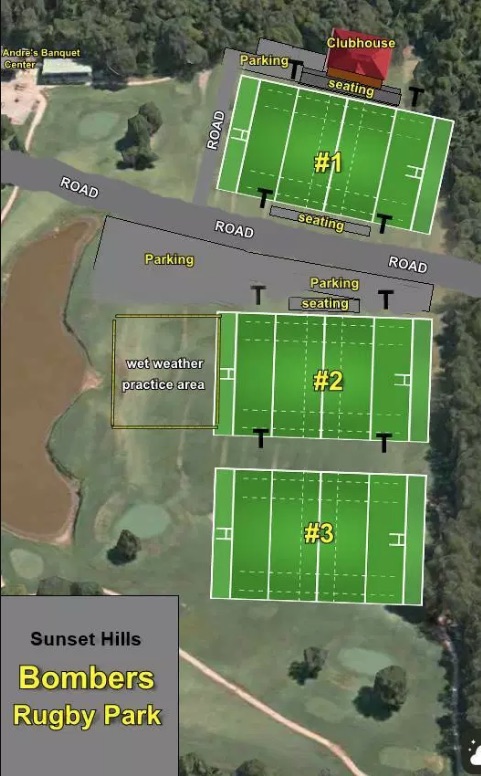 A rendering of the proposed layout and location of the St. Louis Bomber's rugby park.

The future of the St. Louis Bombers Rugby Club facility in Sunset Hills is uncertain after the mayor vetoed an ordinance last week that would have lifted the traffic study rating requirement for the Bombers to proceed with construction, marking what could be the end of a saga that began in 2018.

The Board of Aldermen voted 5-3 for final approval of an ordinance last week to amend the development plan and remove a condition that the rugby club’s traffic study come back with a “D” rating or higher for the intersection at West Watson and Gravois roads.

Last year, aldermen approved a 25-year lease that gives the Bombers over a dozen acres of the southeast portion of the Sunset Hills Golf Course at 13366 W. Watson Road for the proposed rugby facility. The golf course was donated to the city by physician Steven Bander in 2018 and is now known as Steven J. Bander Park.

One condition of the amended development plan aldermen approved 5-2 in September 2019 was that a traffic study of the West Watson/Gravois intersection rate better than “D,” several steps below the highest “A” rating. However, the March study showed the intersection was already “failing” even before factoring in additional traffic from the Bombers’ facility, and that a “D” rating would have been impossible to obtain.

Following the 5-3 vote at the Dec. 8 meeting, Mayor Pat Fribis said she would veto the legislation.

“The board’s elimination and nullification of the traffic study requirements and conditions … is unwise and unreasonable. Safety of the residents should never be sacrificed or ignored for a park activity or sport,” said Fribis. “The Bombers’ traffic will create, magnify and aggravate the dangerous and hazardous conditions determined to exist in the traffic study. If the Bombers rugby organization cannot comply with the conditions originally imposed by a unanimous vote of the board, then the rugby lease should be canceled.”

With the mayor’s veto, the ordinance will return to the board with her objections. From there, the board will reconsider the ordinance with the objections. To override the veto would require a two-thirds majority vote of the board, or at least six aldermen in favor. The next regular meeting is scheduled for Tuesday, Jan. 12 at 6 p.m. by videconferencing.

“Turning our backs on this study is foolhardy. The Bombers have not offered to do anything to mitigate or lessen the dangers and hazards identified in the traffic study. Suggestions were made by the traffic expert in the traffic study that have been ignored by the Bombers,” said Fribis. “Furthermore, the Bombers were offered an alternative site in Minnie Ha Ha Park for their rugby fields, but our offer was spurred. For the above reasons and objections, I veto the bill … and return the same to the Board of Aldermen.”

City Administrator Brittany Gillett told The Call in an email that depending on what happens at the January meeting, the city will continue to “work with our attorney and the Bombers organization concerning the lease. We are certainly hoping for an amicable outcome.”

The board directed in a Nov. 10 5-3 vote, with the same aldermen voting yes and no, to have City Attorney Robert E. Jones revise the original plan from the Bombers to get rid of the traffic study stipulation and bring the amended development plan up for a vote again.

At that next board meeting, aldermen passed the change on first reading with virtually no discussion.

While the aldermen did not discuss the traffic study themselves, the city received 19 public comments at the Nov. 24 meeting regarding the traffic study, equating to nearly an hour of public comment. Because board meetings are currently being held via videoconference, members of the public are submitting their comments in writing to Gillett prior to the meeting, where the comments are then read into the record by either Gillett or Fribis.

“I want to go on record as a Bombers Rugby fan, however, I do not support their new complex under the current circumstances. … The traffic study was completed months ago with intention of ensuring the safety of people that attend rugby games as well as the citizens who use West Watson and Weber Hill roads,” said Fribis, reading a submitted comment from resident Greg Schoenberg, who lives on West Watson, Nov. 24. “As we all know, the traffic study deemed the addition of the rugby fields a safety risk … We as a city will be faced with a public relations nightmare and multimillion-dollar lawsuit every time there is an accident in the vicinity of this rugby park. … It is gross negligence to ignore the results of this study.”

Several neighbors in Tapawingo submitted comments against the rugby development. Longtime vocal opponents of the lease, residents John and Gena Stephens, accused the board of trying to impose its own will onto the residents. John Stephens ran against Fribis in June for the mayoral post and lost.

“Surrounding residents already knew the location inappropriate, and the traffic study proved it. The board’s solution? Disregard the traffic study that they promised residents and unanimously supported,” said Gillett while reading the Stephens’ jointly submitted comments into the record. “Why would the city disregard a traffic study that was required for resident safety? Once again this board dismisses residents and attempts to impose their will. … Our city government continues to prioritize rugby and outside interests over the safety and peaceful enjoyment of the residents. Enough is enough.”