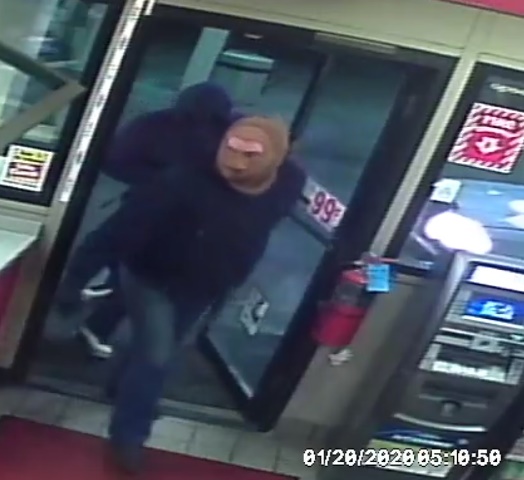 The suspects in the Jan. 20 armed robbery at the BP gas station in Sunset Hills, in images released by Sunset Hills police.

The case remains under active investigation and no suspects have been apprehended, the department confirmed Wednesday.

Police released still surveillance images of two suspects and their car, which is described as a late 1980s to early 1990s-model Mercedes, during the robbery at the gas station at 4504 S. Lindbergh Blvd.

The Sunset Hills Police Department said the two suspects are both white men.

The men robbed the gas station attendant at gunpoint around 5:10 a.m. Jan. 20.

The first suspect, labeled Suspect 1, displayed a black semiautomatic handgun and ordered the male clerk to the floor, police said.

An undetermined amount of cash was stolen, and the two men fled in a white older model passenger car.

The clerk was not injured in the robbery.

Police gave this description of the two suspects:

Anyone with information about the case is asked to call the Police Department at 314-849-4400 or CrimeStoppers at 1-866-371-8477 (TIPS). Information can also be submitted on the CrimeStoppers website at stlrcs.org.