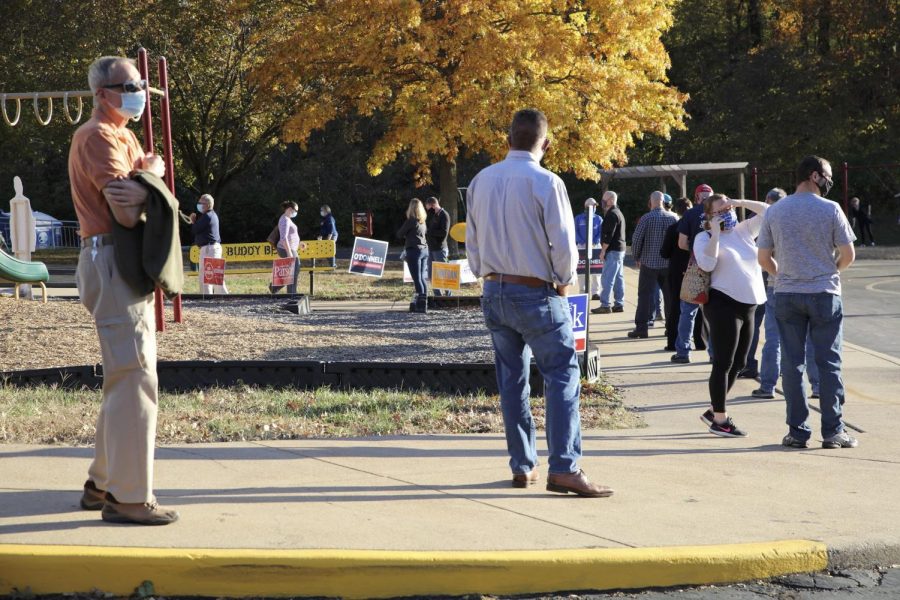 Voters line up to vote at Rogers Elementary in Oakville Tuesday, Nov. 3, 2020.

The Sunset Hills Police Department investigated an alleged case of voter intimidation on Election Day after a voter waiting to vote reported feeling intimidated by an enthusiastic supporter of President Donald Trump.

The voter called police about the possible peace disturbance at the South County Health Center, 4580 S. Lindbergh Blvd., around 12:10 p.m. Tuesday, Nov. 3, the department said in a news release. The health center was serving as a polling place and at times had hundreds of voters lined up to vote.

The caller told officers that a black SUV with Trump writing and American flags on the truck drove through the parking lot of the health center slowly honking a loud train horn.

“The caller stated he felt intimidated by the SUV,” Sunset Hills police said.

No verbal contact had been made between the voter and the SUV’s driver.

Police canvassed the immediate area around the voting site to try to find the SUV, but could not find the car.

The Call tracked voting lines throughout South County on Election Day, and the South County Election Center had 145 voters in line at 11:45 a.m. The LiUNA Event Center next door also served as a polling place, and it had 55 voters at 1:34 p.m.