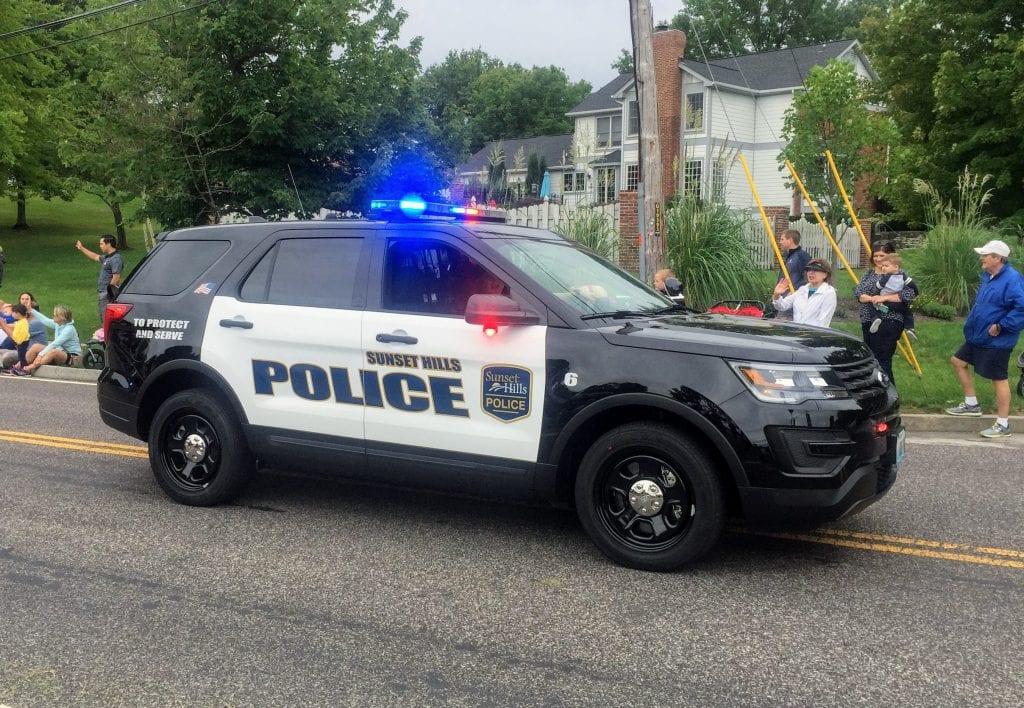 The Sunset Hills Police Department drives in the SunCrest Fest parade in September 2018.

Updated at 5:55 p.m. with comments from Sgt. Robbie Hagen.

Officers from the Sunset Hills Police Department arrested the man on West Watson Road at Bond Place after what police spokeswoman Sgt. Robbie Hagen described as a quick foot chase. An earlier foot chase involved multiple police departments and a police helicopter searching for the suspect. No one was injured as the man was taken into custody.

Police have not yet released the man’s name, but said he was a white man in his 30s with brown hair and a brown beard, wearing a black shirt and jeans.

During the foot chase, nearby South County Technical School and Peace Haven, a long-term care facility, were placed on lockdown at the request of the Police Department as a precaution while officers searched for the suspect.

Police began receiving calls regarding a suspicious black SUV in residential areas west of Interstate 270 at 11:40 a.m. Thursday. While checking the area for the suspicious vehicle, a Sunset Hills officer saw a black SUV that had been reported stolen earlier in the morning to the Hillsboro Police Department.

When the Sunset Hills officer attempted to stop the SUV, the driver fled into Laumeier Sculpture Park, struck a tree and abandoned the car.  He then took off on foot.

A short time later, Sunset Hills police said they began to receive calls regarding a subject matching the description running into a wooded area west of I-270.  An extensive search of the area was conducted with assistance from officers from the Kirkwood Police Department, St. Louis County Police Department and the St. Louis County Police helicopter, but the suspect was not located at that time.

Officers found the man and took him into custody at West Watson and Bond.

“We would like to extend our deep gratitude to everyone that reported both a suspicious auto in their neighborhood, which was determined to be a stolen auto from Hillsboro, MO, and later a suspicious male on the streets off of West Watson west of I-270 this afternoon,” Hagen said.