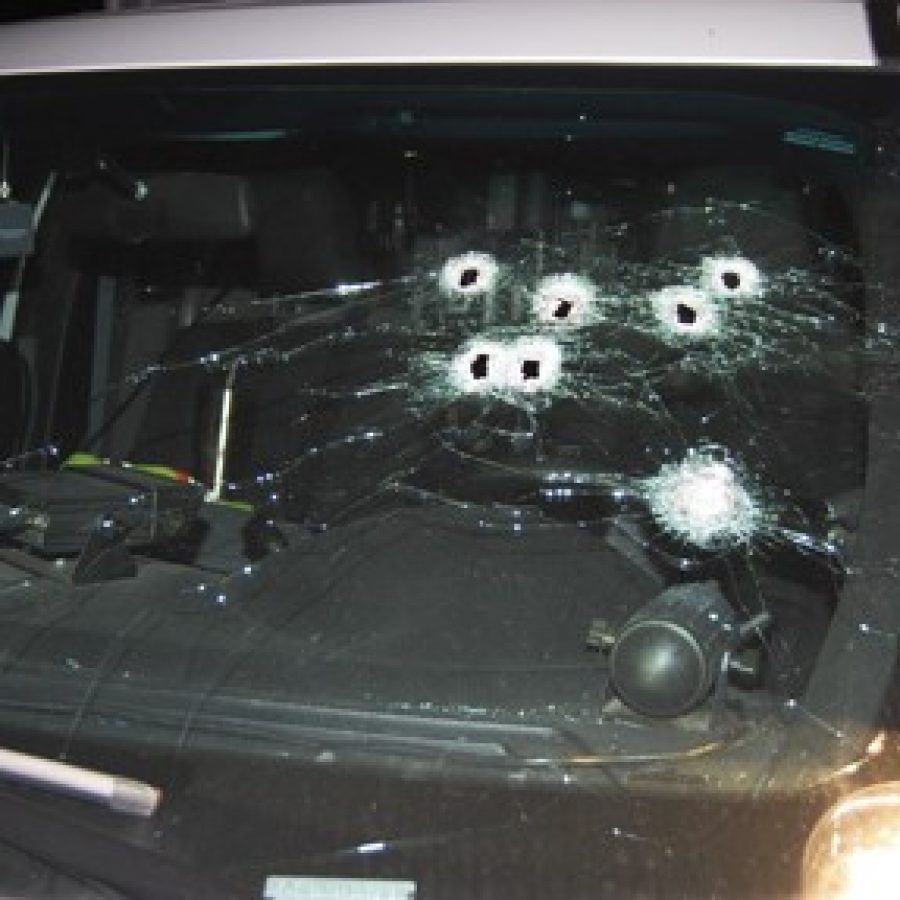 The Sunset Hills Police Department released this photograph of damage to a city police vehicle following a chase in which a suspect and a Sunset Hills police officer exchanged shots.

A Sunset Hills police officer and a man wanted on a felony warrant shot at each other during a police chase that started early Saturday morning in Sunset Hills and ended more than 30 minutes later when the fleeing car crashed in Carondolet Park in south St. Louis.

No officers, suspects or bystanders were injured, and the two suspects police were chasing across city and county lines were taken into custody without incident.

“We are very grateful that our officer was not injured in this incident and that the driver and passenger were apprehended,” Sunset Hills Police Department spokeswoman Sgt. Robbie Hagen said.

About 1:12 a.m. Saturday, an unnamed officer from the Sunset Hills Police Department stopped a convertible with two passengers, a man and a woman, on Gravois Road after a license-plate scan came back as wanted in connection to a felony warrant, according to a police account.

The convertible pulled over for the traffic stop, but when the officer got out of the car, the woman driving the convertible drove off. The initial officer followed the convertible north on Highway 141 and east on Interstate 44, where the convertible sideswiped an assisting Sunset Hills officer’s patrol car, according to the police account.

Multiple city police cars chased the convertible on eastbound Interstate 44 through Sunset Hills. The passenger fired shots at the pursuing patrol cars in the city limits, and officers continued to chase the car to St. Louis city, while the passenger continued to fire shots at officers along the interstate, Hagen said.

As the convertible turned onto southbound Jefferson Avenue in St. Louis city, the passenger fired a bullet that narrowly missed an officer’s head, breaking the windshield of a police car.

The officer returned fire, but none of the officer’s shots hit the man or the woman driving.

During the chase, the fleeing driver ran a red light and hit another car, police said.

The pair continued to flee until the woman lost control of the car at Loughborough Drive and Loughborough Avenue, next to Carondolet Park, about 1:46 a.m.

Both suspects were taken into custody without incident, Hagen said. They remain in custody.

Police say they recovered a loaded .45-caliber pistol at the scene.

Police said Williams had also been convicted of a felony, but court records were not immediately available.