Furrer accused of hitting bicyclist with his car 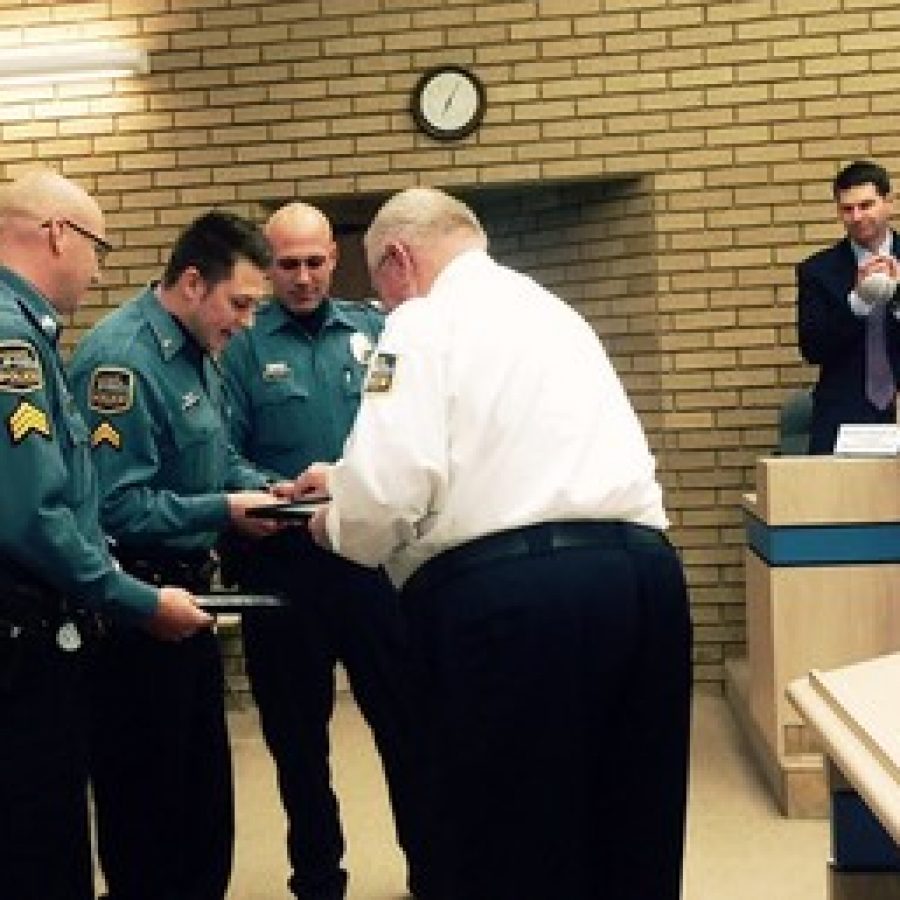 , and check back for more coverage of the mayor’s trial and breaking news on the potential second trial.

In addition to Day 3 below, read the Call’s other comprehensive coverage of Furrer’s trial:

Sunset Hills Mayor Mark Furrer’s jury trial for allegedly hitting a bicyclist could wrap up Thursday after the mayor takes the witness stand.

The mayor is on trial for two felony charges of assault and property damage. If convicted, he would be unable to hold office under state law and could face punishment ranging from a cash fine to county jail time to seven years in prison.

The trial will resume with the mayor’s testimony at 9:30 a.m. Thursday in Judge Thomas Prebil’s courtroom on the fourth floor of the St. Louis County Courts Building, 105 S. Central Ave., Clayton.

From the day of the July 29, 2014, incident, the mayor has told a very different version of events than the three eyewitnesses and the bicyclist, Randy Murdick. The eyewitnesses and Murdick said on the first day of testimony Tuesday that Furrer used his 1991 red Mercedes convertible to intentionally run into Murdick and his $12,000 training bike, then accelerated and took off. Furrer has said that Murdick grabbed onto his convertible, then fell of his own volition.

An engineering expert hired by Furrer testified Wednesday that Murdick could not have fallen toward the car, as he and the other witnesses say he did, because it would violate the laws of physics.

St. Charles mechanical engineer Fred Semke regularly serves as an expert witness in court cases through his company Semke Forensic. He testified that leading up to his appearance in court, Furrer had paid him roughly $8,600, or $275 an hour, for his opinion on various aspects of the incident, which happened on Old Gravois Road in Sunset Hills, by Delta Dental.

In Semke’s opinion, Murdick could not have fallen the way he and the other witnesses say he did because if he was hit from the left, he would have fallen to the right.

When Furrer’s defense attorney Daniel Bruntrager brought up the physics argument as Murdick testified Tuesday, Murdick used a piece of paper to flick the bottom to the right and show how the top went to the left.

In a separate argument, Semke said that his analysis of the car’s tires shows that they only turn slightly even when a turn from 10 o’clock to 2 o’clock is made, demonstrated by a video of Furrer in the convertible while parked in the commuter lots near the scene of the incident.

On cross-examination, Assistant Prosecuting Attorney Alan Key didn’t hide his skepticism of Semke’s various calculations, especially his contention that if Furrer turned the wheel of the Mercedes to the right, the tires would not actually turn to the right, and that if the car had taken even a slight right turn, it would have had to jump the curb and end up on the sidewalk.

At one point, Key openly mused that it didn’t matter if Semke answered his questions or not because the defense witness was “just rambling on.”

Pressed if the Mercedes would turn to the right if Furrer moved his hands from 10 o’clock to 11 o’clock, Semke said it would.

“If a bicyclist is next to that Mercedes, with 22 inches from the curb to the car, once you start a turn from 10 to 11, depending on how fast you are going, you are going to hit the bicycle,” Key said.

“If the bicycle stays there, yeah,” Semke said.

Eyewitnesses Randy Spaethe and William “Bill” Freeman both say they saw the mayor’s hands on the steering wheel jerk to the right to hit Murdick.

The Mercedes would end up on the side of the road if the driver turned “aggressively” from 10 o’clock to 2 o’clock, Semke said, and on a 10 o’clock to 11 o’clock turn like Spaethe said he saw, Furrer’s tires would have hit the sidewalk.

Semke said his calculations on the steering wheel and the height and length of Spaethe’s truck were “fairly close” to what they would have been during the incident.

“Are you always just ‘fairly close’ when you make your calculations, or do you need to have a solid number?” Key demanded, adding that Semke was trying to “replicate the truck you’ve never measured and the height of the man you’ve never met.”

Semke continued to say that the hit on Murdick couldn’t have happened without Furrer’s car going off the road, but Key demonstrated using his hands how close Murdick and Furrer would have been, using the front of the jury box as the curb.

“A Mercedes can’t bump a cyclist with 24 to 36 inches between the car and the curb?” Key said.

“He could do a gentle steer,” Semke said. “I’ve looked at the kinetics, actually replicating the steer. He could take away the space, if it was gentle. But it would have to be slower, more gradual. That’s a possibility.”

“So you could hit a cyclist?” Key said.

In turn, Semke disputed various aspects of the witness accounts, including whether witnesses could have seen Furrer’s hands on his steering wheel, whether Murdick could have flown up in the air as witnesses testified, whether Murdick’s bike was damaged at all and whether one driver passing another driver on the road can see anything while passing by.

At the commuter lots, Semke took photos and videos of Furrer’s hands at the 10 o’clock and 2 o’clock positions and at 10 o’clock and 11 o’clock as Spaethe testified he saw.

Photos from 20 feet behind Furrer’s car, then 40 feet and 60 feet, prove that no one could have seen Furrer’s hands on the steering wheel, Semke said.

But the photos were taken at the top of an incline in the commuter lots next to where the incident happened, not on Old Gravois Road where it actually happened, Key told the jury.

Showing the photos in order, Key asked Semke why he took them with Furrer at the top of an incline, when Freeman testified that he saw Furrer’s hands on the steering wheel from above, as he drove down the hill on Kennerly toward Furrer and Murdick at the bottom.

If the photos had been taken with Furrer at the bottom of the hill and Semke at the top, they would have been facing the sun and he couldn’t have gotten clear shots that day, Semke said.

Key pointed out that Semke did not interview anyone about the incident other than Furrer, did not measure the cars or heights of any of the other witnesses for precise calculations and had no accident reconstruction data to base his observations on since Sunset Hills did not reconstruct the incident.

To imitate Freeman’s 1978 Oldsmobile Cutlass Supreme, Semke mounted a GoPro video camera on the steering wheel of a 2002 Toyota Camry to film behind Furrer as he drove down Kennerly in the red convertible Nov. 24. In the video, the mayor’s hands were not visible from what would have been Freeman’s vantage point on the hill, behind and to the left of Furrer, Semke said.

However, Key questioned why Semke did not recreate the drive down Kennerly until a few weeks ago, when the incident happened in the summer, when conditions and light were much different than the same time of day in November.

Common sense dictates that recreations should be under the same conditions, and with the same car, Key said.

Semke examined Murdick’s bike when Murdick brought it to a deposition June 2 and over the trial’s lunch break Wednesday, and based on his past experience designing carbon-based planes for McDonnell Douglas, he said he does not believe there is any damage to the carbon frame and that he would feel safe riding the bike.That directly disputed testimony from Bike Surgeon shop owner John Greenstreet, who said the $12,000 bike likely has $7,000 damage.

Under questioning, Semke said he has never worked on a high-end bicycle or taken one apart and had not conducted testing on the bike, but none of that mattered, because he didn’t believe there was any impact to the bike.

“You have to have an impact, and I don’t see evidence of that,” Semke said.

On re-examination, Semke told Furrer’s attorney Tom Magee that none of Key’s questions had changed his opinion about the evidence he presented.

The reason the city did not reconstruct the accident came earlier in the day in testimony from the first officer to respond to the scene, Sunset Hills Police Department Cpl. Jeff Senior.

Senior has been honored at Board of Aldermen meetings by the city and the mayor several times over the last year, including last week, when Police Chief William LaGrand honored Senior and two other officers for saving the life of an overdose victim.

At the mayor’s trial, five-year SHPD veteran Senior testified he was instructed by his supervisors that day to investigate the incident involving the mayor as a car accident rather than an assault case, which is why he did not take photos or fingerprints. The mayor was not arrested at the scene and was only charged after LaGrand turned the case over to the St. Louis County Police Department days later.

Unlike the witnesses, Senior said he recognized Furrer immediately as the mayor, and in response to a direct question from Key whether there was any “tension” in the investigation because it involved the mayor, Senior agreed that there was.

One of Senior’s superiors, 38-year veteran Lt. Greg Zveitel, testified for the defense that he had already finished work at 3 p.m., but went to the scene after Furrer called him and asked him to come. He was the last to arrive at the scene, with Lt. Michael Swofford.

Once there, Zveitel examined the car, but didn’t interview any witnesses and said he never got closer than 10 feet to the bicycle. He said he was not in charge of the scene and implied that Swofford was.

Unlike Senior, Zveitel was comfortable investigating an incident involving the city’s mayor.

“I wasn’t personally uneasy,” he said.

In response to questions from Magee, Kim Furrer said she and the mayor have been married for 36 years and have three adult children, Kalen, Andrew and Christina, and she worked for 35 years as a special-education teacher for Special School District at Lindbergh High School.

Key objected and after a long conference with Prebil, Magee returned with a single question about Furrer’s demeanor the day of the incident.

“He was in a great mood, he was excited — he was in a wonderful mood,” she testified, noting how excited the mayor was about that day’s opening of Gordo’s Margaritas restaurant.