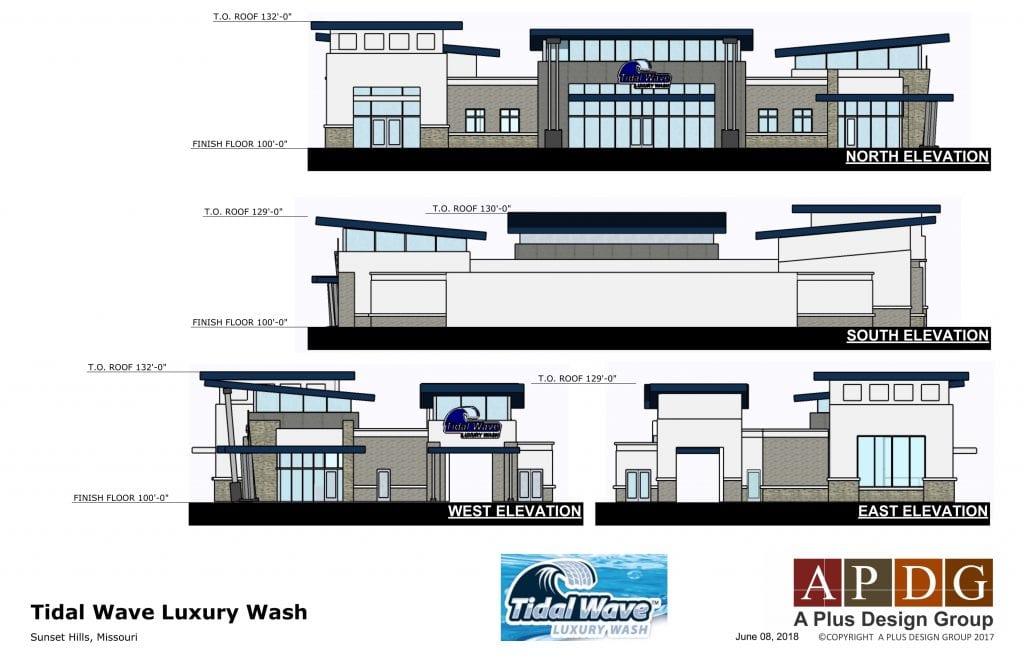 A rendering of the proposed Tidal Wave development at East Watson Road and Lindbergh Boulevard. Rendering courtesy of A Plus Design Group.

Whether they like it or not, residents along East Watson Road and Lindbergh Boulevard will have new neighbors after Sunset Hills officials voted last week to approve the construction of a Tidal Wave Luxury Car Wash on the site of the present-day derelict Econo Lodge.

Mayor Pat Fribis broke two 4-4 ties from the Board of Aldermen to approve the gas station and car wash, adding to a tense mood at City Hall during the finale of what had been a nearly three-month-long battle.

The bills approved the amended development plan and conditional-use permit for Tidal Wave to be built at 3720 S. Lindbergh Blvd., despite the opposition of neighbors.

“We are moving forward as a city,” said Fribis.  “I have anguished over this decision and have listened to my residents, and it is overwhelmingly approved.”

Under the original proposal, Tidal Wave — an all-in-one luxury car wash, convenience store, gas station and drive-thru restaurant — was open 24 hours, but it will now be open from 5 a.m. to 1 a.m. after the board approved an amendment.

Along with the full-service car wash and six gas pumps, the development will also include a drive-thru Smoothie King, a Kaldi’s Coffee and donut shop, as well as a “convenience market,” which the developer says would be more upscale than the average convenience store.

Brandon Harp from Civil Engineering Design Consultants originally presented the plan for Tidal Wave to the Planning and Zoning Commission in June. The panel voted 6-2 to recommend the proposal to the Board of Aldermen, where it faced criticism from both residents and some aldermen.

Divisions between residents and aldermen were on full display during the two-and-a-half-hour discussion Oct. 9.

“This area in my mind is pretty much the centerpiece of Sunset Hills,” said resident John Lieber. “I think waiting for some other type of project which would be a little more compatible with our city plan…would be much more preferable.”

But some aldermen were not willing to wait any longer to see the Econo Lodge go.

“I’m concerned that in five or six years, we’re going to be sitting here with that same building if this doesn’t get approved, and the same people are going to come up here and say, ‘Why haven’t you done something about this?’” Price said. “I for one am not willing to take a chance on it sitting there for the next five, six or seven years because some of us thought that maybe there could be some problems.”

“That building is a testament to man’s depravity,” Colombo said in reference to the Econo Lodge, and he would be glad to see it go.

Wong, an attorney who represents the area around the development, spent a majority of the discussion aggressively questioning Harp, operations manager Mace Nosovitch and traffic consultant Chris Beard on the methodology used to conduct a traffic study of East Watson and Lindbergh and the effect the Tidal Wave would have on existing traffic.

Wong said that Beard did not properly follow the Institute of Transportation Engineers Trip Generation Manual during the study of the possible Sunset Hills location, as well as an existing Tidal Wave location in Chesterfield.

“Are you familiar with the ITE handbook saying you need to study at least three sites?” said Wong, going on to claim that studies conducted on Fridays, as Beard’s traffic studies had been, could not yield accurate results since travel on Fridays is typically reduced.

“There’s a lot of factors in there that you’re missing because you’re not a car wash owner,” said Nosovitch at one point, clearly frustrated with Wong’s questioning. “So don’t talk about things you don’t know.”

Bersche also grew tired of Wong’s questioning, despite voting against the Tidal Wave development as well.

“Are you going to keep cross-examining these guys?” Bersche said.

Not all residents were upset about their upcoming new neighbors.

“While it may not be ideal to have another car wash, it’s a lot better than the Econo Lodge,” said Jeffrey Heveroh, founding partner of Stonebridge Financial Group, whose offices are behind the Econo Lodge.