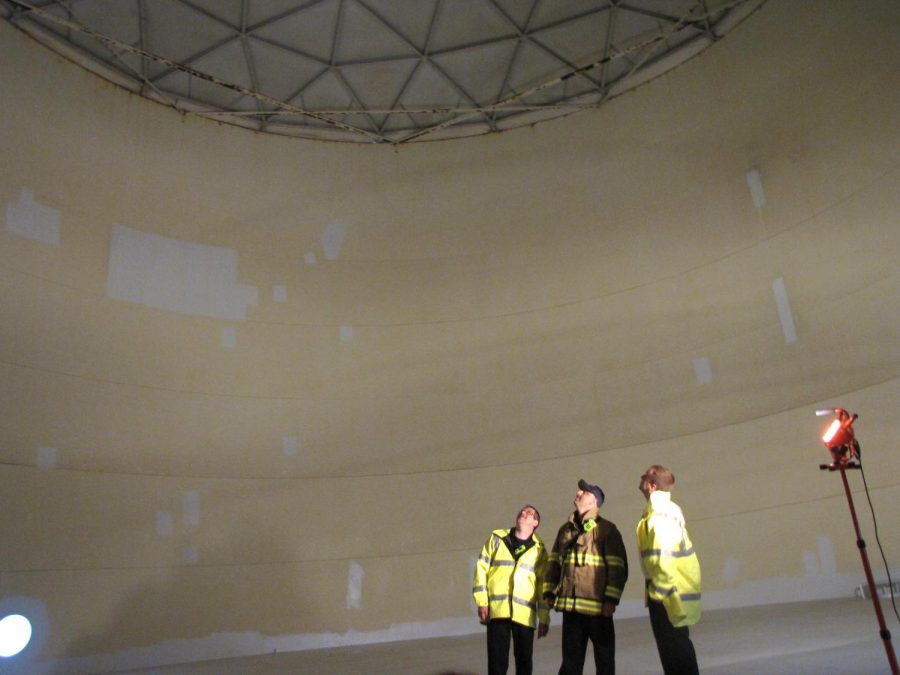 Affton firefighters tour the inside of a Missouri American Water tank at Tesson Ferry and Gravois roads in South County.

The Sunset Hills Board of Aldermen will hold a special meeting Tuesday about a new Missouri American Water tower the city rejected earlier this month. Neighbors are opposed to the tower, but the city attorney warned that the city could lose in a court battle over the water tower just as St. Charles County did in recent months. Missouri American Water said a decision has to come by the end of the month since that is the deadline for purchasing the property.

The special meeting, called by Mayor Pat Fribis, will be held by videoconference at 6 p.m. Tuesday, Jan. 26.

You can join the meeting via Zoom.com or by using the following link:

The board will review a conditional-use permit for Missouri American Water to replace a water tower on Sappington Barracks Road. The call for the special meeting comes after the aldermen rejected the CUP for Missouri American Water 4-3 at the petition’s second reading at the Jan. 12 regular meeting. Ward 1 Aldermen Ann McMunn and Joe Stewart, Ward 2 Alderman Casey Wong and Ward 3 Alderman Cathy Friedmann voted against the measure, while Ward 2 Alderman Steve Bersche and Ward 4 Aldermen Thompson Price and Mark Colombo were in favor. Ward 3 Alderman Nathan Lipe was absent.

Because Missouri American Water is a public entity, the city is limited in its ability to reject its permits, as long as the developments would not be harmful to residents or the city.

Missouri American Water is requesting the CUP to build an elevated, above-ground water tower at 11832 Sappington Barracks Road, north of the property already occupied by an older Missouri American water tower that was constructed in 1965 when water was still under the purview of St. Louis County. The new tower will be 105 feet tall with a radius of 82 feet, compared to the existing tower that is 95 feet tall with a 60-foot radius.

The property is zoned C-1 Commercial, as is the property to the north and west. The properties to the south of the proposed new tower are R-3 Single Family Residential.

The tower has come to “the end of its useful life” and needs to be replaced, Missouri American Water said.

At the Jan. 12 meeting, McMunn asked if it would be possible to see renderings and more detailed plans of the proposed tower before making a final decision, adding that she was concerned that the size of the new tower would obstruct the residents’ backyards.

“I don’t know if there’s a way to see what it’s going to look like before it’s erected because it’s massive,” said McMunn. “It’s going to be looming over their homes. Those … households will not see the light of day after noon.”

Angie Weigel, whose house on Crestwick Drive backs up to the water tower property, echoed McMunn’s sentiments and encouraged the aldermen to hold off on a final vote.

“I tried to look online to find final photos and there’s none online that I can find. I would like this to be delayed until we get more information as the residents,” said Weigel. “I have a pool and that is really concerning when I spend $80,000 on a pool and I don’t have sun in my backyard.”

The petition for the CUP was first heard by the Planning and Zoning Commission November last year. It was recommended with staff requests that the existing tower be demolished after the new one is constructed and that the company will improve the landscaping around the tower, install sidewalks along the driveway and add the city logo or name on the tower.

Public Works Director Bryson Baker told aldermen that some residents had spoken to the planning panel but that most were concerned with the landscaping, while some were concerned about the size. No residents spoke during the public hearing held by the Board of Aldermen in December.

Missouri American Water Senior Project Engineer Matt Jaspering told the board that the project was time-sensitive since they were trying to close on the property before the end of the month, and that the height of the water tower is dependent on making sure it supplied adequate water pressure to surrounding homes.

“I would ask that we don’t delay approval of this as it’s going to affect our ability to move forward with the purchase agreement of the property,” said Jaspering. “The height is pretty much set because that’s the height we need to give homes right around the tank adequate pressure.”

Missouri American Water’s planning department had looked into reducing the capacity of the tank, but the 1.5 million-gallon tank was already reduced from 1.75 million and the “planning department has told us that … is the correct side for the demand in the area for what we want to use it for,” Jaspering said. The current tank holds 250,000 gallons.

City Attorney Robert E. Jones cautioned that the city was limited in the rules it could impose against a public utility.

“Missouri American Water Company is a public utility, and the ability of Sunset Hills to impose zoning regulations on another public entity is limited. They have demonstrated through the testimony tonight on the record the necessity for this particular facility,” said Jones. “While the city of Sunset Hills can impose its health and safety regulations on a public entity, we are limited into what we can do in regard to zoning.”

“St. Charles County is a charter county, so it has a greater ability to impose zoning regulations than Sunset Hills has as a fourth-class city,” said Jones. “I just think it’s a slippery slope for the city of Sunset Hulls when we try to quarrel with their location and their desire to built this particular structure … for all the reasons the representatives for Missouri American Water have stated. It would be very difficult to impose zoning authority and reject this particular plan.”

The petition ultimately failed to pass, with aldermen voting 4-3 against the CUP.

“Well, you just got your St. Charles situation,” said Colombo after the vote.

The board will discuss further options with Missouri American Water at the meeting Tuesday night, ahead of the deadline for the utility company to purchase the property before the end of the month.

“I’d like to take the time to weed it out and see if there’s any other options,” said McMunn.