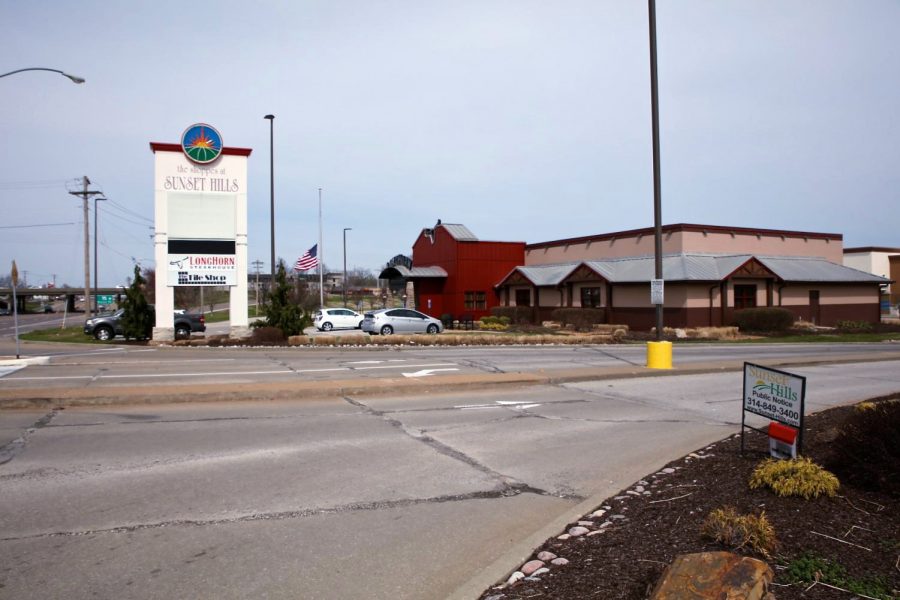 The Shoppes at Sunset Hills has an 81-percent vacancy rate after the anchor tenant, Toys "R" Us, shuttered in 2018, followed by Ross Dress for Less in early 2021. The Tile Shop and an outparcel that is occupied by a Longhorn Steakhouse are the only businesses that remain in the shopping center.

Sunset Hills is one step closer to getting a grocery store again, with tax incentives approved for an unnamed developer new to St. Louis that appears to be Amazon.

A petition that would establish the Shoppes at Sunset Hills Community Improvement District to fund a new grocery development at the former Toys “R” Us, 3600 S. Lindbergh, was unanimously approved by the Board of Aldermen 8-0 March 23.

The 40-year CID will impose a 1-percent sales tax at the location, which was also the site of Ross Dress for Less until it closed earlier this year. Revenue from the sales tax will be used to reimburse about $5.4 million in CID-eligible costs to redevelop the anchor building for new tenants. The grocery tenant would generate a projected $30 million in revenue and $450,000 in new sales taxes for the city during the first year of operation.

Developers have declined to reveal the name of the grocery store, but said it is “new to the market.” That appears to fit the profile of the new “Amazon Fresh” grocery stores.

Amazon has had a test store in Seattle for the past several years, but the first official store opened in an affluent Los Angeles suburb last year. In addition to stores in California, Amazon Fresh has since opened physical storefronts in suburban Chicago and is now up to 11 Fresh stores.

Multiple media outlets have also reported that Amazon has over two dozen other Amazon Fresh locations in the works for this year, including locations in Washington state and Pennsylvania.

Most tellingly, the company has been using vacant stores rather than building new developments — and has been focusing on reusing old Toys “R” Us stores.

The shopping center was built in 1997 and consists of two parts: The 92,074-square-foot building that currently houses The Tile Shop and the former Toys “R” Us and Ross, as well as a 5,500-square-foot outparcel occupied by a LongHorn Steakhouse.

“The last grocery store we had in our community was Rock Bottom — and that was probably over 30 years ago because I remember shopping there when my children were very young, and my children are all grown up with families of their own now,” said Mayor Pat Fribis prior to final passage of the CID bill. “This is our opportunity that has taken 30 years, so please keep that in mind … and vote accordingly.”

Until this grocery store proposal, the Toys “R” Us had not had any offers in the three years since the chain shut down all its stores. Although the Ross closed just this year, the center has been marketed at an 80-percent vacancy for the last three years because of a co-tenancy agreement from Ross that meant it would leave the location without Toys “R” Us as a co-anchor.

The approval of the CID does not automatically ensure that a grocery store will come to the city, since a lease agreement is still being worked out with the developer, property owner Sansone Group, and the prospective tenants.

City Attorney Robert E. Jones said that if Sansone is unable to produce a grocery store tenant, the CID will automatically terminate if the board does not approve some kind of substitute.

“The developer still needs to complete his lease negotiations. … But no one is sitting here tonight saying with 100 percent certainty that if you pass this ordinance there will be a grocery store, because there’s not a signed lease agreement yet,” said GilmoreBell attorney Mark Grimm, legal counsel for the city on the project. “They are quite optimistic if the board takes this action tonight then it will result in a grocery store. … I can also say with certainty that there will be no Community Improvement District and no CID sales tax if there’s not a grocery store.”

The redevelopment proposal itself calls for using the Missouri CID Act to redevelop the anchor building for new tenants by converting the Toys “R” Us into a 37,000-square-foot space for a user to occupy by 2022. That’s down from the more than 90,000 feet of the building now.

“If this CID does not pass, we have no shot at getting this deal done. It does not make economic sense (to redevelop without the CID), which is why we are here tonight,” said Sansone representative Mark Kornfeld. “The tenant is closely monitoring this. We have to get this across the finish line or they’re gonna move on down the road. We’re one of numerous deals across the country that are being looked at.”

Ward 1 Alderman Ann McMunn questioned if shoppers would have to continue to pay the CID sales tax in the shopping center even in the event the main tenant closes before the 40 years is up.

“Will we as consumers continue to pay on this for the next 30 years if the grocer closes in 10 years?” she questioned.

Grimm said that the CID sales tax would remain in place until all redevelopment costs are recouped, even in the event that the tenant chooses not to renew a lease. Typical lease lengths are 10 to 20 years.

Ward 3 Alderman Cathy Friedmann offered an amendment to the proposal that would “tighten up” the ordinance by requiring the CID to dissolve in the event that the tenant does not renew the lease.

“If the grocery store goes away, the CID goes away. It’s tying those two together,” said Friedmann.

“I think that legally that could be done. … I think the concern … I have from the city standpoint … is what if there’s a temporary closure from COVID for instance? What if there’s a fire or some other catastrophic event that causes closure for three months or six months?” said Grimm. “While I think legally the board could insert that language … I think it raises some questions.”

Friedmann’s amendment ultimately failed by a 6-2 vote, with McMunn and Friedmann in favor and the rest of the board opposed.

“As a board we need to be very careful in the sorts of restrictions you’re trying to put onto future partners of ours. As I look at it, I don’t know any time I ever worked on development … and different applications I’ve been involved in where we sat around talking about the what if’s,” said Ward 4 Alderman Thompson Price. “If you’re concerned about the CID … if a business is no longer working there, they aren’t getting any money. The people coming there aren’t paying any money if it’s closed. … I think we start getting muddled down in minutiae for absolutely no reason.”

In the end, all aldermen voted in favor of the proposal.