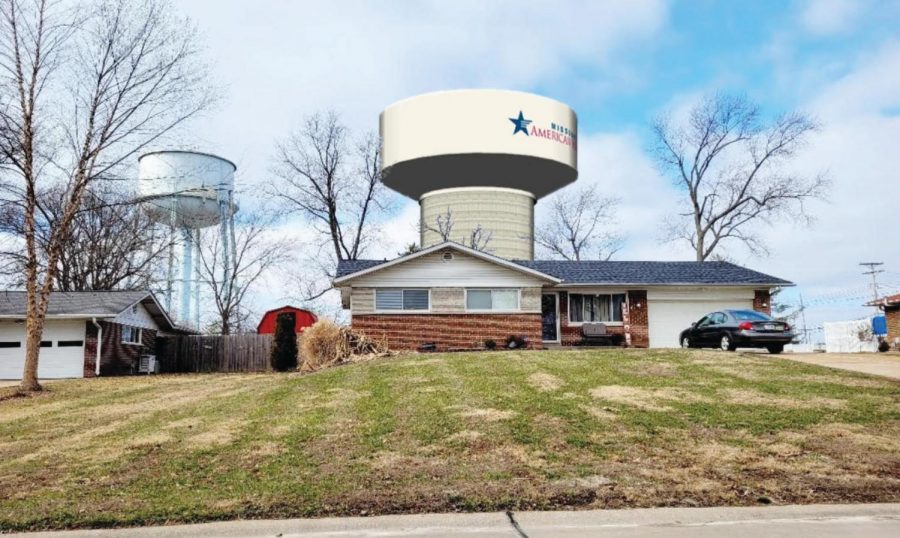 This rendering from Missouri American Water shows what the new tower would look like from Crestwick Drive.

Sunset Hills Board of Aldermen passed a motion Aug. 10 to deny sending a rendering of the city logo to Missouri American Water Company for use on the contentious water tower.

Aldermen felt Missouri American was jumping the gun considering the plan for the tower has not been fully approved.

Ward 4 Alderman Fred Daues said if staff were to send the logo it would look like the city was in favor of the water tower to anyone seeing a rendering.

“The only motivation I can find that they want this logo is a term I would call tacit approval. If we send them our logo, I guess we’re for the tower, or why would we send them the logo?” Daues said. “The last thing that’s going to happen is painting the tower.”

City Attorney Robert Jones said the city’s conditional use permit requires the logo be sent to Missouri American, so an official motion would have to be passed to counter that point. Jones said the issue is not one of copyright infringement, so the water company can get the logo any way it pleases, such as from the Internet, but the city would have the best rendering.

Ward 2 Alderman Christine Lieber said giving the logo would be like “putting the cart before the horse.”

Missouri American Water submitted the plans for the water tower to the Department of Natural Resources for review in July. Ward 3 Alderman Cathy Friedmann read a letter submitted by resident Angie Weigel, who lives next to the proposed tower, outlining the department’s questions regarding the plans.

“The Missouri Department of Natural Resources has kicked this back to Missouri American Water for a revised geotechnical analysis with updated modeling reflecting current dimensions of the water tank,” Friedmann said. “They asked for information about the distance of the tower to the closest resident, business, public road or parking lot. … They don’t know if the soil will work, so it’s kind of early to be shooting a logo over.”