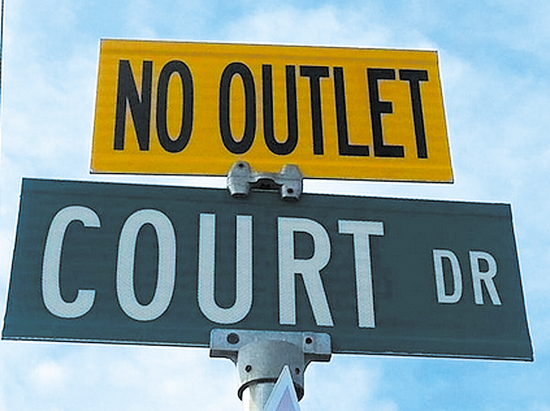 A representative of a developer hoping to commercialize Court Drive in Sunset Hills made a final plea to the Board of Aldermen last week to approve the zoning at the site that will bring the highest return to property owners.
Des Peres physician Dr. George Despotis and the other property owners who make up the “alliance” hope to commercially develop tornado-ravaged Court Drive. They seek to build a subdivision of 15 attached villas along Court Drive and rezone the corner of Lindbergh and West Watson as commercial for a credit union.
Despite the wishes of current Court Drive residents, the alliance does not want to build single-family houses on the property it owns because “we don’t feel that would generate the same dollar amount as this,” said Jim Hall of Hall + Associates, who represented the alliance to aldermen at the Sept. 12 meeting.
“So that’s the bottom line, it’s money,” Ward 1 Alderman Dee Baebler said.
Although aldermen fast-tracked most of the bills they considered at last week’s meeting, they chose to leave the Court Drive development at just a first reading and take a final vote when they next meet on Tuesday, Oct. 10.
Despotis has contracts on properties of residents whose houses were leveled in the tornado, including Paul and Karen Cardwell, Harlan and Catherine Gast, Randy Gast and Lawrence and Janet Gnojewski.
The alliance’s latest plan was unanimously rejected by the Planning and Zoning Commission last month, which means it would have to garner the support of a supermajority of aldermen to be approved.
As during past city meetings discussing Court Drive, a court reporter was on hand to take transcripts of the board meeting for the alliance in case it takes its fight against the city to court, a threat Despotis and his representatives have made many times.
His commercial plans have been rejected by every alderman and most of the planning panel at every opportunity since 2011, most recently in March. Planning and Zoning Commission members insisted last year that Court Drive be recommended as residential in the city’s new comprehensive plan.
The latest plan for 15 attached villas on 2.46 acres is similar to the plan for 20 villas on roughly 4 acres proposed last year by Despotis and home builder Pulte Group, which dropped the plans when it pulled out of the St. Louis market in May.
But unlike the Pulte proposal, the latest incarnation cuts off the new development at Court Drive. Like the other plan, however, the new plan still relies on the new villas lining an extension from West Watson Road to Court Drive that would have to be approved by Court Drive residents, who own the private street.
“They can’t put a street onto our private road without our OK,” Court Drive resident Gerald Kovach said. “The doctor wants to cram 15 row houses on less than 2.5 acres.  The old and new comprehensive plan ensures the area remains residential. Are there any questions?”
Kovach was one of two Court Drive neighbors who spoke out against the development, along with Friends of Court Drive organizer Ann McMunn.
The neighbors have said they know of private developers hoping to buy the lots in question to build single-family houses, which have increased in demand due to the popularity of Lindbergh Schools. At least one of those developers already owns property on Court Drive.
But that is not a route Despotis and the alliance are willing to take, Hall said.
“We did not feel that 20,000-square-foot lots with single-family homes at a signalized intersection was the highest and best use,” Hall said.
Instead, the attached villas Despotis hopes to build would have lots ranging from 3,400 square feet to 5,800 square feet.
Since Pulte left St. Louis, the alliance has struggled to find another residential developer to partner with, Hall said. The two other major homebuilders in the region have questioned whether trying to develop Court Drive would take too long.
But although the latest requested zoning for the West Watson corner is for generic commercial zoning and not a credit union in particular, the group may still be partnering with its original announced tenant, First Community Credit Union, Hall said.
The credit union still has a letter of understanding with the alliance, but “they’re not sure if they can wait long enough,” Hall said.

Hall pointed to the existing commercial development and strip mall across South Lindbergh Boulevard, including an existing bank, as reason enough to allow commercial on the corner lot near Court Drive.

However, board President Richard Gau said that the plan would wedge two of the attached villas in between the new commercial corner and the existing commercial lot next to Telle Tire, which currently only has the foundation of the MRI center destroyed in the tornado.

“There would be two residential homes sandwiched in between,” Gau said. “It seems to me that would not be compatible with the surrounding uses.”