Kostial clashes with board over FaceTime attendance 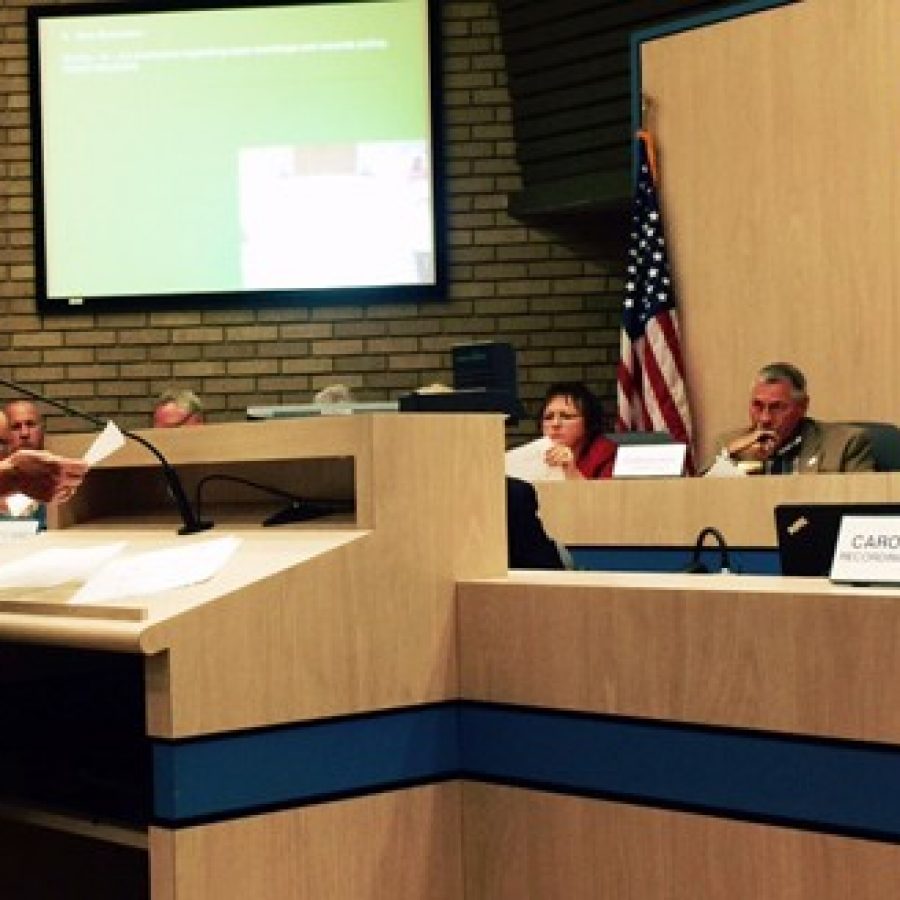 Under new rules up for final approval at the Sunset Hills Board of Aldermen next week, aldermen would be limited in how many times they can attend city meetings by videoconferencing.

Videoconferencing has been a contentious topic at city meetings this year because Ward 3 Alderman Keith Kostial has a work assignment that frequently takes him to Wisconsin. Since December, Kostial has attended six Board of Aldermen meetings by video and five in person.

Over Kostial’s objections, the board gave preliminary approval June 14 to videoconferencing limits based on recommendations from the Missouri Municipal League. Under the new rules, aldermen could videoconference “only sparingly,” up to three times in a rolling 12-month period, unless otherwise approved by the board.

The bill encourages a physical quorum except in emergencies.

The board will consider final approval of the legislation when it meets at 7 p.m. Tuesday, July 12, at City Hall, 3939 S. Lindbergh Blvd.

Kostial, whose Wisconsin work commitment lasts through December, submitted his own version of the bill to aldermen that takes out the three-meeting limit and specifies that aldermen can use video not just in an emergency but for personal reasons. He asked for the issue to be tabled since his alternate bill was not also on the agenda.

From the beginning of the debate, City Attorney Robert E. Jones has said that while the city could not ban video voting, it could limit it. However, Kostial contends that as a fourth-class city, Sunset Hills cannot restrict anything beyond state law.

In an email to the Call, Kostial said, “Videoconferencing remains LEGAL without limits.”

The legislation allows FaceTime as a video, although Mayor Pat Fribis and some aldermen oppose its use.

“It’s not the city of (board President) Rich Gau or the city of Pat Fribis — it’s Sunset Hills, Missouri, so we have to follow Missouri law,” Kostial said.

Public Works Director Bryson Baker sought cost proposals for cameras to ensure that a video-calling alderman could see and hear everything in the chambers. The lowest estimate was $27,000, with no new screens.

At a May 24 work session, Kostial attended by FaceTime through Jones’ iPad, propped up on the podium facing the audience, and objected to any money being spent on videoconferencing. Kostial physically attended the June 14 meeting and demonstrated how residents could see him on a television the city already owns.

“Pat, when you first got a new car, did you get a new Mercedes?” he asked Fribis. “People would rather crush ideas instead of bring solutions.”

Kostial maintains that there is nothing he can do at Sunset Hills meetings that he can’t do through FaceTime. He even stands for the Pledge of Allegiance, just as he would if he was in the city.

But Ward 4 Alderman Thompson Price told Kostial that some of the commitments elected officials make to voters are non-negotiable, including physically showing up for the job.

“We have an obligation to be here,” Price said. “I don’t have a problem if you’re gone once or twice, something comes up, but I do have a problem if you’re not fulfilling your obligation as an alderman — which means being here, seeing each other, body language that you would never see on a videoconference, I think that’s huge … And if you can’t be here, then maybe you’ll have to move on and let somebody else fulfill that position.”

Kostial’s fellow Ward 3 Alderman Kurt Krueger asked if the city could make any accommodations so that Kostial could personally attend meetings, including changing the meeting day. He also wondered if Kostial could use his “outside-the-box thinking” to teleconference to his job two days a month “so your city gets your devoted effort” and “so that we don’t have this disruption, or additional costs, or lack of personal contact and body language/visuals.”

Most aldermen have said the poor sound and audio from Kostial’s video link has distracted them during city meetings, and the work session was interrupted by high-pitched feedback at least five times.

In an email, Kostial wrote, “With the completion of each videoconference we have had greater success, all at no extra cost to the city. Unfortunately, other aldermen have not had interest in contributing to any new workaround ideas or testing.”

But other interruptions have taken city officials by surprise. Typically, Jones looks up ordinances on his iPad at city meetings. Late in the work session, Kostial questioned Jones on some legal specifics.

“Unfortunately I don’t have my iPad because it’s being used,” Jones replied.

At one point, the iPad suddenly went black. When Kostial returned onscreen, he was standing up.

“I’ve arranged my body so you can see my torso and my body language,” he told aldermen, who couldn’t see him because the iPad was facing the audience.

At the work session, Kostial repeatedly said aldermen missed multiple meetings without calling in. Each alderman, however, said they have never missed more than a few.

Turning to Fribis, Kostial asked, “How about Jan Hoffmann, Citizen of the Year, one of your best friends, she’s missed like five meetings in a year … You’re fine with that. Just skip meetings and forget about it, right?”

At the next meeting, Hoffmann told her successor, “I don’t appreciate you attacking my attendance record with lies, Alderman Kostial.”

Records show that Hoffmann missed one or two meetings a year leading up to 2011, when she missed three meetings. She had to miss one meeting because she was in the hospital in Belgium after breaking her hip overseas. She missed another meeting for surgery, but came to the next meeting with a walker against doctor’s orders so she wouldn’t miss three in a row.

Kostial explained that when he requested Hoffmann’s attendance, the city gave him inaccurate records.

“If I received misinformation and I quoted that information, then I apologize,” Kostial said. “If information’s not scrubbed, it’s not my fault. I don’t have access to your personal calendar, Jan.”

“I appreciate your apology — that seemed to be very important to you, you were hammering on it again and again in that work session,” Hoffmann said. “The thing is, it’s damaging to my reputation.”

In an email to the Call, Kostial followed up, “A citizen told me they were puzzled why Jan did not apologize to me, but carried on even after knowing I only stated the facts that the city provided me.”