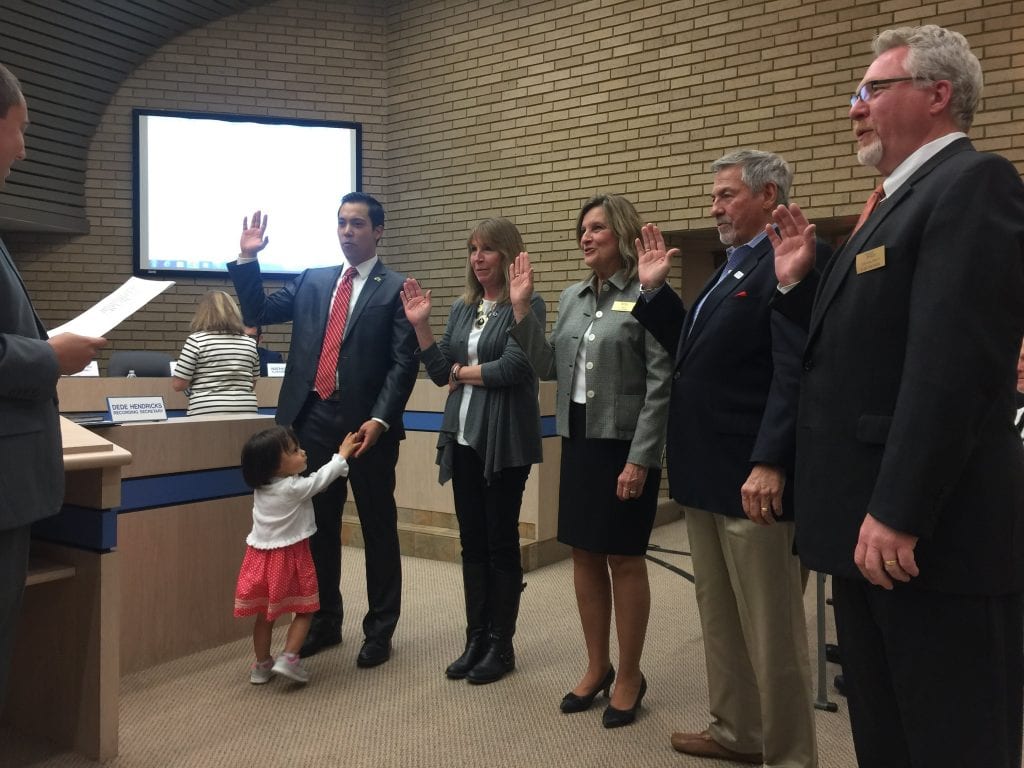 From left, Casey Wong, Ann McMunn, Thompson Price and Kurt Krueger are sworn onto the Sunset Hills Board of Aldermen, with Mayor Pat Fribis also being sworn in, center.

A Sunset Hills alderman is disputing the city attorney’s ruling that text messages sent by Mayor Pat Fribis did not violate the city’s new ethics ordinance.

Under the city’s ethics legislation, which was passed by a majority of the Board of Aldermen in January, a city official can file a complaint against another city official for perceived ethics violations, including threatening or intimidating behavior. The ethics complaint is the first one ever filed under the new ordinance, said City Administrator Eric Sterman.

Under the legislation, the city attorney decides if an ethics complaint has merit and whether it will be heard by a hearing officer in a hearing by the full Board of Aldermen. In this case, City Attorney Robert E. Jones ruled May 20 that the text messages were not a violation of the ethics law and that they did not constitute a threat because they did not appear to be intended as a threat by Fribis, since a longer text thread provided by the mayor included emojis that made it seem that McMunn did not take the message as threatening at the time. But McMunn responded to the city attorney that she still sees the text messages as a threat.

McMunn and the neighbor live on Court Drive, the tornado-ravaged street which has spurred a long-running contentious debate in the city. Developer George Despotis is suing the city to redevelop part of the street for a commercial business over city officials’ objections.In her complaint, she wrote of Court Drive, “It is no secret that I take this particular issue very seriously. For the Mayor to threaten ‘let it go commercial’ in retaliation over a neighbor displaying an opponent’s campaign sign in their yard, was very unsettling to me, both personally and professionally.

“I believe intimidating or threatening voters, or other elected officials, to garner support for a political campaign is questionable, if not unethical, and should be addressed in accordance with the newly adopted Ethics Ordinance….”

Fribis texted McMunn at 9:41 p.m. Feb. 2, “I was shocked to see a John Stephens sign in one of your new neighbors on West Watson. I have been fighting for residential there and sat through all of Despotis’ depositions. Many of the BOA wanted to settle and put a bank there but I threatened a veto. I can withdraw my objections it can go commercial.”

McMunn replied back at 10:47 p.m. that night, “I don’t know who you’re speaking of… I’ve been out of town all week. I’m sorry but your comment sounds a bit like a threat on something which I know nothing about~”

Fribis texted back the next morning, “Not a threat at all. Just frustrated because I have been fighting to keep it residential.”

But Jones said that the text messages were not “legally sufficient” to amount to either a threat or an ethics violation.

In response, McMunn objected that she did feel threatened by the text messages.

“Respectfully, I dispute your findings,” McMunn wrote to Jones, taking issue with how he came to the conclusion that the messages did not merit being heard by the full Board of Aldermen.

“I feel that I was threatened and feel further insulted by this answer,” McMunn said in an email to Jones. “This is not ethical behavior, which was the reason originally cited for drafting such an ordinance.”

To make his decision, Jones used other text messages sent to him by Fribis and even emojis exchanged between the city officials to decide the tone of their written communications. Nearly two weeks after the initial exchange, on Valentine’s Day, Fribis wished McMunn a happy birthday with emojis, and McMunn replied, “Happy Valentine’s Day to you and Phil~,” followed by a heart emoji, referring to Fribis’ husband, Phil Denton.

“Thank you,” Fribis texted back. “The same to you!<3” with another heart emoji.

In McMunn’s email to Jones, the alderman said the text thread handed over by Fribis was “misleading” because it did not have message dates on it, and she said that Jones hadn’t realized as he made his ruling that the messages she saw as threatening came two weeks before the Valentine’s Day texts.

The texts with emojis “occurred two weeks later, were not related to city business, and have no connection to the threatening text of February 2nd,” McMunn told Jones. “They were on my birthday which happens to fall on Valentine’s Day.  You will notice the texts on February 15th, the Mayor is back to chiding me about signs on W. Watson in … yards.”

McMunn also took issue with how the city handled the complaint and whether it followed the guidelines of the ethics law passed in January. She said that the city attorney should only decide whether the complaint should be heard by the full board, not whether it had any merit: “The City Attorney is not to make factual judgments as to motivations, actions or any factual determinations.  This is for the Board of Aldermen to determine.  The City Attorney only determines ‘legal sufficiency’ of the Complaint.  This means whether the complaint is in proper legal form in accordance with the code.  My Complaint is in proper legal form and is legally sufficient under the code.  Therefore, I ask that the City Administrator appoint an impartial hearing officer, not associated with the city or with the City Attorney’s law firm, to determine if probable cause of the violations exist.”

In an email to McMunn, Jones wrote, “Ann, I am sorry but I must respectfully disagree with your characterization of the role of the city attorney with respect to an ethics complaint. I appreciate the clarification on the timing of the text thread. Without dates, it was not entirely clear. However, this does not change the tone or direction of the Mayor’s texts which were not threatening or harassing toward you.”

In a second reply to Jones, McMunn gave what she said was the background of the exchange. Although she has thought of Fribis as a friend and in the past had supported Fribis’ campaigns, she chose to sit this one out and had told Fribis she would do that.

“I do believe she felt ‘frustrated’ to see her opponent’s signs in neighboring yards. I also think she presumed I had had some influence over this – whether I had helped get the signs erected or could help to have them removed/replaced,” McMunn wrote. “So I do believe that the intent of her text, when sent, was to intimidate me, and in turn my neighbors. Based on earlier actions or inaction, I had no reason to trust otherwise. Just because later she says it was not a threat, does not just make it so or that it was not taken as such.

“I filed because, not only had I felt intimidated by Pat’s behavior, I fear that perhaps others may have experienced the same.  I had seen signs go up, I had seen some replaced and others removed completely through the earlier days of the campaign. Also, I was elected to be a voice for the residents to preserve the residential integrity of our community. I feel a special obligation to those who so actively supported my campaign and our neighborhood initiative. I work for them. Had I remained silent and Pat have an opportunity to exercise her threat, I would have felt that I had let these residents down.”

The Board of Aldermen unanimously approved keeping Jones as city attorney at the May 12 meeting, before the complaint was filed.

McMunn wrote to Jones, “I understand the awkward position you have been placed in – to make a judgment call on the very person/entity who employs you and pays your salary.  It would be difficult for anyone of us to review a claim of this nature without bias. It was one of the reasons that I felt that the Ethics Ordinance itself was flawed from the start and voted against its implementation.”

McMunn continued, “… If garnering campaign support through threatening or even questionable tactics is not considered unethical, and to have the chance of referral to an unbiased third party to review is denied, what is the actual purpose or the true effectiveness of this Ordinance?”

Fribis said she was surprised that McMunn filed the complaint, both because of the length of time between the February texts and the eventual complaint and because McMunn didn’t seem to be bothered by the message at the time. They talked on the phone the next day.

“I was surprised Ann McMunn did that,” Fribis said. “There was no threat whatsoever… Three months went by and I even called her the next day and I said Ann, I would never threaten anybody, you know me, I’m just frustrated.”

Describing McMunn’s reaction at the time, Fribis said, “She understood and we laughed it off… After I talked to her on the phone, we were friends again.”

Besides exchanging the birthday and Valentine’s Day messages a few weeks later, Fribis said McMunn and other aldermen went out to eat with her after the March Board of Aldermen meeting, long after the text messages. Things seemed normal at that dinner, with McMunn “cordial and talking and friendly,” Fribis said.

Besides the election itself, Fribis said she doesn’t know of any event that happened between now and then that would have prompted McMunn to file the complaint.

1. “The statements are observations, not threats.” Whether Fribis would be in a position to ever veto any vote by the Board of Aldermen would depend on the aldermen, “not the Mayor’s own conduct.”

2. Fribis’ statement was not directed at McMunn, but at her neighbor: “No action is requested of Alderman McMunn or of the neighbor displaying the sign.”

3. “When Alderman McMunn states that she feels threatened, the Mayor responds that no threat is intended. There are additional texts which contain emojis, suggesting that the text thread was not intended to be harassing and was not ultimately considered by the recipient to be harassment.”

Jones went on to say that he recommended “no further action” on the complaint.

Read the complaint below, along with Jones’ response:

And here’s the response from Jones: