Subdivision will be built in Affton cemetery

Developer held a town hall in January to discuss plan 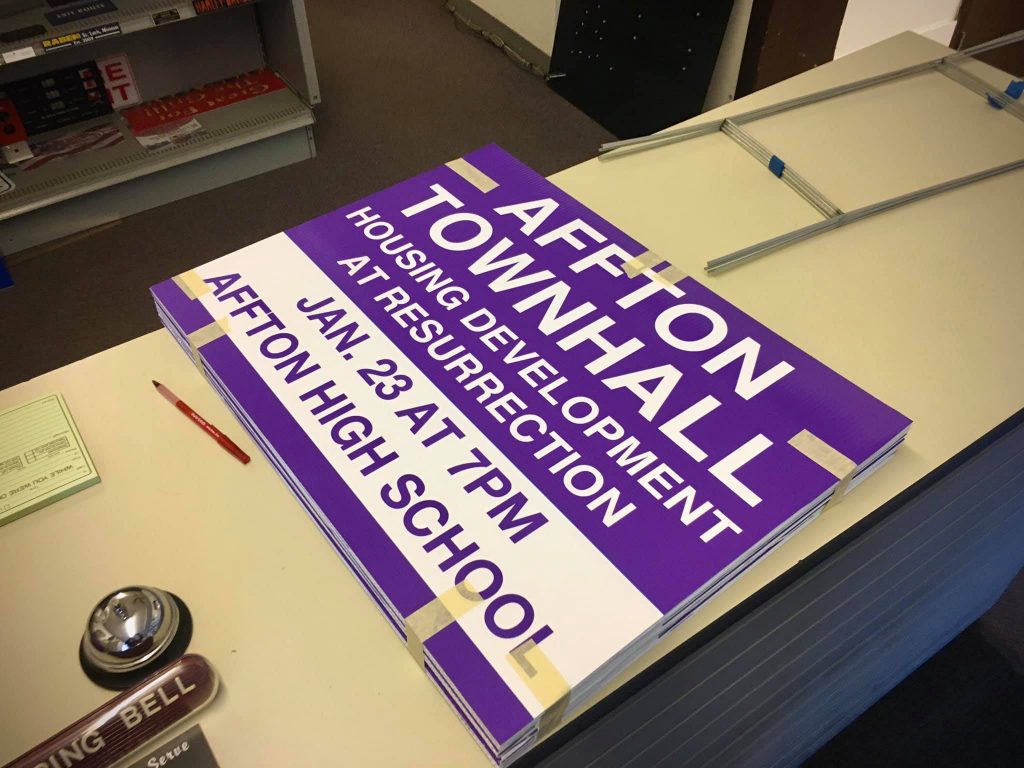 A plan to turn unused land in Resurrection Cemetery in Affton into a 199-home subdivision called “The Preserve” will add larger housing options to a part of South County known for its small brick houses, after the St. Louis County Council approved the project this fall.

The Preserve did not see the strong opposition from neighbors that typically marks the introduction of a new subdivision in South County.

Instead, the feedback at a town hall and public hearing on the subdivision was mostly positive, with a few exceptions.

McKelvey Homes promises to turn 20 of the 69 acres into a nature preserve with hiking trails and wildlife friendly features that will be open to the public.

The Catholic Cemeteries division of the St. Louis Archdiocese owns the property and is selling it to McKelvey Homes, the building developer. The archdiocese had to get permission from the Vatican to sell the property.

The property borders the Tower Tee property that was also targeted for development by another home builder, McBride & Son, until an Affton native, Steve Walkenbach, and Lindbergh Board of Education President Mike Shamia bought it last year to redevelop into a new Tower Tee (see Page 12A). Unlike the vehement opposition that any possible subdivision at Tower Tee received at a series of town halls and countless County Council meetings for more than a year, the Resurrection Cemetery development saw scant opposition in comparison.

Supporters of the new homes said at a videoconferenced public hearing in June that Affton needs more diversity in housing stock to attract growing families. But out of the 130 participants in the hearing, only four spoke in opposition. Of those who attended the hearing, 42 said they favored the subdivision and nine said they opposed it.

McKelvey Homes President Jim Brennan and Jim Hall of Hall and Associates presented the plan at the public hearing and at an earlier town hall held by McKelvey at Affton High School in January. A few changes were made in between in response to concerns by neighbors.

McKelvey and Payne Family Homes sought R-3 residential zoning, which the developers said will be “excellent transition zoning” from the neighboring R-5 residential zoning to the NU Non-Urban property across Mackenzie Creek.

If the site matched that same zoning, McKelvey could have built 353 houses on the 69 acres, the developer said.

“While that may seem like a very attractive goal to shoot for, that wasn’t what we wanted to do with the property and it certainly wasn’t what the Archdiocese had in mind,” Hall said.

Instead, the developer is turning the current forested land into “The Preserve,” with the existing trees kept in as many bordering areas as possible. A primary idea behind the development was to “save as many trees” as possible, Hall told the Planning Commission. The entire perimeter will have an undisturbed area between 20 and 40 feet wide.

Brennan projects that the new houses built on previously unused nonprofit land will add $1.4 million to tax rolls, with nearly $800,000 of that going to the Affton School District and potentially more than $200,000 to the Affton Fire Protection District. Construction is projected to create more than 600 full-time jobs.

Existing houses in the Mackenzie Gardens and Pebble Hill subdivisions border the cemetery land slated for the subdivision.

In comparison, Hall said Mackenzie Gardens has 201 single-family homes, which would equate to 5.1 units an acre with no common ground.

Instead of the 353 that the developer could have built with that zoning, it asked for 199 houses, with the possibility of another nine if two existing cell towers are taken out or moved elsewhere.

The 199 houses will be divided among four areas, each with a different type of house from villas to more luxurious — the Villages, the Glen, the Manors and the Estates, in order of size of lots. All the houses would be detached single-family houses, with no attached houses proposed.

In all, that would be 2.9 houses per acre, compared to the neighboring zoning of 5.1 per acre.

Listening to suggestions made by residents at the Affton High School meeting in January, McKelvey is adding a new storm sewer pipe between some of its houses and neighbors that should solve an existing stormwater problem the neighbors have. The neighbors asked for that instead of extra landscaping.

In all, 18 of the 69 acres would be common ground, more than 25 percent of the total land. The Preserve’s common ground will feature hiking trails, two stocked lakes and internal trails that will connect sidewalks across the subdivision to link houses together.

“We’re not just going to be building homes for people,” Brennan said, listing the many options animal residents will have with birdhouses, insect hotels, bat houses and butterfly bushes and houses in the new preserve. “We really embrace the name of Preserve, so we’re trying to not only preserve what’s there but also improve it. … We’re going to try to build upon that and really make this a beautiful natural setting.”

The houses will be larger than the brick houses that line most of Affton now, with open floor plans, more storage and many single-story options because “we know how South County is, they love their ranches in South County,” Brennan said.

Current Affton fire board member and former Affton Board of Education member Robert Hehmeyer said he sees the subdivision as a solution to the problem of growing families moving away because they can’t find a large enough house to buy.

“When this was first talked about, the excitement in the (fire) board room was unbelievable,” Hehmeyer said. “I’ve seen businesses die over the years because we lost businesses as our population aged.”

But Margaret Marnati said she opposed it due to an increase in traffic: “I’ve been listening and it’s been like a commercial for The Preserve. I’m not in favor of it.”