Stenger makes the case to voters in his re-election bid 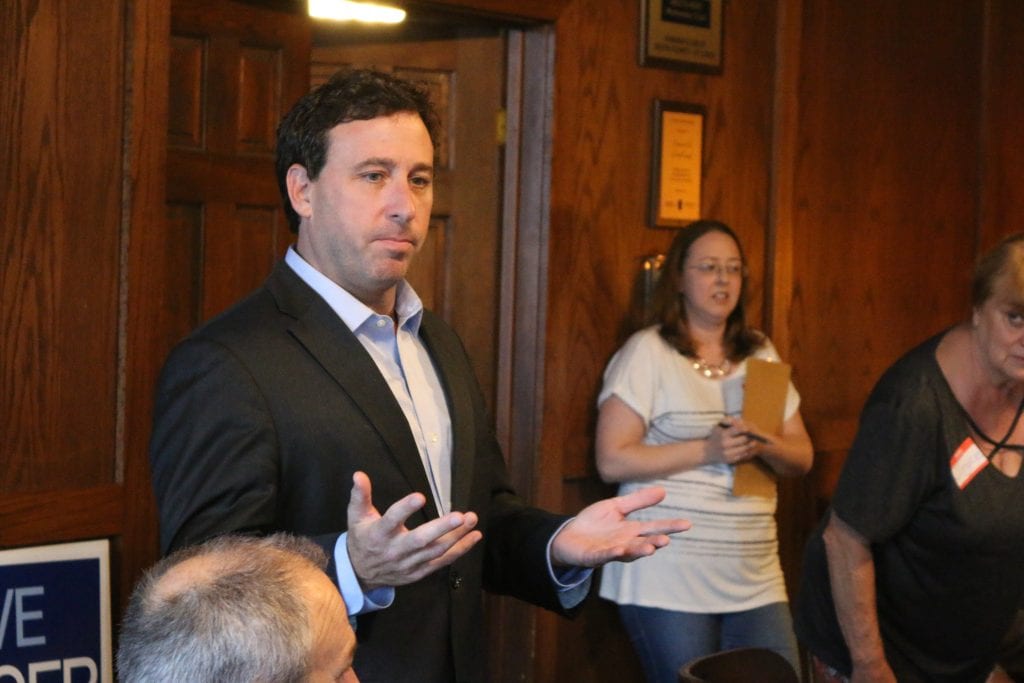 With less than a month to go before the Democratic primary showdown for county executive, incumbent County Executive Steve Stenger and his opponent are making their final pitches to voters.

Both candidates made appearances in front of supportive audiences in south county within days of each other last month. They talked about their opposing takes on Stenger’s time in office, with Stenger saying he feels he’s accomplished what others might accomplish in two terms and Mantovani declaring Stenger’s four years in office a complete failure.

At that forum, Mantovani declared Stenger “missing in action” for not showing up and sending county Communications Director Cordell Whitlock to represent him.

But across town at the Tesson Ferry Democrats, Stenger was touting his time in office as bringing jobs and investment to the county.

“It’s great to be in south county, great to be where we all started — I was the county councilman for this area, as you all know, for six years,” Stenger said. “I really don’t have a stump speech that I give, I just kind of talk to people and talk about what we’ve been doing for the last three-and-a-half years.”

Serving as the 6th District council member is more than a full-time job, but serving as county executive is more like three full-time jobs, Stenger said.

“It’s countless hours of work, and it’s very rewarding because you’re able to make a huge impact on our region,” Stenger said, noting that with his background as a certified public accountant, or CPA, and an attorney, he was able to easily work with budgets and find cost savings including $300 million saved in future pension costs. “And then there’s a real humanitarian side to this job, where it’s not all about dollars and cents, it’s about making an impact on your community and on people’s lives.”

Throughout the night, he alluded to his current stalemate with much of the County Council, where in a change of pace from the past, he only has one consistent ally, 5th District Councilman Pat Dolan, D-Richmond Heights.

“And I think one of the keys and one of the most important parts of public service is to figure out how to get around that obstruction so you’re moving forward.”

“All of these things put our workers to work and they bring jobs into our region,”

Days before Stenger unveiled a far-reaching opioid initiative (see article on Page 1A), he kept mum on those latest plans to the Tesson Ferry group but said his accomplishments up to that point on preventing opioid abuse were some of his proudest moments in office.

He added the life-saving opioid reversal drug Narcan into every county police car and started Missouri’s first prescription-drug registry, which now covers 80 percent of the counties in the state and 92 percent of prescribing doctors, preventing patients from getting multiple prescriptions from different prescribers.

Much of the cost is paid by federal funds so the registry doesn’t cost much compared to the benefit it provides, he said.

“The state wouldn’t act, so we acted,” Stenger said.

As for Proposition P, which was supported by nearly two-thirds of voters countywide and an even higher percentage in south county, Stenger said it’s already making the county safer with more officers in the St. Louis County Police Department and two-officer cars.

The department opened a new unit last month that focuses on community policing, and the council moved forward with plans for new precincts in south county and north county.

“We made a bunch of promises with Proposition P — two officers to a vehicle, roughly 100 more officers to St. Louis County, better training, dash cams and body cameras. Two new precincts, one north and one south,” Stenger said. “And I’m proud to say that we’ve delivered on every single one of our promises that we made with Proposition P… Proposition P has been really great for our community, and it’s going to continue to be good for our community because this revenue stream, it goes on forever. So we’re able to enhance our Police Department for decades and generations to come, which was really transformational for St. Louis County. So that was one piece to bring jobs and economic development and just have safety in our community.”