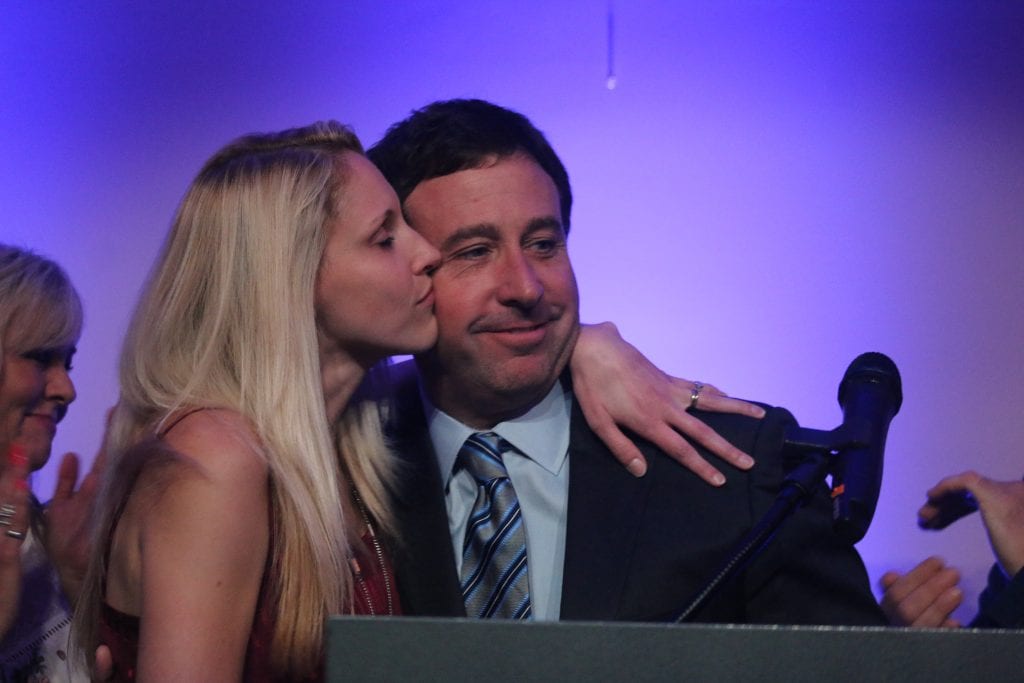 Pictured above: County Executive Steve Stenger and his wife, Allison, at his Aug. 7 victory party. Photo by Jessica Belle Kramer.

County Council Chairman Sam Page, D-Creve Coeur, called an emergency meeting after The Call’s press deadline Monday, where the council elected him the new county executive. Under the county Charter, the council majority, in this case Democrats, has to elect a Democrat either on or off the council.

Page and 1st District Hazel Erby, D-University City, emerged in the wake of the unsealing of the indictment Monday as the most likely candidates to succeed Stenger as county executive.

Erby would have been the first female county executive, and Page will have to quit his position as an anesthesiologist to take the $140,000-a-year position. To read ongoing updates on the vote, visit www.callnewspapers.com.

He also voluntarily surrendered his law license. The terms of his release on bond were undisclosed, and U.S. Assistant Attorney Hal Goldsmith, who oversaw the case, declined to say whether there had been negotiations with Stenger over his resignation and surrender of the license. He said that Stenger was not a flight risk.

Each of the three charges Stenger faces could result in up to 20 years in prison and a $250,000 fine, plus restitution.

The campaign arm of the proposed St. Louis city-county merger, Unite STL, said through spokesman Ed Rhode that the news was a reason to go forward with the merger. Rhode had also served as Stenger’s campaign spokesman, denying the charges that Stenger is now accused of.

“While the reunification effort is unaffected by today’s development, we do believe that it underscores the need for change and the potential benefit of reforming and streamlining St. Louis government.”

Stenger is married to his wife Allison, also an attorney, and they have two young children.

U.S. Attorney Jeff Jensen said that beginning in October 2014, before Stenger was elected to office, through Dec. 31, 2018, Stenger and “various individuals and companies” conspired to defraud taxpayers with bribery and concealing information through his official office as county executive.

The allegations center on Stenger’s interactions with businessman John Rallo, a Stenger campaign donor, and one of his companies, Cardinal Insurance.

The Rallo contracts, which include a deal to buy land in Wellston from the St. Louis Economic Partnership when it was run by Stenger ally Sheila Sweeney, are the latest in a series of pay-to-play allegations that have followed Stenger since he was the 6th District councilman representing South County.

At that time, neighbors of newly approved McBride or J.H. Berra subdivisions pointed to the donations those companies gave Stenger just after he directed approval of their zoning plans as councilman.

Goldsmith declined to go into too many specifics beyond the 44-page indictment, but he said that federal authorities conducted an undercover investigation into Stenger for more than a year, keeping the probe quiet during last year’s election cycle so as not to interfere with an election. Stenger won re-election to a second term.

“The charges are basically that the defendant deprived the citizens of St. Louis County of his honest services and there were mail services used,” Goldsmith said, “It was a pay-to-play scheme obviously. It involved bribes paid through political donations in exchange for his official acts in directing or awarding contracts.”

He noted, “We’re confident in our case.”

He hinted that close associates of Stenger wore wires in the investigation, noting that “any number of concerned citizens and witnesses” cooperated with authorities on the case. More people could be charged since the investigation is ongoing.

In addition to the U.S. Attorney’s Office for the Eastern District of Missouri and the Department of Justice, the FBI, the U.S. Postal Service and the IRS worked on the case. Goldsmith said the mail fraud charge was related to the honest services charge and just meant that mail was used in some aspect of the case.

A wide-ranging federal subpoena had been issued March 21 and revealed by Page days later, before the council voted to make it public.

Goldsmith said at the time the subpoena was issued, speaking generally, that federal prosecutors have to rely on grand juries to issue subpoenas since, absent an indictment or a trial, they don’t have that power themselves. In some instances, prosecutors could convene a special grand jury to examine one case for a year.

In part, the campaign issue was spurred by the council’s Ethics Committee chaired by 6th District Councilman Ernie Trakas, R-Oakville, who spearheaded an ethics investigation into Northwest Plaza and sent the council’s findings and thousands of documents to the state attorney general and the U.S. attorney’s office.

During the campaign, The Call asked Stenger if he was under investigation by state or federal authorities, or if he had been interviewed by any such authorities.