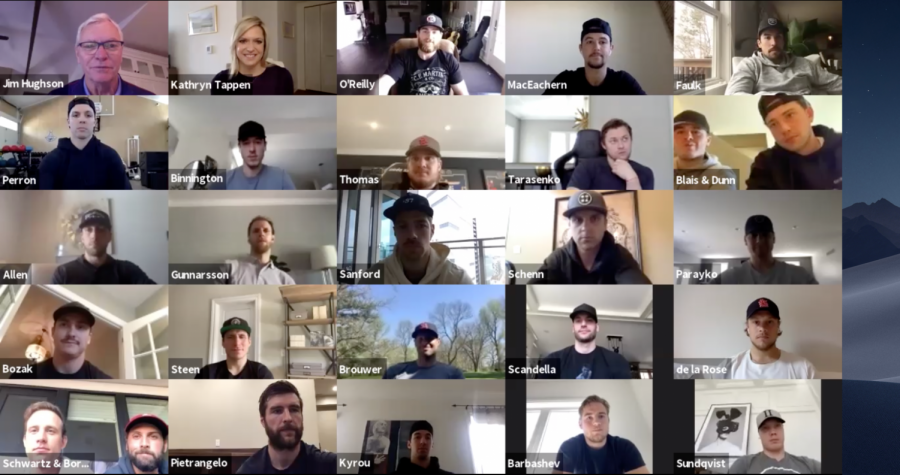 The 2019 Stanley Cup-winning Blues reunite in this sneak preview released by the NHL.

The 2019 Stanley Cup champion St. Louis Blues team will reunite virtually tonight to commemorate the scheduled first day of the 2020 Stanley Cup playoffs, which are suspended due to the coronavirus.

The National Hockey League is coordinating the reunion of current members of the defending 2019 Stanley Cup Champion St. Louis Blues via videoconference on Wednesday, April 8, but released a preview of the get-together to give fans something to look forward to.

This will mark the first virtual coming together of a professional sports team since the suspension of play, the NHL said.

Members of the current Blues roster, along with General Manager Doug Armstrong and Head Coach Craig Berube, will have a reunion via videoconference.

NBCSN will air the gathering on Monday, April 13, at 5 p.m. Central time.

A preview photo shows members of the current Blues team rather than the 2019 Stanley Cup-winning one.

Notably absent from the mix are Oakville native Patrick Maroon, a hero of last year’s playoffs who played for Tampa Bay this year, Robby Fabbri who was traded and Jay Bouwmeester, who was a key part of the team last year but went on long-term injured reserve after he suffered a cardiac episode while on the bench during a game earlier this year.

The gathering is the highlight of a new slate of programming and original content being produced by the NHL to keep fans connected to the game while practicing social distancing.

“We are really excited about this week at the NHL. Our players have been so interested in connecting with our fans and the lineup that we’ve put together is quite extraordinary,” NHL Chief Content Officer Steve Mayer said in a news release. “From our virtual press conferences to our Classic Games programming to the incredible reunion of the St. Louis Blues, this week will be remarkable as we keep adding new content every week.”