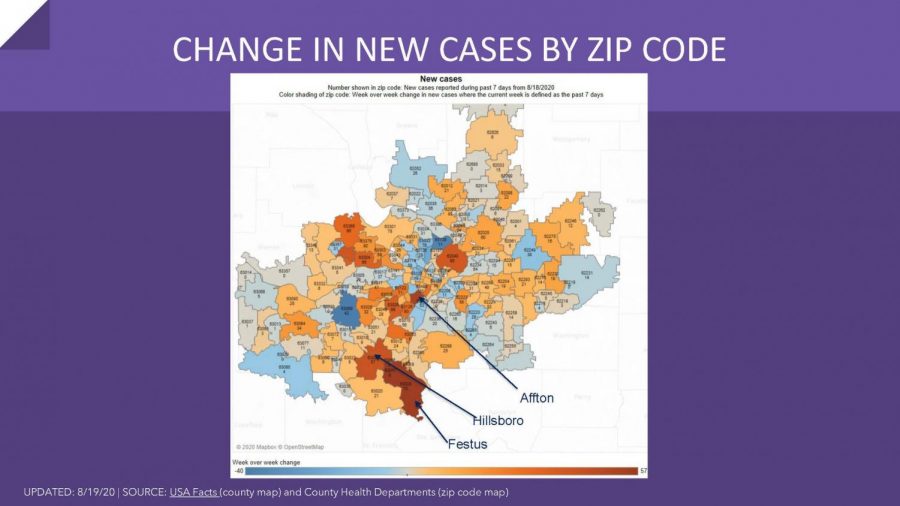 South County and Jefferson County are again identified as coronavirus hotspots Monday, this time with Affton, Hillsboro and Festus singled out.

The St. Louis region saw its largest single-day spike in COVID-19 hospital admissions Wednesday since the pandemic started, and once again, South County is being singled out by a task force of area hospitals as a coronavirus hotspot.

Dr. Alex Garza, SSM Health CEO and commander overseeing the region’s response through the St. Louis Metropolitan Pandemic Task Force, a collaboration of the four major hospital systems in St. Louis, once again identified South County and Jefferson County as the areas in the 15-county region with the highest number of new cases at his briefing Monday.

In a setback, the St. Louis region saw its largest one-day spike in hospital admissions in data reported Wednesday that lags two days. The four major hospital systems reported 71 new hospital admissions, up from 43 the day before. Before that, the seven-day moving average of hospitalizations had plateaued around the 40-a-day level for the last month, not improving but not getting worse, Garza said.

Daily admissions of 40 or above are the “red line” identified by hospital officials above which hospitals begin to have capacity issues for handling coronavirus patients.

But even as most of the region levels out in cases, South County continues to add the most new cases of any area. This time, Garza singled out the 63123 ZIP code of Affton, along with Hillsboro and Festus in Jefferson County. Two weeks ago, Garza said that the highest rates of transmission were in Oakville’s 63129 ZIP code along with Concord’s 63128, Sappington, Fenton and Arnold.

In two weeks, Affton went from 595 cases to 759 cases. Oakville has gone from 604 cases to 751 total cases. Concord has added 136 more cases in two weeks and 80 new cases in the last week for the highest total infection rate in South County according to tracking data posted at St. Louis University.

The trend was still “consistent with where we were two weeks ago where we were seeing a lot of cases down in the southern part of the metro area, so we continue to see those as well,” Garza said.

Fenton, which is partially in St. Louis County and partially in Jefferson County, remained a hotspot with 98 new cases in the last seven days.

Jefferson County, which does not have a mask mandate, is the only area in the region that has a transmission rate higher than 1 — which means the virus is spreading fast enough to increase.

Daily spike in hospital admissions is highest seen yet

Officials generally look at a seven-day moving average of daily data in order to prevent decisions being made on one-day spikes up or down, but the near-doubling of hospital admissions reported Wednesday was such a disturbing data point that Garza said it had to be considered.

“Our data for today, just to be blunt, is fairly alarming,” Garza said, adding, “We don’t like to look at the swings from one day to the next, but it’s hard to ignore such a significant increase.”

The 71 admissions in one day is the largest increase for a one-day total that St. Louis has seen throughout the pandemic. The increase was seen across all four major hospitals, so it was distributed throughout the region. Garza said data analysts would be looking at the case data to try to figure out any connection or link between cases, and he would know more at his briefing Friday.

The one-day spike was so large it took the seven-day moving average of hospitalizations from 39 to 44. Today marks the second day in a row that it rose after falling slightly for nearly two weeks.

Total hospitalizations jumped up 13 to 309 patients, the first time that the area has seen more than 300 COVID-19 patients since May 22.

Garza thanked health-care workers for their hard work: “We know that they’re getting busier now which is regretful, but we appreciate all the hard work that these people are doing.”

Numbers had been plateauing, headed in the ‘right direction’

The good news in the numbers Garza presented Monday was that overall — except in South County — the region was not trending upward and was headed in the “right direction,” Garza said at the time. But the bad news was that cases weren’t going down either, illustrated by the sharp turnaround Wednesday.

“We’re not interrupting transmission significantly but also cases are not going up significantly, so we’re also in this holding pattern now which is a little bit frustrating,” Garza said Monday. “We’d certainly like to see that number go down —  but again, barring any significant actions, either people consistently wearing masks throughout the metropolitan area, things like that, then we’ll probably hover around this for awhile.”