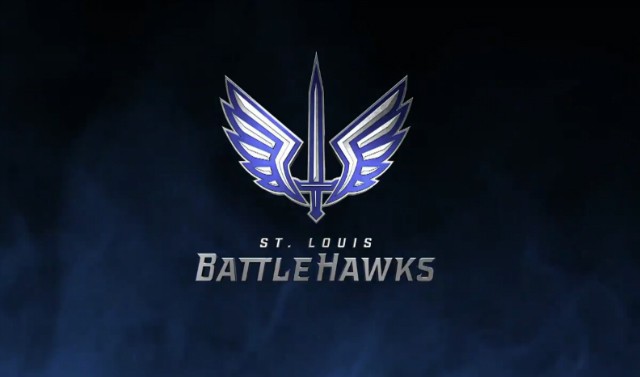 Professional football is returning to St. Louis next year.

St. Louis is one of eight cities that will get a team in 2020 as part of a new professional football league, the XFL.

The league unveiled the team names and logos for its eight cities last month. The team that will play in The Dome at America’s Center will be called the St. Louis BattleHawks, with a logo depicting aviation-inspired wings and a sword a la King Louis IX, the city’s namesake and famous Art Hill statue.

The league is the successor to the failed original XFL that lasted one season in 2001, this time with all new teams. Both are owned by WWE owner Vince McMahon.

This time, the XFL bills itself as more fan-friendly than the NFL. It will employ no cheerleaders and no players with arrest records, and players will have to stand for the national anthem.

The league unveiled team descriptions with each new name that XFL President and COO Jeffrey Pollack likened to “manifestos.”

According to the XFL, the BattleHawks are: “Winged warriors. Preparing for flight. Preparing to fight. They await their orders. They attack as one. Diving, dodging, swooping, striking. Their mission: Create chaos. Their mandate: Win at all costs. The St. Louis BattleHawks. Cleared to engage. February 2020.”

The other teams that will play in the XFL are the Dallas Renegades, Houston Roughnecks, Los Angeles Wildcats, Seattle Dragons, DC Defenders, New York Guardians and Tampa Bay Vipers.

Slate called the XFL’s team announcements “the most affecting poetry ever written.”

Here’s a sample: “Deep in the heart of Texas,” the Dallas Renegades are “hell on wheels, between hash marks.” The Houston Roughnecks are “brawlers in blackened dirt. The scratching, grinding, never-bending few.”

The LA Wildcats are “showtime with a snarl. This is our time to roar. Unleashed February 2020.” The Seattle Dragons are “your darkest fantasy, in cleats. Breathing fire February 2020.” The DC Defenders are “Glory through grit. Victory through valor.” The New York Guardians are “watchdogs over the metropolis… They are the first line of defense, and there is no need for a second.” The Tampa Bay Vipers are “cold-blooded by nature. Luring all who challenge them into the jaws of defeat. Ready to strike February 2020.”

A viral tweet from Buffalo Wild Wings outlined the excellent year so far for St. Louis sports fans: In hockey, the Blues won the Stanley Cup. In baseball, the Cardinals were playing in first place. In soccer, the city got an MLS team. In football, the BattleHawks were announced and the Rams lost in the Super Bowl, with owner Stan Kroenke looking on.