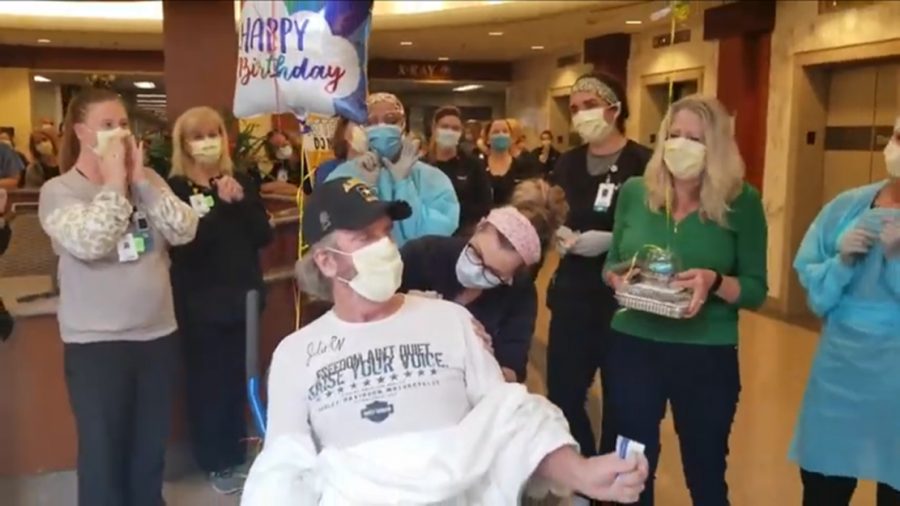 ‘Code Sunshine’ is a welcome birthday gift: After being admitted for COVID-19 to Mercy Hospital South on his daughter’s birthday, April 2, Bill finally went home in late April with his wife, Lynn – on his own 68th birthday. Bill, a COVID-19 patient who only wanted to provide his first name, spent three weeks at Mercy Hospital South, with a week on a ventilator and two weeks in intensive care.

The COVID-19 pandemic continued to rage out of control in Missouri over the weekend as the St. Louis metro area considers new coronavirus restrictions and lawmakers travel to Jefferson City to vote on a $1.3 billion package of relief aid.

St. Louis County Executive Sam Page, at a news conference Monday morning, urged everyone in the county who could do so to stay home, working from home if possible, and avoid large gatherings.

“Within a week or two, if this curve does not plateau, or at least bend, we are going to have to do things differently,” Page said.

The Department of Health and Senior Services reported 3,244 new confirmed infections statewide on Monday, the fifth consecutive day of 3,000 or more cases and the sixth day overall to reach that number. Over the weekend, the department reported two days with more than 4,000 new cases, including a new peak of 4,559 on Saturday.

Over the past seven days, the department has reported 24,255 new COVID-19 cases, more than 11 percent of all cases since the first was reported in March.

New restrictions in the county will be gradual, Page said.

“Whatever we do moving forward will be measured and will be based on what we think will have the best effect,” Page said.

The news that Pfizer’s vaccine is 90 percent effective and has no significant safety issues is good news, but inoculations for the general public are months away, Page said.

On Friday, the St. Louis Metro Pandemic Task Force warned that hospitals in the region are continuing to see record numbers of new patients and are in danger of being overwhelmed.

“Things are already worse than they have ever have been and they are getting worse day by day,” Dr. Alex Garza, head of the task force, said.

Garza spoke after the hospitals reporting to the task force had their highest single day of hospital admissions on Friday, with 97 new patients being treated. That was followed Saturday by another new high of 99 admissions.

“We are heading into an extremely dangerous time,” Garza said. “There is so much virus in the community, it’s frankly beyond frightening.”

Statewide, hospitalizations exceeded 2,000 for the first time on Saturday, data from the state health department shows. With new cases reported in 115 of 117 local health jurisdictions on Monday and per capita infection rates highest in rural parts of the state, hospital capacity is not just an issue for the St. Louis area.

The number of patients on ventilators reached a new high of 254 on Thursday, the latest available data from the Missouri Hospital Association shows. And on Friday, hospitalizations in Boone County’s three providers hit 123, the most of any point in the pandemic.

“At some point, there will no more capacity,” Garza said. “We’ve seen tremendous growth over the last few weeks. The curve is much steeper than what it’s been in the past. It’s certainly not a gradual growth. It’s a very rapid growth and we’re seeing that in cases and hospitalizations.”

The increase in cases is taking a major toll on health care workers, said Garza, who is chief community health officer for SSM Health.

“Our staff is depleted, from being quarantined or sick or frankly, some people are leaving the workforce because they’re tired,” Garza said. “We’re starting with a deficit from a personnel perspective. It’s all adding up to be a worse situation than we were in the spring.”

The General Assembly was set to begin work in earnest Monday on the $1.3 billion spending package proposed by Gov. Mike Parson. It includes $752 million for a variety of pandemic programs and to receive returns of federal aid unspent by counties. The spending plan also includes $18.7 million for programs to prevent homelessness, boosting total funding for that purpose to $28.3 million, and a $96 million appropriation to distribute child support payments intercepted from federal stimulus payments and unemployment benefits.