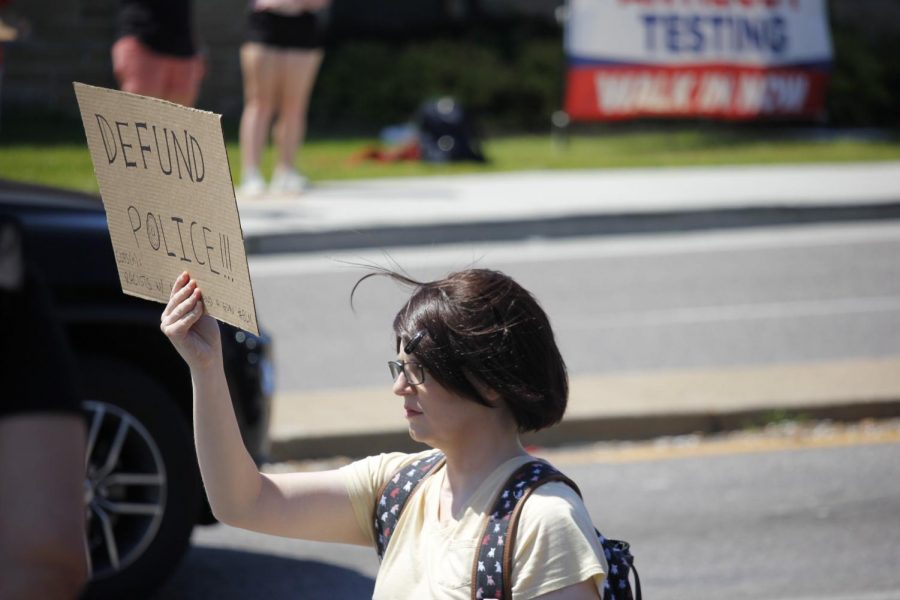 Protesters gathered at the intersection of Gravois and MacKenzie roads to support the Black Lives Matter movement June 6. Some protesters' signs, like that above, called for defunding the police.

County Executive Sam Page and Urban League President and CEO Michael P. McMillan jointly announced on Monday the start of what they called a “comprehensive review of public safety in the St. Louis County Police Department.”

The review, which will be led by two “nationally recognized” former police chiefs, will examine how best to implement effective community policing strategies in St. Louis County and review use-of-force training and practice, according to a county news release.

The review “will review policing, help reduce violent crime, and protect civil rights,” according to the announcement. “It will explore the best ways to provide instruction, including cultural, racial, and community sensitivity training, de-escalation training, and implicit bias training. It will also explore the roles that police officers play in the public safety system – including an important review of where other professionals, such as nurses, advocates and social workers can provide a more tailored response in cases such as domestic violence, substance abuse, and mental health crises,” a move advocated by supporters of the “defund the police” movement that has gained momentum in the wake of the death of George Floyd in Minneapolis.

“In the aftermath of the murder of George Floyd, as we have seen millions of people all across our country and in this community call for change, and we have been having conversations with leaders of our civic and business community about how they can help us confront this crisis as well… This review is an incredible opportunity to identify and enact meaningful steps to improve policing and protect civil rights,” McMillan said in the release.

The review will be entirely privately funded by Civic Progress companies and the St. Louis Regional Business Council. No tax dollars will be spent on the review.

Page spokesman Doug Moore referred questions about the potential cost of the study to Civic Progress, along with what companies would be funding the review.

“This has been a months long conversation with many members of the community, including business leaders, Ray Price the chairman of the Police Board, the Urban League and St. Louis County Prosecutor Wesley Bell,” Moore said in an email. “Out of those conversations, Civic Progress agreed to step up and pay for this review.”

But the review wasn’t without its critics. In a tweet, former St. Louis County Chief Tim Fitch, now the member of the County Council representing the 3rd District, said that Page has no authority to impose a review on the department.

“The interim County Executive needs to read the Charter of St. Louis County,” Fitch tweeted. “He has NO authority to bring in outside consultants to review the police department. He has introduced more politics into policing than the last 2 County Executives combined.”

That last statement was notable coming from Fitch because in his last months as chief in 2013, he was at the center of a struggle over control of the police board in which members of the County Council alleged that County Executive Charlie Dooley wanted to remake the police board to oust Fitch as chief.

Price and Barton have assigned the county department’s Lt. Col. Troy Doyle to provide essential coordination with the review, Page said. Some residents of the county told the police board during a series of listening sessions that they wanted Doyle to be chosen as chief, but the board hired Barton instead. Doyle would have been the first African American county police chief, while Barton is the first woman to hold the position.

“It is important that we rise to the challenge of strengthening a public safety system that protects and serves all of us and keeps all of our residents safe from violence,” Page said. “At the same time, we have to confront another crisis in our country and in our region. Systemic racism is ingrained in St. Louis and in our institutions, including law enforcement. We have to have the humility to recognize where we fall short and the urgency to do something about it.”

The Democratic members of the County Council objected earlier this month when, at their first introductory meeting with Barton, the police chief said she did not see evidence of broad systemic racism in the department. The next day, she acknowledged a racial divide in the department.

The review will be conducted by Chief Charles Ramsey and Chief Daniel Oates.

Oates has spent two decades as a leader in the New York Police Department. He also led the police departments of Ann Arbor, Michigan; Aurora, Colorado; and Miami Beach, Florida, where he oversaw significant reforms to strengthen police-community relations, institute strong accountability measures to address misconduct, and make communities safer by reducing violent crime, the county said in the release. He is considered one of the foremost experts on community policing in the country, the county added.

Bell said he was encouraged by the scope of the review.

“The St. Louis County Public Safety Review is an opportunity to take a proven, data and research driven approach and use it to address our public safety challenges,” Bell said. “We have to be able to talk about implicit bias and cultural sensitivity because that’s the only way to address the culture changes needed in law enforcement and allow us to move St. Louis forward in a meaningful way.”