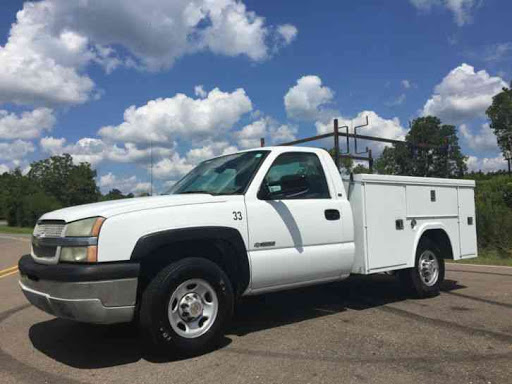 This photo provided by the St. Louis County Police Department shows what the stolen truck looks like, although it is a different truck.

Editor’s note: This article has been updated after the truck was found due to a citizen’s tip.

Police from the South County Precinct were called to 347 CCC Road in Jefferson Barracks Park at 5:41 a.m. Tuesday, Dec. 15, to investigate a burglary.

The parks-owned truck is a white 2004 Chevrolet 2500, similar to the one pictured above, with a utility-style rear and “St. Louis County Parks” written on its doors. The photo below is an actual photo of the truck, but the other picture shown above is included to give a better indication of what the truck looks like.

The license plate on the truck is St. Louis County Plate 109270.

Anyone who saw the truck is asked to contact the St. Louis County Department of Parks and Recreation or the county Police Department “without delay.”

Police noted, “The intentions of the suspect(s) with the vehicle are unknown.”

To remain anonymous or potentially receive a reward, contact CrimeStoppers at 1-866-371TIPS(8477) if you have any information regarding the incident.