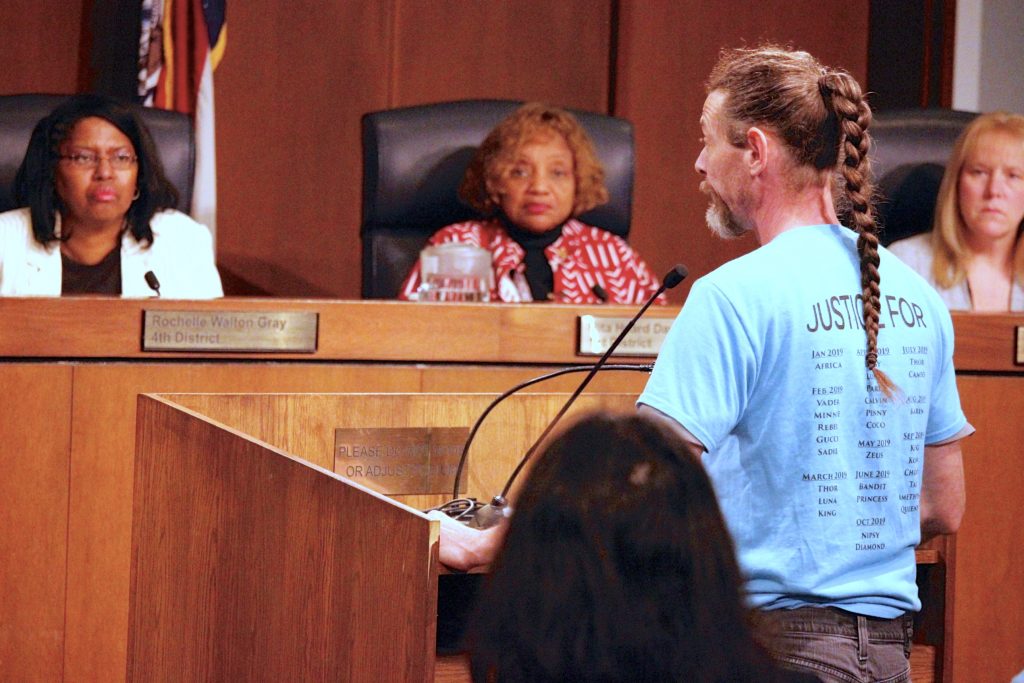 A volunteer from the St. Louis County animal shelter addresses the county council about the treatment of both volunteers and animals at the shelter at the Nov. 5 meeting. Photo by Erin Achenbach.

After years of problems, the St. Louis County animal shelter is getting new leadership.

Duris’ salary was not immediately available to The Call. The newspaper has outstanding Sunshine Law requests to the animal shelter for the salaries of other employees that have not yet been fulfilled.

The shelter is run by the county Department of Public Health.  Its acting director, Spring Schmidt, named Duris as the head of animal control, which has not had a permanent director in place since former Director Beth Vesco-Mock was fired in March 2018.

Duris worked previously as the executive director of Iberville Shelter and Animal Control in Plaquemine, Louisiana, which has a population of 7,119 compared to the million residents of St. Louis County.

At the Louisiana shelter, St. Louis County said in a news release that Duris implemented successful adoption, foster and volunteer programs that resulted in the rehoming of thousands of animals.

“Those practices are still being applied today with great success,” the county said in its announcement.

Prior to her role as the executive Director at Iberville, Duris’ “passion and dedication for animals” led her to assist in the rehabilitation of severely injured birds impacted by the BP oil spill in the Gulf of Mexico, the county said.

“I am thrilled for the opportunity to positively impact the lives of both the animals and the community that this shelter serves,” Duris said in the news release. “I firmly believe together we can help the community realize the potential this shelter has by establishing high quality, high volume spay/neuter clinics, increasing adoption, implementing foster programs and working with a main portion of this culture, the volunteers. It can be done.”

In the last meeting of the Animal Care and Control Advisory Board Oct. 17 before the County Council disbanded it last month, Schmidt said she was in final-round interviews with possible directors, with two good candidates.

In order not to repeat the dispute over the hiring of Vesco-Mock, who had a volatile history in her previous position, Schmidt said that county employees were doing “media and social media dives” before the second-round interviews this time.

That is “what made second-round interviews interesting,” Schmidt said. “We don’t normally do that. We took quite a bit of caution in that phase. Of the two candidates, neither are dragging controversy behind them in terms of this position so that would be exceptionally good.”

After speaking to the candidates about their philosophies, Schmidt told the board she was “cautiously optimistic” about getting better leadership at the shelter.

Schmidt said in the release, “We are pleased that someone with the experience and leadership skills that Dr. Duris will bring to Animal Care and Control. ACC has faced significant challenges the last few years, including the implementation of the audit recommendations. Finding the right leader with proven knowledge and success in this role is a huge win for the animals, the community and the Department of Health.”

The Department of Public Health said it also announced earlier this month that Mandy Ryan will be joining ACC as the population manager effective Dec. 16.

The department has not yet provided her salary to The Call after a Nov. 13 request.