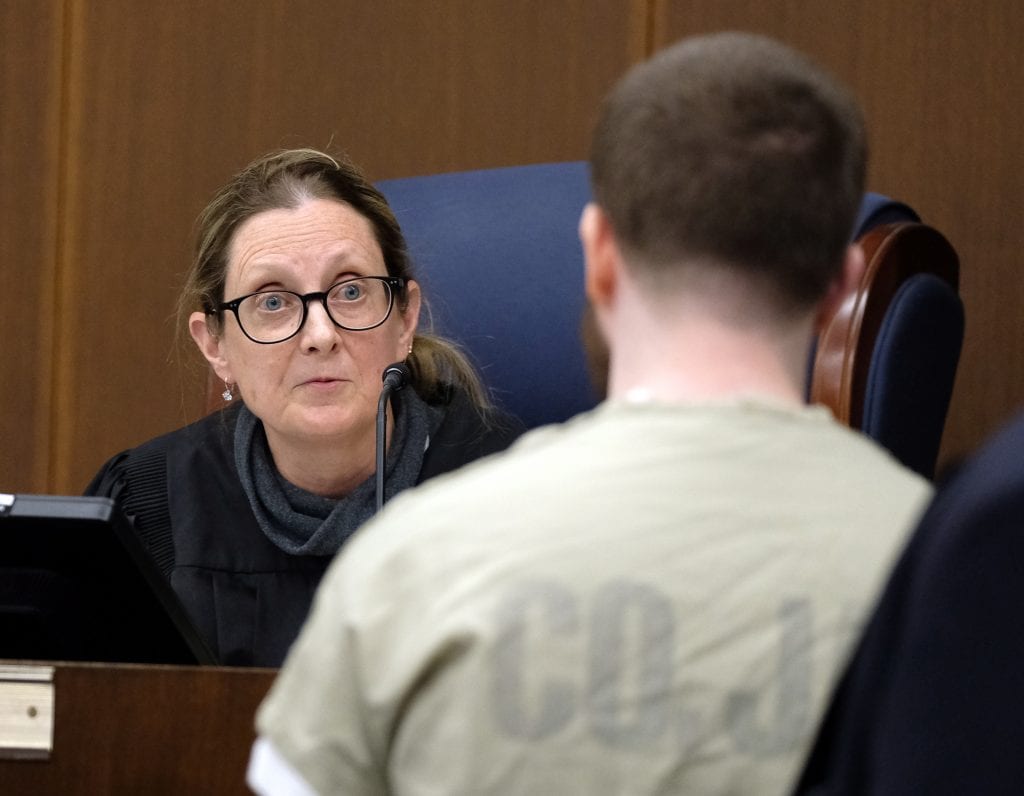 St. Louis County courts will continue to stay closed to in-person proceedings due to the rising trend of coronavirus cases in the community, including the death of a court employee.

The courts have been shut down to in-person proceedings since July 20, after several employees tested positive for the coronavirus. An employee was hospitalized July 29 with symptoms of COVID-19 and died soon after.  Another employee who was asymptomatic tested positive, prompting a work-from-home quarantine for employees who had been working with that staff member.

Presiding Judge Michael D. Burton made the decision after two weeks at the higher restrictions to continue in “Phase Zero,” with no set end date.

Although public access to the courthouse will be limited, it will not end, especially for all court filings and for emergency domestic-violence orders. Hearings and trials will continue through videoconferencing. Everyone must wear masks and have their temperatures taken before entering the building.

“The courts are an essential public service, and the wheels of justice must continue to turn,” Burton said in the announcement to go to Phase Zero in July. “Our judges and I.T. staff have developed innovative ways to make that happen remotely. Yet, with the number of cases of COVID-19 rising sharply in St. Louis County and throughout the state, an additional level of caution is necessary to protect the health of our employees and the public. It is essential that we reduce personal contact and density in our building as much as possible to slow the spread of the virus.”

Starting that week, as many employees who can work from home are again working from home.

No St. Louis County jail inmates or employees have tested positive since July 16, according to the latest data released last week. The jail is attached to the courthouse complex. Those who have tested positive have been inmates entering the jail, getting the virus from community spread.

Spring Schmidt, acting co-director of the St. Louis County Department of Public Health, told the court when it returned to Phase Zero that she is “extremely concerned” about the number of new cases of COVID-19 in St. Louis County due to increased community spread. Schmidt said she expected the upward trend to continue as schools reopen.

As directed by the Missouri Supreme Court on May 4, judicial circuits cannot rush to “open their doors” during the COVID-19 pandemic. They must do so gradually.

The court developed four phases, zero through three, to allow for this process. In determining whether changing phases is appropriate, the court provided the following specific “Gateway Criteria” to consider:

“1. No confirmed COVID-19 cases in the court facility within a 14-day period.

2. Rescission or lack of stay-at-home orders or the relaxing of group gathering restrictions applicable to the community.

3. Improving COVID-19 health conditions over a 14-day period in the community, including conditions such as the number of confirmed COVID-19 cases and related deaths in relation to a community’s population density, size of particularly vulnerable populations, and availability of medical facilities including emergency and intensive care capacity.

4. Consultation with local health officials or departments concerning changes to levels of court and courthouse activities.

Starting on May 12, the 21st Circuit has engaged in phasing discussions with judges, law enforcement officers, court administrators, prosecutors, public defenders, juvenile officers, Department of Public Health officials, probation officers, bar leaders and others, the court said in a news release. These discussions occur on a weekly basis, and will continue even after the St. Louis County circuit enters Phase 3, as the possibility of moving back to a lower phase always remains, depending on the status of the spread of the virus.

The court will stay in Phase Zero, as it has been since July 20.

Factors that the circuit considered when it made the decision last week include the following:

1. Courthouse Staff: On July 29, a court employee was hospitalized for COVID-related symptoms and died shortly thereafter. The Department of Public Health has been contacted for contact tracing.  Cleaning and disinfecting of areas

where the employee had contact is being done. Staff members who have had exposure to the employee are now quarantined.

On Aug. 3,  a court employee, who was asymptomatic, received a positive test result. This employee had been at work in the courthouse that day. The employee is currently on a 14-day quarantine. All fellow employees in the department where the employee works are now working from home after being tested. Half of the test results have already been received: all are negative.

2. DJS Jail and Detention Staff: The last positive result from any employee of the Department of Justice Services or the St. Louis County Detention Center was July 16.

3. DJS Jail and Detention Residents: As of Aug. 3, the DJS jail population of COVID-19 positive patients had grown to 22 residents, with 17 new cases in

July. As the DPH chief operating officer indicated, this growth “seemingly aligned with the trends of our community.” These inmates were all new to the facility and

asymptomatic. All of these inmates had been quarantined and remain as such.

St. Louis County has had the most COVID-19 cases and deaths of any county in Missouri. As of Wednesday Aug. 5, the total number of known cases in

To help put these numbers into context, St. Louis County has less than one-sixth of Missouri’s population.

The task force said there were 55 new daily admissions on Sunday, which marked the second time the number topped 50 within the past week. The seven-day

rolling average of daily hospital admissions has increased to 44, marking the highest seven-day rolling average in the St. Louis region since May 3. That

average peaked at 58 on April 10 and then dropped to 14 in late June, before steadily increasing again through July.

“Any time … that rolling seven-day admissions gets above 40, we know that that is in our red zone,” said Garza. “That’s when we start to be really concerned about the number of patients that are showing up in our healthcare systems.”

“Local hospitals reported admissions of 39 new cases Wednesday (Aug. 5) – a drop from 55 registered the day before.” Nonetheless, “that total, along with others from recent days, reaches a level not seen since the early stages of the pandemic.” (Source: St. Louis Post-Dispatch, Aug. 6). “It builds on the narrative that we have too much virus circulating in our communities,” said Garza. “We’re far from out of the woods.” (Source: St. Louis Post-Dispatch, Aug. 6).

Dr. Garza also said the reproductive rate of the virus was greater than one throughout the St. Louis area. According to Dr. Garza: “This clearly shows that

5. Missouri: On Sunday Aug. 2, Missouri had 582 new COVID-19 cases, the lowest number since a two-week window where the state broke its daily record of positive tests seven times since July 20. This new case number is similar to the level Missouri saw at the beginning of July. Missouri saw its daily positive test count peak July 30 with 2,084 cases. Friday’s 1,489 reported cases was the 11th consecutive day in which Missouri reported more than 1,000 positive tests. (Source: St. Louis Post-Dispatch, Aug. 3).

On Aug. 4, the rolling average of new daily COVID-19 cases in Missouri fell for the fifth straight day. Following a sharp increase during the month of July, the seven-day average of new cases fell to 1,322, which is down from last Thursday’s peak of 1,591. (Source: St. Louis Post-Dispatch, Aug. 5).

On Aug. 1, Gov. Mike Parson indicated that Vice President Mike Pence called him to offer resources to help Missouri fight COVID-19. Following the recent surge of cases, the White House’s coronavirus task force added Missouri to a list of 21 states considered to be “red zone” states. The task force defines a “red zone” state as one with more than 100 new cases per 100,000 people in the past week ending on July 24.

Gatherings in St. Louis County are limited to no more than 50 people; bars must close by 10 pm every night, and businesses’ occupancy will be rolled back to 25 percent from 50 percent capacity (the level it was in June). The updated restrictions went into effect on Friday, July 31, 2020 and are expected to be in place for the next four weeks.

The St. Louis Metropolitan Pandemic Task Force was consulted and supports the new guidelines and restrictions. Task Force Commander Garza said these decisions are not taken lightly, considering their impact on people’s livelihoods, but St. Louis County “must take these steps if we want to flatten the curve, get our kids back playing sports and in school full-time, as well as keep everyone safe and healthy.” (Sources: St. Louis Post-Dispatch and KMOV.com, July 28).

7. Additional Supportive Information: “Six more school systems across St. Louis (Clayton, Parkway, Pattonville and Webster Groves districts in St. Louis County; KIPP and Lift for Life charter schools in St. Louis City) on Wednesday joined the growing list of area districts that will start the school year with virtual instruction.” They will offer online-only classes for the first quarter of the 2020-2021 year. Other districts that have moved to an all-virtual start to the 2020-2021 school year include Affton, Ferguson-Florissant, Hazelwood, Kirkwood, Maplewood-Richmond Heights and Ritenour. St. Louis Public Schools also is expected to start primarily online. (Source: St. Louis Post-Dispatch, July 30).

Accordingly, after the aforementioned consultation and consideration, the 21st Judicial Circuit will remain in Operating Phase Zero on Aug. 6. The court’s phase status will continue to be reviewed on an ongoing basis.

WHAT DOES PHASE ZERO ALLOW?

According to the Missouri Supreme Court’s May 4 directives, during Phase Zero all in-person proceedings must be suspended, with very few designated exceptions.

The Supreme Court, however, did not mandate the suspension of court operations; it simply indicated that proceedings continue, but through videoconferencing and other means.

Due to the current pandemic, however, this court strongly encourages the public to visit the St. Louis County Circuit Court’s website. The website provides means to participate in proceedings and avoid physically entering the building. For example, petitioners can obtain orders of protection through online filing.